<img src="https://www.qromag.com/wp-content/uploads/2010/08/thescribblenautslowlight.jpg" alt=" " />The two MCs and one DJ that make up this Boston based hip-hop trio don't reinvent the wheel on their recent EP. ... 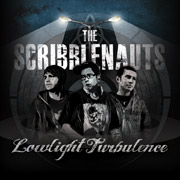 The two MCs and one DJ that make up this Boston-based hip-hop trio don’t reinvent the wheel on their recent EP Low Light Turbulence.  It’s often said that every story ever told is derived from six or seven basic human plots; in the world of hip-hop the number seems to be closer to two or three.  The familiar themes of frustrated ambition, moral temptation, and personal tragedy in the urban landscape are the treadmill of rap.  But if the glove does fit, the artist is legit.  The Scribblenauts successfully glom onto these narratives with their own personal spin, telling honest stories from the perspective of hard-nosed street kids who know they don’t have it the worst, or the best, rather (like most of us), somewhere in between.

That sense of moderation pervades the entire album, from the lyrical flows that never run too fast nor too slow, to the tasteful turntable stylings of DJ Emoh Betta, who knows how to fashion a compelling beat without getting flashy.  H.W. and Redlist handle the rhyming duties, trading stanzas back-and-forth like old friends.  Like the Giant Steps-era sax of Coltrane, the vocals exhibit an overall evenness of tone that boasts a cumulative strength over the course of the album.  There’s no jaw-dropping lyrical moments, no alliterations from Planet Xenon, no screeching, crying, shrieking; instead the Scribblenauts keep the keel fairly steady to let your attention be drawn towards the poetry of the spoken word, which is, for the most part, outstanding.  The most consistently compelling character that rises out of these narratives is usually "Josh", who figures to H.W. the way that Marshall Mathers figured to Slim Shady.  Everyone always wants to see behind the curtain – the trick is to show them just enough to keep hold of their attention.

Club bangers aren’t really the Scribblenauts’ wheelhouse, but a more booming bass line could turn "Harder To Be" into a reliable dance number.  Apart from some sweet scratching on "Sands of Time", DJ Emoh Betta is a fairly conservative presence on Low Light Turbulence, providing the proper stage for the spoken word to have its day, and then stepping out of the way.  That willingness to be a team player is one of the reasons that Scribblenauts works so well as an ensemble, and their EP is beautifully produced album that grows with repeated playtime.  For Boston hip-hop, you can’t do much better than Scribblenauts these days (kudos for shouting out the T in "Black Mirrors").  H.W., Redlist, and DJ Emoh Betta would probably be glad to have at least one no-brainer, "blow your doors off" single on the album to hook casual listeners, but hey, who wouldn’t?