The Silent League : …but you’ve always been the caretaker

<img src="http://www.qromag.com/wp-content/uploads/2010/01/thesilentleaguebutyouvealways.jpg" alt=" " />Maybe The Silent League should have stayed that way. ... 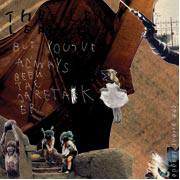 In the twenty-first century, indie-rock has seriously embraced the orchestral, from the massive success of Arcade Fire (QRO live review) to the more esoteric one-man work of Beirut (QRO photos).  Collaborating with both those bands and others has been Brooklyn’s Silent League, an orchestral outfit centered on founder Justin Russo (formerly of Mercury Rev).  Unfortunately, The Silent League’s own work has been just what you don’t like about orchestral indie, and they keep that pace with their third album, …but you’ve always been the caretaker.

With fifteen songs coming in at under fifty minutes total, caretaker at least isn’t stocked with epic, eight-plus minute-long chamber odysseys.  But it’s got a bunch of other faults.  There’s Russo’s high, annoying warble of a voice, taking away from the orchestral nature of "When Stars Attack!!!" – though he wouldn’t be the first multi-instrumentalist to fail with vocals (see Daniel Hart as The Physics of Meaning – QRO album review).  Sometimes he translates it through a ‘future vocode’, which doesn’t really help.  There’s a reason one of the top tracks is the moving forward instrumental "Rules of Disengagement" (reminiscent of "Spider (Kidsmoke)" by Wilco – QRO live review).

Click here for photos of The Silent League at 2010 Truck Festival in Steventon, U.K. in the QRO Concert Photo Gallery

Click here for photos of The Silent League at Gramercy Theatre in New York, NY on January 16th, 2010 in the QRO Concert Photo Gallery

But that isn’t the only problem on caretaker, as most of The Silent League’s tricks feel showy – like ‘tricks’, and not good ones.  "There’s a Caretaker In the Woods" is too bright & sweet, while the following "Sleeper" is way too distant in its low volume.  While the instrumental jam on "Rules" works, the ‘throw everything in at the end’ on the preceding "The Ohio Winter Conventioneers" doesn’t (and that title sounds like it was stolen from another of today’s indie-orchestral auteurs, Sufjan Stevens – QRO live review).  The only time The Silent League actually succeed, and then only after a fashion, is when they go indietronica, such as the future-tronic "Yours Truly, 2095", whose catch makes up for its cheese, or the bigger, stronger indietronica uplift "Resignation Studies".

Indie-orchestral’s heyday was at least a few years in the past (certainly before Arcade Fire’s disappearance), and it has to stand on its own merits these days.  Sometimes it succeeds, such as the new release from Owen Pallett (Final Fantasy), Heartland (QRO review).  But it doesn’t here.