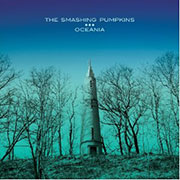 The latest Smashing Pumpkins album Oceania is a mixed bag of emotions.  Many purists maintain that the band died when original guitarist James Iha and bassist D’arcy Wretzky didn’t return when Billy Corgan reunited the group in 2005.  Furthermore, purists believe the final nail was driven into the coffin when longtime drummer and Corgan collaborator Jimmy Chamberlin left the band in 2009.  But in true Billy Corgan fashion, he just keeps on trucking.

When considering why Oceania is a mixed bag of emotions, the main thing is how similar it sounds to the Pumpkins of the ‘90s, the decade they are most loved for.  However, the Pumpkins of old and present day Pumpkins are two entirely different groups of people, save for Corgan.  Given that fact, it has become an age-old question to ask if Corgan made up the genius of the group all along.  Were Iha, Wretzky, and Chamberlin just spot fillers?  New drummer Mike Byrne’s tom-heavy technique certainly sounds similar to Chamberlin’s drumming style, especially on the album’s opening track “Quasar”.  Also, has anyone ever truly found an answer regarding why Corgan prefers to work with female bassists?  Female bassists are awesome, there’s no doubt about that, but does he have some formula for what band members he has to have?  Perhaps we’ll never know the answers to these questions.

Click here for photos of The Smashing Pumpkins at Chaifetz Arena in St. Louis, MO on October 18th, 2012 in the QRO Concert Photo Gallery

Click here for photos of The Smashing Pumpkins at Stubb’s in Austin, TX on September 27th, 2012 in the QRO Concert Photo Gallery

Click here for QRO’s review of The Smashing Pumpkins at Oceania release party at iHeartRadio Theater in New York, NY on June 19th, 2012

Trying to ignore all the gnawing questions and focusing on Oceania itself, there are many things to enjoy about it.  One fresh thing is how synth-heavy it is on songs like “Violet Rays”, “One Diamond, One Heart”, “Wildflower”, and the extremely enjoyable “Pinwheels”, which sounds oddly similar to something The Who would have released.  It’s a simple, upbeat song that has a really positive vibe.  It would have been interesting to see how the overall feel of Oceania would have changed had it been the opening track, but hey, it’s a good song no matter where it falls.

One of the small downsides to Oceania is that it’s fairly clear that Billy Corgan may not have the lyrical knack he used to.  This is nowhere more evident than on “The Celestials” with the phrase, “Till the end I’m gonna love you one-hundred-one percent.”  Another place where listeners are left wondering what he was thinking is the first lyrics of the album when he sings, “God, right on / Krishna, right on / Mark, right on / Yod He Vau He Om / Let’s ride on / Right on / Ride on.”  Is he trying to claim that he has reached some higher state of mind or being?  Or could Billy Corgan have finally become crazy enough to think that he is on the same level as the beings he calls out?  Either way, he has often proved that he has a unique way of thinking and an equally unique way of approaching music and even though with its sound and style Oceania is very clearly a Smashing Pumpkins album, it’s a breath of fresh air because in many ways Corgan still knows what he’s doing.

One thing is certain, regardless of what people may or may not think, Billy Corgan is going to continue to do his thing.  Having been referred to as an “album within an album,” it has yet to be clarified if Oceania is part of the 44-song epic Teargarden By Kaleidyscope that Corgan has been releasing one song at a time over the last three years or if it will be in addition to it.  With these massive undertakings it’s clear that Corgan doesn’t plan to retire any time soon and at the very least it will be entertaining for the general public to be along for the wild ride.