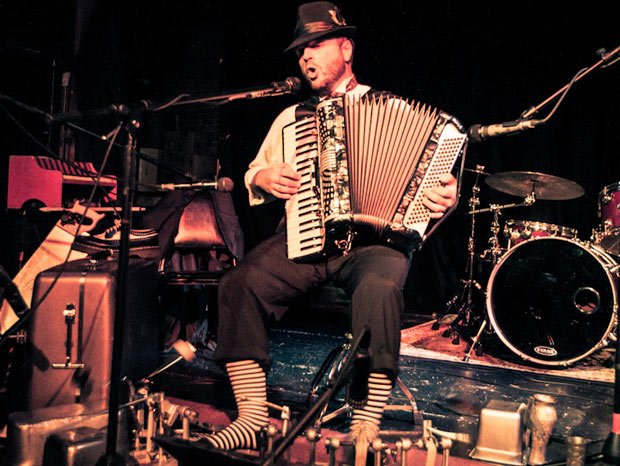 One-man-band multi-instrumentalist Jeff Holt, a.k.a. Mono Operandi, set the stage at Someday Lounge in Portland on October 10th with an accordion driven engagement that Holt kept casual as well as personal, eventually confessing that, “This shit is a lot harder than it looks.” 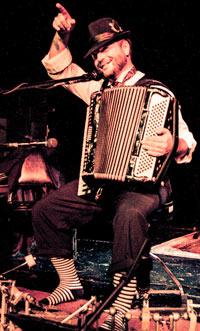 As a lone musical performer, the lyrically driven emphasis seemed to grab from a volume of personal experience from drugs to everlasting life on drugs and the fragility of what might be left in its wake with Holt’s cover of Leonard Cohen.  “Everybody knows, that’s how things go… you live forever when you do a line or two.”

Mono Operandi was more like a machine in practice, jacked into the rhythm with a structure revolving about simply by the movement augmented tempo that Holt had to keep track of just to stay on beat.  It looked as difficult as twirling your fingers in opposite directions actually is.  With that though, the sparse crowd on a chilly Portland Wednesday couldn’t help but stare in wonder with appreciation.  Moreover, with the Bee Gees’ “Stayin’ Alive” cover closing out the set, Mono Operandi left the audience with a lasting impression and sing-along close. 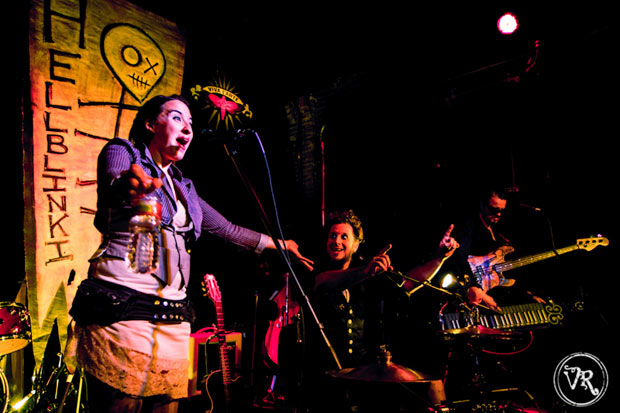 That said, when North Carolina swashbucklers Hellblinki preceded Professor Gall in what could be described as a semi-satirical mocking of a Dropkick Murphy-esque pirate waltz.  The main stay for this three-piece group owed a lot of its credit to Valerie’s Opera-influenced vocals.  Given that, “Wicked World”, a yo-ho-ho and a bottle of rum tune inadvertently poked fun at itself right 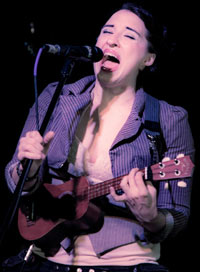 after its delivery.  All in good fun, though, as singer/guitarist Andrew strummed along with a pitch-perfect cool of which only sunglasses could adequately get across, apparently.

Still, what this three-piece lacked in authenticity, they made up for in tone.  It was the kind of atmosphere you might find at a Weird Al show but with much less wordplay.  At certain points the awkward bob-up-and-down structure seemed exhausted but the harmonies during that of “Breaking Everything”, shot a quick tempo shift of life into the mix.  Even then, there is no doubt that Hellblinki enjoys doing what they do and with zombies and plastic guns popping up during the set, it is safe to say the audience went with it.

This leads us to the night’s headliner, Professor Gall.  As the only set to fully engage its audience, this nostalgic Portland-based group delivered on both quality and energy.  The five-piece collective armed with a sax, trombone, standup bass, piano, and guitar had all the right elements for swing-like compositions, fluid yet suppressed jazz-tinted rhythm, and an easygoing folk backbone. 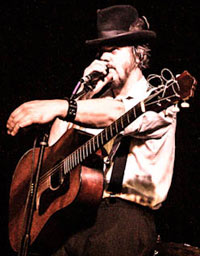 One would say more about this up-and-coming collective but was too busy dancing to put a microscope on Professor Gall.  But, that statement in and of itself says it all.  Anytime, Portlanders are dancing – something’s up.  With that, it is a shame that swing music is far and few between these days.  All the same, Portland is lucky it has Professor Gall to help us all get into the swing of things.

For pirate waltzes and zombie parades, catch Hellblinki as they wrap up their tour on the West coast: