Manchester Academy was buzzing with creativity on the 23rd of November.  The first band up, Foxy Shazam, created a fascinating arts performance.  Lead singer Eric Sean Nally had a huge presence as he flaunted his body and spasmodically contorted himself into unusual positions, along with mixing in a few balancing acts from the pipes on the ceiling.  At one point he was clinging to his trumpet player’s hairstyle whilst he gyrated his body, balanced on the trumpeter’s shoulders! 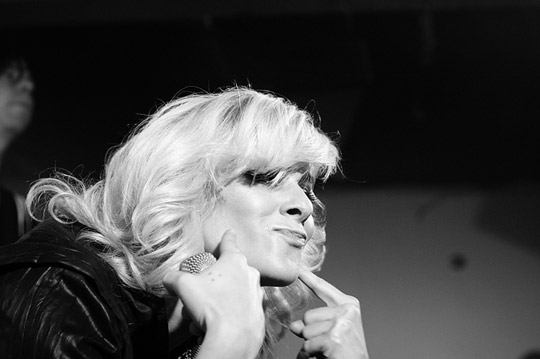 Click here for photos of Foxy Shazam at SXSW 2010 in Austin, TX in the QRO Concert Photo Gallery

Foxy Shazam were certainly a rare act; this American experimental rock band is must-see for intense music lovers.  As the performance progressed, Nally’s dramatic visual presence on stage increasingly could only be described as resembling a blend of acts such as Captain Beefheart with a dash of LSD, mixing in some Scissor Sisters.

Eric Sean Nally is a front man that certainly stands out above the rest.  He didn’t seem to hold anything back on stage.  The audience was lucky to capture this incredibly talented band in such a compact venue.  At intervals, Nally created a very captivating highly pitched voice, as he randomly told the crowd stories of how he lived in 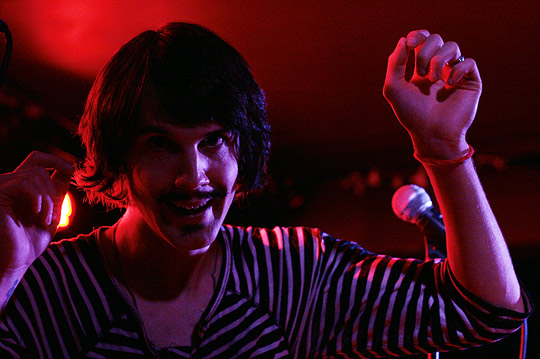 run-down areas.  He also pointed out on occasions that all he wanted for Christmas was love and a present!  Nally’s slender body frame complimented his outfit, which resembled a Pierrot clown doll.  This gave off a magical sense of an 18th century circus performer.  He plucked invisible feathers out of the air, dismantled the drum kit, and was in essence a very theatrical character, while Foxy Shazam filled the stage with interesting sounds.  Clearly a very talented band musically, they were unfortunately underappreciated as the audience capacity was still low at the time they played. 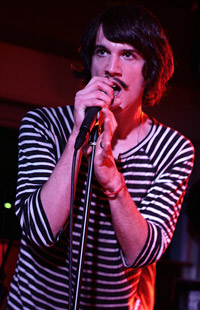 The second performance of the evening was Matt & Kim (QRO spotlight on), also known by many as Brooklyn’s king and queen of dance-punk.  Kim Schifino (QRO interview) was initially welcomed onto the stage, and unexpectedly began to shake her ass like Beyoncé Knowles, which got the crowd going.  Throughout the performance, synth sounds and interesting silences between beats filled the room.  Schifino’s beaming smile persisted through out as she hit hard at the symbols with delight.  “Daylight”, from this year’s Grand (QRO review), was a particular favorite. 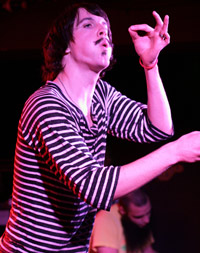 Click here for photos of The Sounds at 2011 Osheaga Music Festival in Montreal, PQ, Canada in the QRO Concert Photo Gallery 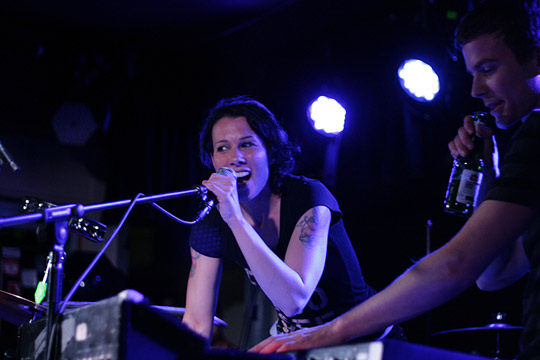 walk elegantly to the centre of the stage and unexpectedly spat towards the floor and lit a cigarette.  This caused a huge reaction, as smoking is banned in clubs in the U.K. – the crowd loved it, and after eagerly waiting for the band, this action instantaneously caused the audience to misbehave.  As Ivarsson was forced to put out the cigarette, she stated how she hated rules, and the crowd soon had to be calmed down by security.  However, The Sounds encouraged this disobedient behavior. 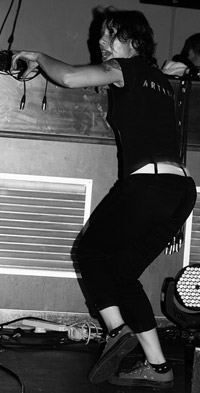 Click here for photos of The Sounds at Avalon in Los Angeles, CA on March 29th, 2011 in the QRO Concert Photo Gallery

Click here for photos of The Sounds at Roseland Ballroom in New York, NY on September 17th, 2009 in the QRO Concert Photo Gallery

Click here for photos of The Sounds at Santos Party House in New York, NY on April 30th, 2009 in the QRO Concert Photo Gallery

Throughout the evening, The Sounds played an eclectic blend of dominant nostalgic eighties disco pop/rock synth sounds.  After a mixed bag of tunes, it seemed that “Beatbox” was a particular favorite.  The Sounds gelled particularly well with the crowd that intimate evening.  An especially intimate song was “Night After Night”, as it was surprisingly different in style to the previous pieces that night.  As Ivarsson softly sang its emotive lyrics, the audience waved flames from their cigarette lighters and joined in as the gentle piano notes played softly in the background. 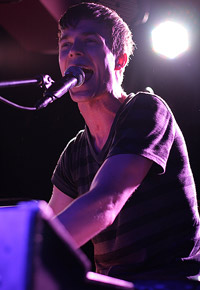