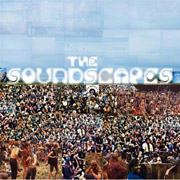 Brothers Raphael and Rodrigo Carvalho moved from their native São Paolo to Brooklyn in 2003, and their work as The Soundscapes certainly seems more Brooklynite than Brazilian.  The guitar-and-drums duo hews a high guitar press, reminiscent of the borough’s indietronica acts when they lay off the keyboards, or the neo-garage groups when they lay off the fuzz.  While their work on Freestyle Family doesn’t exactly vary much, it’s a sweet sound that the brothers Carvalho have down pat.

Differentiating, track-to-track, is something of a futile exercise on Freestyle, as The Soundscapes keep their high press from one piece into another, with vocals rarely memorable (save for the title line on “High Noon In the Nuclear Era”).  A couple of songs go a bit darker, like “Tides of Time” or “(We’re All Made of) Star Stuff”, while a few others simplify things by upping the catch, such as “Back To Life” and “She’s Gone”.  The closest thing to a stand out is “Son of the Future”, which keeps that catch without simplifying.

But as a piece of indie-background music, Freestyle Family is choice, never letting the listener down.  The Soundscapes may have only mastered one sound, but it’s a very nice one.

MP3 Stream: "Son of the Future"