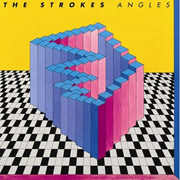 No one in twenty-first century alternative music has had the kind of rise & fall as that of The Strokes.  2001’s Is This It broke through so severely that it pretty much launched the alt-rock revival of this century/millennium, relaunching the New York music scene as a byproduct.  But then the two subsequent albums, 2003’s Room on Fire and 2006’s First Impressions of Earth, sounded like the exact same as what had come before – the modern example of a band making it big, then following up the success by carbon-copying what they’d done.  The backlash wasn’t so much hateful as it was that The Strokes became passé.  The inevitable long hiatus followed, and the various side projects and solo albums were even weaker (see singer Julian Casablancas’ Phrazes for the Young – QRO review).

But everything comes back around in indie circles these days, and the return times are getting smaller & smaller (at this point, are there any nineties bands who haven’t reunited?…), so there’s certainly a place for The Strokes to come back, and the hiatus has served them well.  While Angles could never be as refreshing as Is This It (could anything?), it’s still a welcome return.

The Strokes haven’t changed their style that much on Angles, but more so than in their last two records, and the long time away has made it not as commonplace (Is This It was ten years ago…).  There is a darker underbelly to the record, sometimes out in the open (staccato-dark "You’re So Right", pressing "Metabolism", ominous and distant "Life Is Simple In the Moonlight"), but it’s usually underneath the catchy Strokes, like on opener "Machu Picchu", and that’s where it works better, with only closer "Simple" a particularly accomplished stretch piece (the small and meandering "Call Me Back" is like an attempt at stripped Beatles, which the band is not skilled enough to pull off, though still has its moments).  And there’s still the up-stroke Strokes numbers like "Gratisfaction" or single "Under Cover of Darkness".

That up-Stroke sound on singles like "Hard To Explain" were what made The Strokes such a breath of fresh air, but that tons of other bands followed in their wake showed that The Strokes weren’t unique, merely first out of the gate.  It’ll never been 2001 again, and drummer Fabrizio Moretti long since broke up with Drew Barrymore (though hipsters in Brooklyn & the rest of the world are still dressing like The Strokes…), but there’s a place for The Strokes & Angles in today’s world.

MP3 Stream: "Under Cover of Darkness"