The Temper Trap : Live in Studio

The Temper Trap doubled-up and debuted new when they played a special show at PC Richard and Son Theatre. ...

Click here for photos of The Temper Trap two days later at House of Blues in Boston, MA in the QRO Concert Photo Gallery

Click here for photos of The Temper Trap at Music Hall of Williamsburg in Brooklyn, NY on March 29th, 2012 in the QRO Concert Photo Gallery

Click here for QRO’s review of The Temper Trap at Roseland Theater in Portland, OR on March 14th, 2010

Click here for photos of The Temper Trap at CMJ 2009 in New York, NY in the QRO Concert Photo Gallery

Whoa – where did The Temper Trap come from, and how did they get so big, so fast?  The answer to the former is Melbourne, Australia (though they also spent some time building a fanbase is the less off-the-beaten-track London), and the answer to the latter starts with their debut, Conditions (QRO review), and continues with their pulsing live show.  This has meant the band has gone all the way from playing too early in the day at FADER Fort for CMJ 2009 (QRO day recap) to headlining the likes of Terminal 5 (QRO venue review) and New Jersey’s big Wellmont Theatre, not to mention getting the Portland date earlier this year bumped up into a bigger venue (QRO live review), making their shows a little less intimate as everyone else joins the party.  But you could still get close on Monday, September 27th, at their taping for iheartradio.com at PC Richard and Son Theatre. 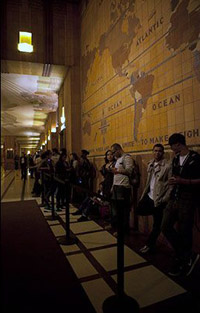 iHeartRadio is a website featuring streams of over 750 radio stations across the country, with extra content as well, including tapings at PC Richard and Son Theatre, a studio inside the AT&T Building near Canal & Broadway that is small enough that you can’t get a bad view point, 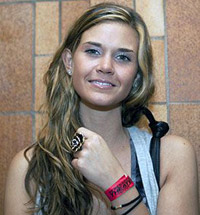 whether up front, mere feet from the band, or in the back, raised VIP area (QRO venue review).  However, the pulsating, bright lights, while fitting for the band and good for the taping, can be a little much if you’re close up, and the VIP area has free drinks (don’t forget to tip!).  Most shows there are for iHeartRadio contest winners & VIPs only, but the late-announced Temper Trap show saw iHeartRadio farm out their contests (including to QRO – QRO contest page) – and still had a massive line waiting inside the lobby of the AT&T Building.

All those who waited patiently in line got some bonus material – not that you’ll see it on iHeartRadio, because after the first few songs, the band stopped for a technical problems-induced intermission (assuring everyone that they would be back, akin to Stephen Malkmus telling everyone that Pavement would be back after having to stop due to threat of lightning the Wednesday prior at Central Park SummerStage – QRO photos), and it turned out

that something had gone wrong with the recording of everything they’d done so far.  The Temper Trap proceeded to play songs like recent single “Love Lost” for the second time (though “Lost” the epic instrumental intro to their set).  With only Conditions under their belt, The Temper Trap would have been stretched for material had they had to do no repeats, but pieces like “Love Lost” are good enough to hear twice. 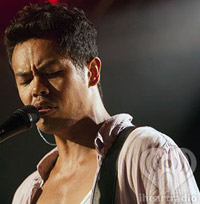 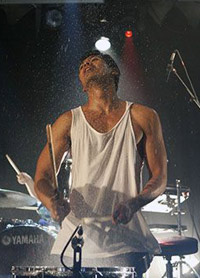 In addition to great singles like “Lost”, “Fader”, and the breakthrough first single “Sweet Disposition”, all of which you knew they were going to play, The Temper Trap also surprised with a cover of La Roux’s “In For the Kill” – something they had never done live, in front of an audience before.  The piece was stripped down, good for a taping but not necessarily in front of an audience – the PC Richard and Son crowd was quiet enough, but perhaps don’t do it at Wellmont Theatre on Thursday (QRO concert listing), Terminal 5 on Friday (QRO concert listing), or at Boston’s House of Blues tonight.  Singer/guitarist Dougy Mandagi carried the piece in the studio, after being a bit annoyed with sound people early in the set, and got some serious shock when he did the ‘water on the standing drum causes splash when beaten’ trick (swear his mother was in the crowd as well).  He also closed by singing “Science of Fear” from the photo pit, inches from the crowd. 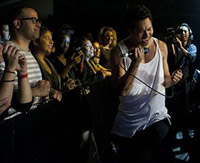 The Temper Trap share a U.S. label, Glassnote, with France’s Phoenix (who played PC Richard for iHeartRadio last December – QRO review), and some sort of comparison could be made between this young Melbourne-big Versailles connection and, say, that of the young Midnight Juggernauts (QRO spotlight on) from Melbourne & the band that brought them to the wider world’s attention, Versailles’ Justice – weirdly, all the big alternative French bands come from the Parisian suburb/former royal residence – is Melbourne doing the same down under?  But before they boys start on their “crucial second album” & worry about the ‘sophomore jinx’, catch ‘em live – even if you can’t find ‘em at as nice a place as PC Richard and Son Theatre.