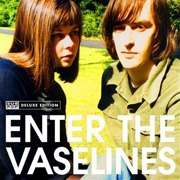 Few bands have had as much posthumous life, on such limited output while living, as The Vaselines.  The Glasgow outfit released only two EPs and one full-length in their four years, 1986-1990, breaking up right after Dum-Dum came out.  But then Kurt Cobain cited the group as his favorite songwriters ever, with Nirvana doing two covers of them on Incesticide and one on their acclaimed MTV Unplugged: Live In New York (QRO DVD review) – Cobain even named his daughter Frances after one-half of The Vaselines’ songwriting duo, Eugene Kelly & Frances McKee.  This all brought about Sub Pop’s 1992 The Way of The Vaselines: A Complete History, compiling all of the band’s released material – and there was another complete compilation that same year, All the Stuff and More….  Now, nearly two decades after they broke up, Kelly & McKee have returned for a short reunion tour, along with yet another complete compilation, Enter the Vaselines, which includes a second disc of demos & live recordings.

If you have The Way of The Vaselines or All the Stuff, disc one of the two-disc record won’t be much of a surprise, as it is the band’s two EPs and LP put together, and in chronological fashion.  However, The Vaselines still hold up well – very well, with the alt-garage-pop of such tracks as “Son of a Gun” (covered by Nirvana on Incesticide), “Dying For It”, “Teenage Superstars”, “Slushy” and “Dum-Dum” still as catchy and enjoyable as ever.  “You Think You’re a Man” is still eighties synth-funny, while “Oliver Twisted” and “The Day I Was a Horse” are still great alt-country-pop processions.  And their take on the traditional “Jesus Wants Me For a Sunbeam” is still touching – even if not as ultra-fine as Nirvana’s MTV Unplugged version (where they “do it The Vaselines way”).

There’s only one unreleased track on the first disc, and unfortunately “Bitch” isn’t very memorable.  The three demos that lead off disc two are unsurprisingly lo-fi, including the unreleased “Rosary Job” and “Red Poppy”.  The rest of disc two is made up of live tracks, first a rather poorly recorded show in Bristol (one can hear the audience talking in the background throughout), and then a better quality, but somewhat removed recording from London.  The Vaselines do drop a little humor, in charming Scottish brogue, including the serious matter of their drummer having “cancer of the drumsticks”, which came in between two back-to-back performances of the same song in the same set, “The Day I Was a Horse”.  And there was also the band’s ‘tribute to the seventies’, a cover of Gary Glitter’s “I Didn’t Know I Loved You (‘til I Saw You Rock ‘n’ Roll)”.

If you’ve already got either of the previous two complete compilations of The Vaselines, then no, you don’t need (to) Enter The Vaselines – just to go see them live while you can.  But for anyone who didn’t know that Kurt Cobain loved a short-lived, no-name alt-pop band from Scotland, it’s never too late to enjoy.