<img src="http://www.qromag.com/wp-content/uploads/2012/09/thevaselinesaug30.jpg" alt="The Vaselines : Live" />The Vaselines are worth seeing just for the between-song banter. ... 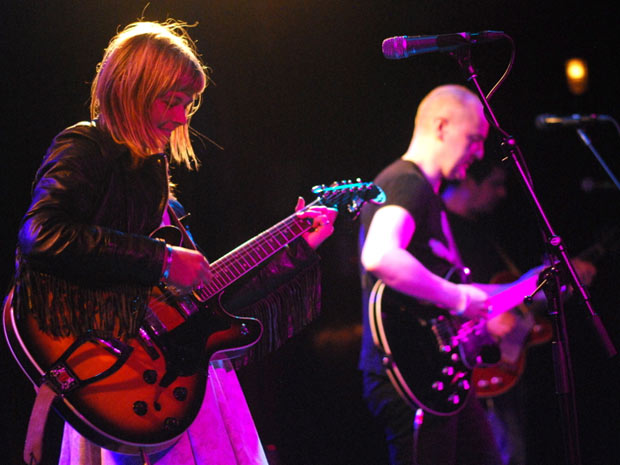 See enough shows of enough bands from enough places, and one learns that acts from the north of England or Scotland are invariably hilarious live, in their between-song banter.  There’s just something about living that far north, something about their accents, which just gives them the ability to make one laugh.  It doesn’t even matter what kind of music they play between the between-song banter, from hard rock to indie-pop.  But even among those funny northerners, Glasgow’s The Vaselines might just be the funniest.  Their show Thursday, August 30th at Brooklyn’s Bell House (QRO venue review) was worth catching just for the banter.

Click here for QRO’s review of The Vaselines at Music Hall of Williamsburg in Brooklyn, NY on May 18th, 2009

The original incarnation of The Vaselines, formed around singer/guitarists Eugene Kelly & Frances McKee, was a short-lived on in the late eighties, and would have been forgotten were it not for one high-profile super-fan – Kurt Cobain, who covered them on record (Incesticide) and live, including Nirvana’s famed MTV Unplugged session (QRO DVD review).  The group posthumously released a compilation of all of their material, The Way of The Vaselines, but were still broken up until 2008.  First came another posthumous release of prior material (with some live recordings), Enter The Vaselines (QRO review), and then 2010 saw their first new album in over two decades, Sex With an X (QRO review). 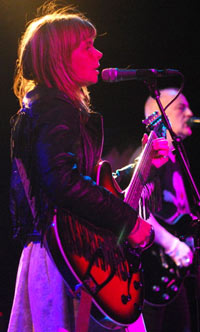 But the group’s sweet & catchy indie-pop belies their ultra-bawdy humor.  Kelly & McKee discussed Kelly’s “sparkly thong” (“I’ll get down to it just about time for ‘Jesus Wants Me For a Sunbeam’…”) and McKee being the “mystery blonde” in the scandalous nude photos of Prince Harry from Las Vegas (but beneath Kelly’s thong was “Prince William – I’m bald downstairs like Prince William…”).  There were the unusual (to say the least) items that McKee wanted to sell at the merch table: little bottles of (her own) urine, and “wankies” – piece of clothe for doing you-know-it (Kelly said a better name was “wankerchief”), “And I think even girls might find it useful…”  Kelly once even out-and-out said, “I’m waiting for you to say something smutty,” to which McKee mock replied, “I’m not that kind of girl…”

It wasn’t all dirty jokes.  McKee kept threatening to play “Dying For It (The Blues)”, the slow version of “Dying For It”, but Kelly wouldn’t have it – and when not enough people clapped in response to her asking if the crowd wanted to hear it, she replied, “Well that’s not fuckin’ enough now, is it, so you’re not hearing it!”  Kelly also said,

I thought we had a new album out, but actually it’s been out for two years.  Doesn’t time fly when you’re doing nothing?…

So this is a song from our old new album… 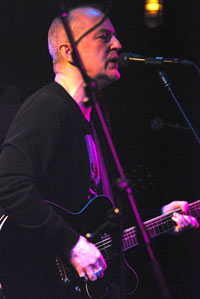 Oh, yeah, there was also some great music.  Naturally, the twenty-plus-year-old songs (or ‘old old songs’) are the most loved, and The Vaselines played every track from Enter The Vaselines save for “Dying For It (The Blues)”, or course (though did play the original, not-slow version), and, more unfortunately, “Teenage Superstars”.  The indie-pop from evening opener “Sex Sux (Amen)” to closer cover of Divine’s “You Think You’re a Man” all worked just as well as they did in the last century/millennium, and even the segue from talking about the wankerchief to “And now a song about Jesus…” couldn’t mar “Jesus Wants Me For a Sunbeam”.  And while the “old new” songs from Sex With an X couldn’t quite match, there were some really nice ones, such as the title track and the always-welcome “I Hate the ‘80s”.

Over in the States for only a few dates (including L.A. FYF Fest that weekend – QRO preview), Kelly & McKee were as charming as ever.  Hopefully a bigger tour (and maybe a ‘new new album’) are coming soon – but don’t talk to your friends between their songs, as not only will they call you out on it (“This is just like playing Glasgow – nobody listens.  Fuck, Eugene, you didn’t listen…”), but you’ll miss some of the funniest between-song banter on either side of Hadrian’s Wall.

The Vaselines covering Divine’s “You Think You’re a Man” live at Bell House in Brooklyn, NY on August 30th, 2012: