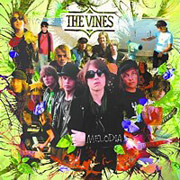 In this decade/century/millennium, Sydney’s The Vines have had a story more fitting to a seventies U.K. rock band: unknown in their native Australia, they first blew up in England off the back of single “Highly Evolved” in 2002, shopped around until a major label (Capitol) gave them a deal for a full album (of the same name), which made the charts even in America, became the first Aussie band to grace the cover of Rolling Stone since Men At Work in 1983, and, along with fellow ‘The’ bands like The Strokes, The Hives, and The White Stripes (QRO live review), were called the ‘saviors of rock’.  That’s the rise.  Follow-up LP Winning Days didn’t match Highly Evolved’s critical or commercial success, and lead singer/guitarist Craig Nicholls’ increasingly erratic behavior (including smashing his equipment in a Tonight Show with Jay Leno soundcheck, getting them kicked off the show before even appearing on it) led to a blow up with fans and founding bassist Patrick Matthews, who literally walked off stage rather than deal with Nicholls anymore.  Nicholls’ diagnosis of Asperger’s Syndrome, and The Vines getting dropped from Capitol after 2006’s Vision Valley, seemed like the epilogue, after the fall.  But the band signed a looser contract with Ivy League while Nicholls learned to better handle his Asperger’s, and now comes Melodia, a record that hews pretty much to the same messy garage-rock sound that The Vines have always done, but feels better without the baggage.

The Vines made their name with fun, forward-rocking singles like “Highly Evolved”, “Get Free”, and “Ride”, and Melodia has that right at the start with “Get Out”, a track that’s unmistakable The Vines (if a bit too close to Evolved singles “Get Free” and “Outtathaway!”).  Other early songs like “Manger” and the funny “He’s a Rocker” stick to that well, though the wild parts on “Braindead” are too sloppy and loud.  The Vines’ past slower material hasn’t been as memorable, and that’s the case on Melodia as well, such as with the overwrought “True As the Night”, or the waiting-to-explode-but-never-does “Kara Jayne”, with only “Orange Amber” adding some catch to its sway.

However, in Melodia’s final third, The Vines really make an attempt to marry those two strains (aside from the run-of-the-mill loud Vines, with the run-of-the-mill title, “Hey”).  While the stark road-press bass beneath wild Vines “Scream” doesn’t quite come together, “MerryGoRound” has a nice mix of guitar-wry sway and all-out rock.  And “A Girl I Knew” & “She Is Gone” develop their swaying sound more, “Girl” sort of a ‘sad outdoors Beatles”, finisher “Gone” more Beach Boys-meets-Vines.

Yet even with these, Melodia is mostly a record that’s in the same vein as the past three Vines albums.  But whereas Winning Days and Vision Valley were disappointments after Highly Evolved and the unrealistic expectations generated, Melodia feels like a nice throwback to a simpler era in indie-rock.  If The Vines didn’t stay huge like The White Stripes, they also didn’t terribly drop off like The Strokes, but just kept doing their thing like The Hives, albeit as far wilder Aussies than those staid Swedes.