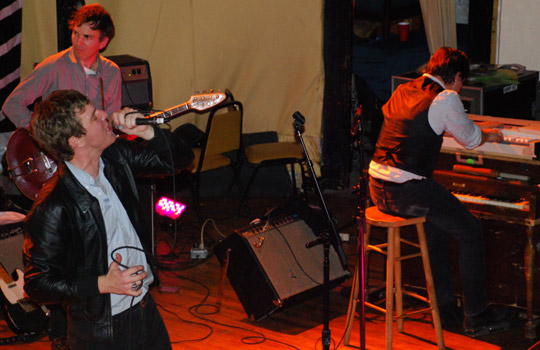 Click here for photos of The Walkmen at Pitchfork Festival in Chicago, IL on July 19th, 2009 in the QRO Concert Photo Gallery

Click here for photos of The Walkmen at Webster Hall in New York, NY on March 4th, 2008 in the QRO Concert Photo Gallery

Click here for photos of The Walkmen at Music Hall in Williamsburg in Brooklyn, NY on September 14th, 2007 in the QRO Concert Photo Gallery

Click here for photos of The Walkmen at Bowery Ballroom in New York, NY on March 8th, 2007 in the QRO Concert Photo Gallery

The Walkmen seem to be finally becoming comfortable with their status as pseudo-‘elder statesmen’ of Brooklyn’s twenty-first century indie rock scene.  The five men burst out of the Big Apple in 2002 thanks to Everyone Who Pretended to Like Me is Gone, and followed that up two years later with the excellent Bows + Arrows, a staple of many 2004 Top Ten lists.  Their indie-saloon-style barroom rock seemed to succeed faster than the band knew how to deal with it, and they veered from shedding their drunken stage personas for coats & ties to releasing a start-to-finish cover of Harry Nilsson and John Lennon’s boozy weekend project, Pussy Cats (QRO review).  Yet the fall release of their latest, You & Me (QRO review), has seen the band more at home, willing to embrace their sadder ways.  The Walkmen were certainly at home at home, as they closed out 2008 at the Brooklyn Masonic Temple on Thursday, December 16th.

Breaking with the past couple of years, The Walkmen weren’t in suit and tie, and that was just the first inclination of their ease that evening.  Masonic Temple (QRO venue review) was more packed than it has possibly ever been, even more so than Dan Deacon’s fourteen-man ensemble debut the week prior (QRO live review) or Broken Social Scene’s big CMJ show there (QRO CMJ Day Four coverage) (and both of those had been big enough to be covered by The New York Times…).  Even from opener The Dodos (QRO photos), fans were lined wall-to-wall, from merch table on the far house-left to beer ticket table on the far house-right (and those folks weren’t letting anyone walk behind them), making the badges to get into the balcony even more important.  But it all rolled of The Walkmen’s back, as they played whatever they wanted. 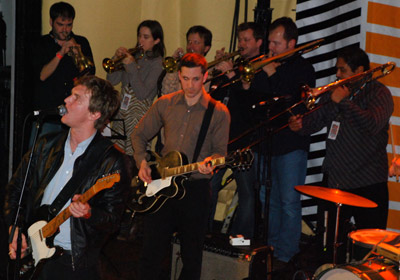 Of course, that was mainly tracks from their latest, which comprised over half the set list, starting with You & Me’s starter, “Dónde está la Playa”, whose interesting echo-remove played even more haunting in the wide Temple.  The Walkmen then hit up their most recent song for the holidays, “In the New Year”, whose rises & crashes were amped up.  The horn section came out for the older “Louisiana” (the single off of 2006’s A Hundred Miles Off), with singer/guitarist Hamilton Leithauser thanking their brass folks, especially whomever it was he called their leader.  But then it was back to You & Me’s sadder, more stripped fare in “New County” and “I Lost You”. 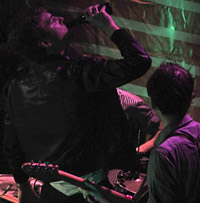 Even as they stripped those tracks down further, The Walkmen were also more relaxed, something they kept up through Hundred’s “Good For You’s Good For Me”, before warming up the cold night with a paradoxically tropical take on You & Me’s “Canadian Girl”.  The band was still able to step away from the present day for two classics, “They’re Winning” and “The Rat”, the only two numbers played off of either Everybody or Bows (respectively).  Breakthrough single “The Rat” seemed even more electric, after such slow & new songs, with even the seated balcony rocking.

The Walkmen playing “The Rat” live at Brooklyn Masonic Temple in Brooklyn, NY on December 16th, 2008:

But The Walkmen didn’t feel beholden to their older material, despite the fact that many in the crowd had been following these local heroes for a longly-long time.  Leithauser’s vocals and the horns section came to fore on You & Me’s “Red Moon”, while the laid-back soft/loud elements of “Postcards from Tiny Islands” grew even more so.  While the audience undoubtedly went craziest for louder, less recent material like Hundred’s “All Hands and the Cook”, The Walkmen still went into the encore break with the soft and sad You & Me tracks “Long Time Ahead of Us” and “On the Water”.

The Walkmen playing “On the Water” live at Brooklyn Masonic Temple in Brooklyn, NY on December 16th, 2008:

But the biggest curveball had to be their encore return choice.  You’d think, this close to Santa’s big day, the band would have to play Bows + Arrows’s “No Christmas While I’m Talking”; instead, they hit up a slightly different Christmas carol: Irving Berlin & Bing Crosby’s “White Christmas”.  Yes, it was a joke (though outside, New York’s first flakes were falling), but still sounded sweet.  The Walkmen then ended 2008 on a weary, but still altogether bright note with Hundred’s “Another One Goes By”.

The Walkmen playing “Another One Goes By” live at Brooklyn Masonic Temple in Brooklyn, NY on December 16th, 2008: 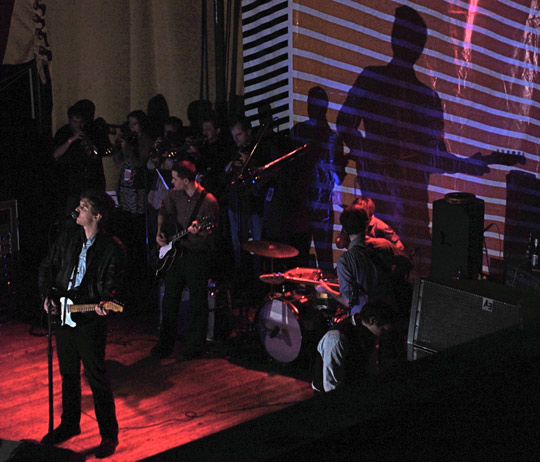