<img src="http://www.qromag.com/wp-content/uploads/2012/07/thewalkmenheaven180.png" alt="The Walkmen : Heaven" style="float: right; margin: 5px" />After a decade of uncompromising their sharp sound, The Walkmen have perfectly rounded it out. ... 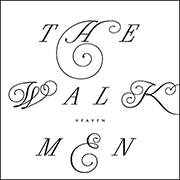 Since their 2002 debut, Everyone Who Pretended To Like Me Is Gone, The Walkmen have remained true to their raw, signature throwback sound.  Seemingly unwilling to give into many production effects at all, the group has tested the limits of their chamber-garage appeal, and on their latest release, Heaven, they combine that edginess with a batch of their most pop-perfect melodies of their careers.

The album begins with its most stirring moment, the folky ballad “We Can’t Be Beat” that ramps up from Hamilton Leithauser’s melancholy serenade – backed by an acoustic pluck and soft backing harmony – into a pounding romp highlighted by Leithauser’s powerful post-yodel vocals.  It’s not only a bold statement but also something of a wink/nod that it’s all in the wrist for the group who’s been refining their sound for over ten years.  From there, Heaven, evolves directly into a guitar-pop masterpiece with “Love Is Luck” and the thumping, charged “Heartbreaker” that hints at the fevered guitar riffs of their 2004 hit, “The Rat”.

In the remainder of the album’s thirteen tracks, the mood ebbs and flows with grace.  At its’ most quiet (“Southern Heart”), Heaven enchants with delicate acoustic-led crooning and excites at perhaps its’ most grooved-in moment, the uptempo gem, “Heaven”.  The guitar-driven energy rises and falls on the other tracks while Leithauser’s powerful vocals remain constant as if half the tracks were conceived around campfire and others at a cookout.

Heaven might just be the best effort of the band’s history as they expand the softer side of their unmistakably rough sound while seeming to remain on the same page on every beat.  Each track sounds like it’s been a decade in the making, and the album is a glorious reward for those following the band for any amount of time.