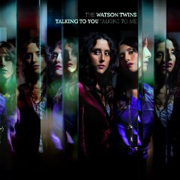 When L.A.-by-way-of-Louisville Watson Twins debuted in 2006, they were as the back up to Rilo Kiley (QRO album review) singer/guitarist Jenny Lewis (QRO live review) on her solo debut, Rabbit Fur Coat, even though the pair also put out their Southern Manners EP at virtually the exact same time.  Since then, (actual identical twin) sisters Chandra & Leigh Watson have been making their own name, but stayed in the same alt-country/folk harmonies with 2008 debut full-length, Fire Songs.  On follow-up Talking To You Talking To Me, they add a slow groove, wa-wa croon.

At first, the addition is rather unrewarding.  After the interesting alt-harmony press of opener "Modern Man", stop-start funk is ill married to grander styles on "Harpeth River".  However, the slow-groove, wa-wa croon works finer on subsequent "Forever Me" and "Midnight", as well as later piece "Calling Out".  Still, The Watson Twins are best when they stick to their alt-country melodies, whether the laid-back country-sly "Devil In You", or the grander, pop-country haunt before it, "Brave One".  The Francophile sixties girl-croon "Tell Me Why" has a nice swing, but feels a little too precious.

On Talking To You Talking To Me, The Watson Twins make an enjoyable, if not terribly overwhelming album, mixing pop-country harmonies and some slower grooves.  Not enough to take them out of the shadow of Ms. Lewis, but enough to keep people Talking.