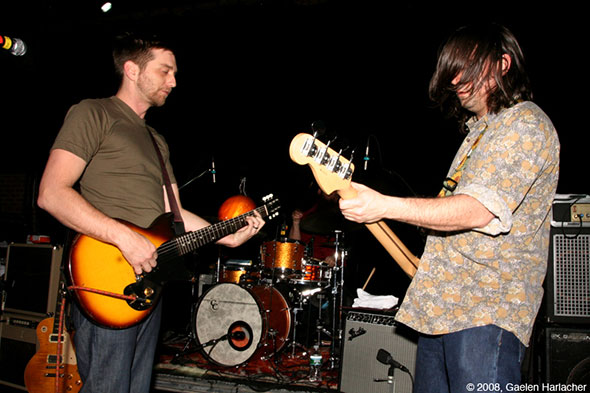 Click here for photos of Rah Rah at Bluebird in Bloomington, IN on March 4th, 2013 in the QRO Concert Photo Gallery

Click here for QRO’s review of Rah Rah at The Market in Fredericton, NB, Canada on November 3rd, 2010

First up at Brooklyn’s Music Hall of Williamsburg (QRO venue review) on Friday, December 9th was Rah Rah from Saskatchewan, Canada (a fact that it seems they particularly wanted the audience to be aware of), and they definitely had a charm to them.  The band featured a plaid-cladding frontman whose mumbled voice and very calm demeanor seemed to purposely contrast with the fun energetic performance of his bandmates, who played almost no songs utilizing the same instruments.  Every piece marked a changeover: the drummer would pick up the bass, the keyboardist moved over to the guitar, the violin player now holding an accordion, etc.  But the mixture of their sunny, poppy indie-folk, energetic live performance, and clever songwriting really kept the audience’s attention throughout the set.  And for the finale, the set culminated in six large silver balloons being thrown out into the crowd spelling out the words “Rah Rah” with a very climactic plume of confetti.  Which tied a nice bow on a really solid set.

Click here for photos of The Weakerthans at 2013 Riot Fest Toronto in Toronto, ON, Canada in the QRO Concert Photo Gallery

Click here for photos of The Weakerthans at Brooklyn Hall of Music in Brooklyn, NY on April 11th, 2008 in the QRO Concert Photo Gallery

The Weakerthans were on next.  There’s something so charming and haphazard and simple about their music, but there’s also something so precise and so perfect in it.  The same goes for their live shows.  On the one hand you have a straightforward performance, the Reconstruction Site night.  So you knew what they were going to play: the whole album front to back, and some of what they called, “fan favorites” (which any Weakerthans fan could have probably guessed with a near perfect accuracy).  But on the other hand, you had a really amazing show that was again, equal parts emotional, inspired, and full of little human moments of the band talking to each other and the crowd and looking like after all of this time it was still the most fun they could have, as it was picture perfect, really technically proficient and professional.  Even knowing the set list in entirety walking into the show didn’t change a moment of a great live show.