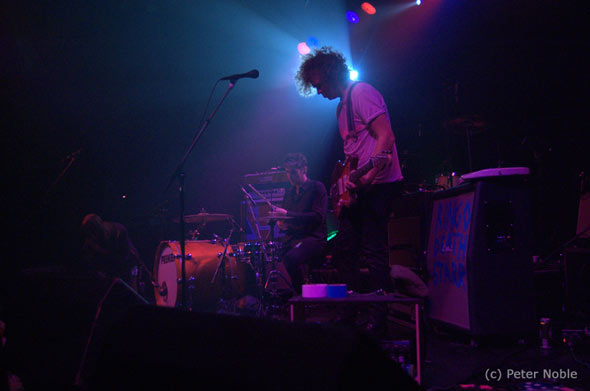 Ringo Deathstarr arrived on stage at O2 Academy in Bristol, U.K. to warm up the early arrivals that had come to reminisce over their youth on Sunday, November 21st.  They were here to remember the time when The Wedding Present (TWP) released the album Bizarro to RCA Records.  Tonight TWP were to play this classic album in full. 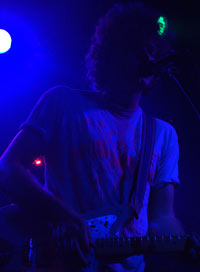 The band consist of Elliott Frazier, who was decked out in a white t-shirt with pink flamingos and wild hair that even Jim Reed from Jesus and Mary Chain (JAMC) would have struggled to beat.  The JAMC connection didn’t end there, as afterwards Frazier informed me that one of the guitars used tonight had once belonged to the Scottish statesmen of shoegaze.  Alex Gehring is the tall slender bassist whose fringe fell over her eyes holding a perfect rhythm section alongside Daniel Coborn on drums, who spent the evening beating the skins with menace.

Unfortunately the poor sound quality that is sometimes present within the O2 Academy was again present, or certainly there appeared to be an issue unfortunately with Frazier’s mike not being loud enough.

The Texans kicked things off with “Tambo Girl”, before heading into “Imagine Hearts” with Gehring taking on lead vocals embraced by Frazier’s swirling guitars and Coburn’s hypnotic beats.  Next up was “Sweet Girl” with Frazier taking the lead before again leading us into “So High”, which the guitarist/vocalist shared was now available on their MySpace page.  He suggested that the audience might want to take mushrooms or whatever they could get our hands on to take this song in.  This probably only reinforced even further to the ageing audience of mainly 40+ year old blokes that their youth had well and truly gone.  It had been hard enough for them to get a pass out to a gig, let alone take some hallucinogenic fungi, it would take these chaps a couple of days to get over the two pints they had consumed that night.

“Some Kind of Sad” swept people along with a punk at the front with a red mohawk starting to ‘headbang’ and caused a ripple effect around him.  Next came “Summertime”, which was released in September 2009 as part of a double sided 7″ single and is still available (http://www.svcrecords.co.uk); a beautiful song and elegantly dispatched by Gehring’s haunting vocals.  The set was over all too soon and Deathstarr finished with “In Love” with Gehring pounding her bass and backing with her vocals.

A band well worth seeing live and hunting out some of their tracks.  Hopefully all the following tracks will appear on the bands pending full length pending debut album Colour Trip, which is set for release on Valentines Day 2011 on Club AC30 Records with whom the band have just signed a record deal.  One of the tracks from this album, “Imagine Hearts”, is available to download for free on rcrdlbl.com.  Current and future tour dates and news available on MySpace and Facebook. 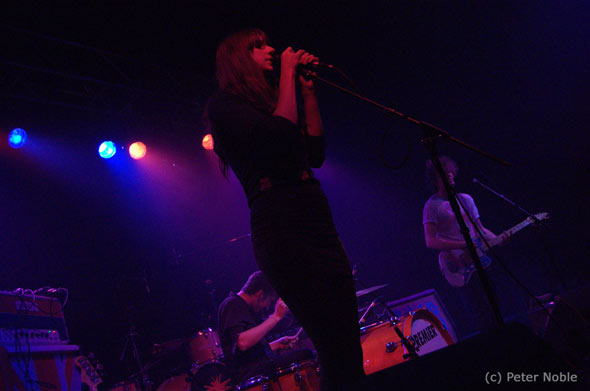 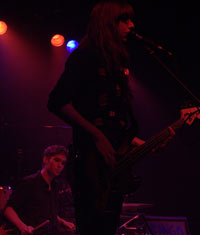 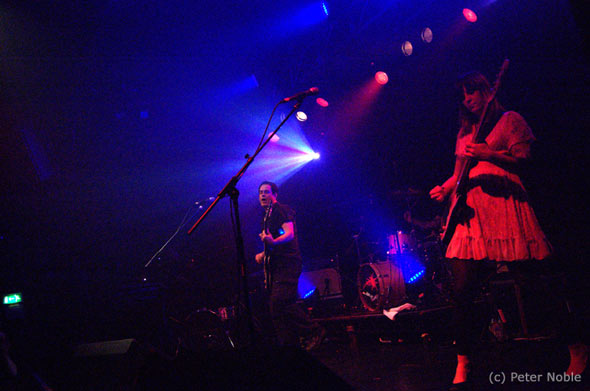 Click here for photos of The Wedding Present at SXSW 2012 in Austin, TX in the QRO Concert Photo Gallery

Click here for QRO’s review of The Wedding Present playing Bizarro in its entirety at South Street Seaport in New York, NY on August 13th, 2010

Everyone present in the audience back in 1989 had probably held that follow-up album to The Wedding Present’s George Best, Bizarro with its army green cover and topped off with an orange splat in the corner.  The album was also the first under a major label in RCA after following the band somewhat outgrowing their independent status under Reception with the George Best and Tommy albums.  The prince of indie ‘smooth distorted guitar sounds, being played at 200 mph’ took to the stage to a noisy welcome.  David Gedge, front man of The Wedding Present, dressed in black.

It was to be a track from the album Seamonsters, which came some two years after Bizarro, that opened the set.  “Heather”, a song that begins sweet and pleasant enough with a steady build up of acoustic guitar, but by the end Gedge had led the song into a distorted and contorted rant as he strains out the words, “But what made you want to take him there? / What made you think I wouldn’t care? / And did you walk from the town into the heather / To where we used to lie down when we were together.”  It was the first of many tracks that would unpick the complexities of relationships the pain, hurt, and sometimes joy, but mainly the anguish.

A pleasant surprise came in the shape of “Once More”, a track released in the U.K. in 1986 and appeared on the Tommy compilation of tracks.  This is the beauty of TWP, each time you go to see one of their gigs, there are so many diamonds to now choose from, and a sound that is still so relevant today.  Next, “Go Man Go” from the Mini Album. 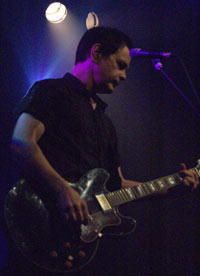 Someone in the audience called out for Seamonsters, just three songs into the set.  Gedge responded by reminding them that they had already played one track from the album.  Maybe the next tour will offer the Seamonsters album in full?  Instead the band launched into “Skin Diving” from Saturnalia, with Pepe le Moko new bassist from Switzerland stepping in for regular bass player Terry de Castro who had returned to the U.S., to concentrate on a second solo album.

A new WP song “You Jane” was offered up to the audience, which was met by groans!  In true Gedge fashion, the frontman offered an apologetic quip and offered a trip to the bar as a possible use of their time.  Furthermore, Mr. Gedge went on to say that they had never played the song before, well at least never in Bristol. 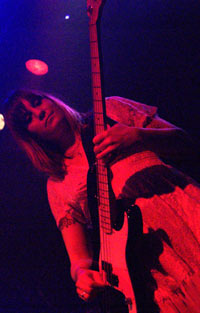 The Wedding Present have always been famed for giving time to their audiences.  In the early days the band used to release bootleg recordings of live gigs and a homemade fanzine called Invasion of the Wedding Present.  Tonight was no exception as Gedge gave opportunities for intellectual dialogue and questions from the audience.

Sadly, this is Bristol, and this appeared to be problematic, with the added issue of a dialect, which is hard enough to understand or translate, and in a town where too much cider is consumed.  David Gedge must have been kicking himself as one particular chap within the audience rambled on in his own small but simple little world.  To which Mr Gedge with his swift wit asked, “Have we got any security in here?”  The man continued in his own West Country tongue with his voice croaking away.  “Sounds like your losing your voice then?  Thankfully…” replied Gedge.

“Can You Keep a Secret?” was the penultimate part of the set before leading into the Bizarro album.  The intro of the song was extended as Gedge changed guitars.  As the song came to an end we were treated to samples of John Peel voice that proudly proclaimed to his listeners the arrival of “Brassneck”. 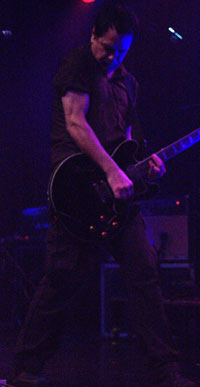 Bedlam ensued as the small mosh pit became a seeming mass of people of various sizes and hair loss leaping around as they did in 1989.  Gedge joined in this frenzy with string after string (as they used to in the old days) broke time and time again under the unnatural expectations and speed at which The Wedding Present songs take off.

The Wedding Present moved into calmer waters with “No”; this gave the audience further time to ponder that they were getting older, but The Wedding Present appeared to be getting younger and even more elegant.  No sooner had this finished than we were off and away again at frenetic pace with “Thanks”.  A St John’s ambulance waited by the mosh, but yet the pace kept going, as did David Gedge’s strings.  At the end of the song another chatty soul from the Bristol audience referred to the number of broken strings, to which Gedge proclaimed, “That my friends is the power of rock ‘n’ roll!”

An air of anticipation grew around the venue as people awaited probably one of the best-known WP songs.  “This is a song named after a former American President…  This is Eisenhower!”, proclaimed Gedge.  The venue bounced up and down to the jangles of “Kennedy” with the mosh singing along to the chorus, “Lost your love of life / Too much apple pie / Oh have you lost your love of life?” as Gedge took a well earned rest midway.

The night had reached the end of the side A with “What Have I Said Now?”.  This track had been given a very smooth makeover and wax that left this old number polished up like a well-loved collectors car.  The song was reinvigorated and perfectly driven by the band and with Gedge clearly fully immersed in the song, as was the audience.  A piece of hurt and the broken relationships that many present could probably relate to.  At the end of the song Gedge confirmed what the audience had felt, “Intense that!”

The moment was soon shattered by another quip from the punter in the audience who yelled for “Shatner”, to which he was reminded by Gedge was on a different record and not Bizarro.  David gave out a plea to the audience to follow him on Twitter and proclaimed his wish to have a million followers by the end of the year.  He furthermore said, “I know this sounds like a cry for help, but everyone needs to be loved!”  On cue our chap in the audience seized his moment and shouted, “I will love you if you play “Shatner”!!”, to which David Gedge proclaimed he wasn’t about to drop that low.

“Granadaland” pounded away and so did the energetic moshing and its numbers were swelling.  This really was turning into something that wasn’t forcefully trying to bring back the audience’s youth, the audience and the band were freely enjoying the moment for what it was and the music still sounded great.

Only two songs left after this next one announced Gedge, but with one of those tracks being nine minutes long, there was still some time to go.  Granted a short interlude for a band like This Will Destroy Us or Godspeed You! Black Emperor, but really quite a novelty for a post-punk band who hailed originally from Leeds.  “Bewitched” built quietly and steady before dying off.  After the brief silence, it pound back in but might have been executed slightly better.

The time had arrived for “Take Me!”, to which Gedge said, “I’ll see you in about nine minutes,” and the whole of The Bristol Academy shook as people leapt with glee to this nine minute glorious number with it’s rock ‘n’ roll riffs.

The last song of the night had arrived (The Wedding Present have never done encores; never have, never will).  Gedge said he would see everyone back in Bristol soon, to which you know who yelled “When!?”  “Give us a break,” Gedge replied, “We’re here now aren’t we?  We were The Wedding Present,” and The Weddoes finished with the almost jazzy acoustic number “Be Honest”, which enabled the 40+ year oldie’s to prepare themselves for the journey home through the bitter cold until the next time. 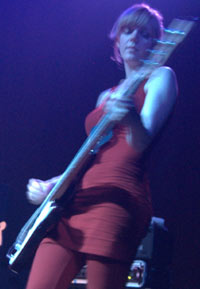 Heather
Once More
Go Man Go
Skin Diving
You Jane (New Song)
Cheers
Can You Keep A Secret?
Brassneck
Crushed
No
Thanks
Kennedy
What Have I Said Now?
Granadaland
Bewitched
Take Me!
Be Honest 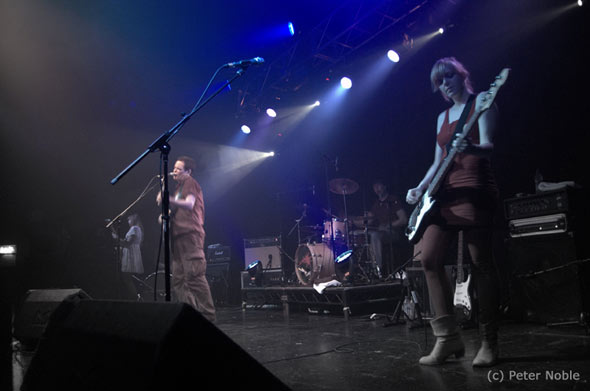