The Wilderness of Manitoba : When You Left the Fire

<img src="http://www.qromag.com/wp-content/uploads/2010/07/thewildernessofmanitoba.jpg" alt=" " />Despite their relative inexperience as a collective, The Wilderness of Manitoba toil in a sound arguably as lush as their namesake. ... 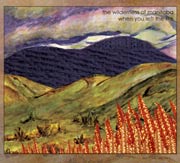 When You Left the Fire marks the first full length release from Ontario’s The Wilderness of Manitoba, and despite their relative inexperience as a collective, this group of Canadian musicians toil in a sound arguably as lush as their namesake.

Though the band traces its roots to a common folk background, they project much more than the musings of simply another generic folk band.  In fact, folk seems almost too sparse a word to categorize the group’s verdant soundscape.  Instead of dwelling in such a broad-yet-constrictive genre, The Wilderness of Manitoba take a note from the ambient pop sound that’s so well done in their homeland, and apply it to their own mix of brilliantly atmospheric alt-folk.

There is somewhat of a fantastical nature at the heart of When You Left the Fire.  Whether it be the eerie guitars and ethereal vocals the band so excels at, or perhaps even the oddly serene feeling that goes along with them, but whatever it is gives rise to a sense of euphoric wonder.  Standouts "November" and "Hermit" illustrate that, despite some darker musical segues, serenity and ease are the undeniable strength of the album.  Meanwhile, harmonies seam in and out of "White Water" with a fervent desperation that only adds to the album’s deep layering.  From there, the band eases into a few less distinct numbers, before finishing off on mellow instrumental "Reveries En Couleurs".

When You Left the Fire sees the melding of a layered folk output, with a tinge of pop sensibility.  Essentially a mix of the style that spawned Fleet Foxes (QRO album review) and Midlake (QRO album review), with the accessible sound of names like Grand Archives (QRO live review) and Band of Horses (QRO live review), the band’s music is intriguing as it is invigorating.  Though the album runs a bit long, and can be a tad indulgent, it truly is one of the best folk albums to come out of the great white north in 2010, and perhaps even longer.  Though it may not have wooed this years Polaris Prize Panel, the childlike marvel surrounding When You Left the Fire just may captivate you if you let it.