The Wombats brought their frantic act to Portland, and all sorts of craziness happened in the course of an hour and twenty minutes. ... 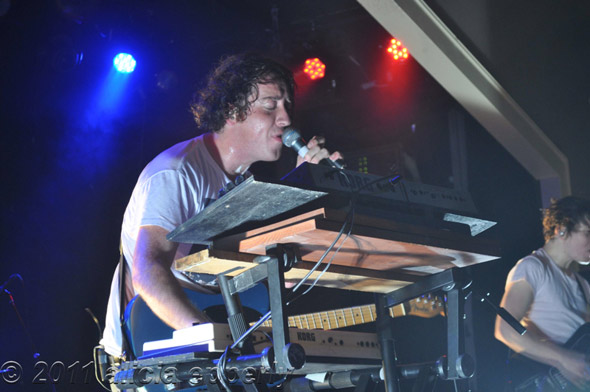 Click here for photos of The Wombats at Bowery Ballroom in New York, NY on May 31st, 2011 in the QRO Concert Photo Gallery

The Wombats brought their frantic act to Portland’s Wonder Ballroom on November 10th, and all sorts of craziness happened in the course of an hour and twenty minutes.  Touring in support of their new album This Modern Glitch (QRO review), Matthew ‘Murph’ Murphy (lead vocals, guitar), Tord Øverland-Knudsen (bass, guitar, keyboard, backing vocals) and Dan Haggis (drums, percussion, keyboard, backing vocals) made this a night to remember.  Right from the start of opening number “Perfect Disease”, the crowd was singing and bouncing along.  For whatever reason, the 780-capacity room was maybe half full, but you’d never have known that from the band’s performance and the audience’s adulation.

Songs from both the new release and 2007’s A Guide to Love, Loss & Desperation were energetically received.  By the second song, “Kill the Director”, the crowd was already shouting out “This is no Bridget Jones” repeatedly.  The band sprinkled quips, stories, and even a foot race between songs, which made the show even more memorable.  After “Kill the Director”, Murphy noted that. “We went head-to-head with Portland last night and I think Portland came out on top.”  They had a bit of a weird evening where somehow they also befriended a pimp and Occupy protesters.  After playing “Jump Into the Fog”, Murphy announced that it was a song about falling in love with a prostitute and that the next song (“Patricia the Stripper”) was also about falling in love with a prostitute.  He continually had people in stitches.  “Techno Fan” was dedicated as a birthday song to an attendee before the band ripped through a knockout rendition. 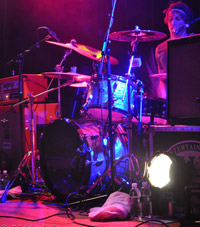 “Moving To New York” was given an extended intro and outro, stretching the song to over six minutes.  And as the band sang, “Christmas came early,” the crowd felt the same way on this mid-September night.  The Wombats played like this was a gift to all who showed up.  Screams broke out from the first note of “Tokyo (Vampires and Wolves)” and it was apparent that this song should be ruling on the radio.  For the final song of the night, the band played an eight-minute version of “Let’s Dance To Joy Division” that had everyone dancing.  This culminated in a foot race between Murphy and Øverland-Knudsen as Haggis kept the beat.  They ran through the crowd, across the main floor and up the stairs to the balcony.  And with a touch of the back window and a run (and stumble from Øverland-Knudsen) down the stairs, they ended back on the stage to finish off the song.  Though Murphy was first, there was no loser, only winners.  Even if The Wombats lost in their head-to-head with Portland the night before, they definitely won tonight.  And because of all this, the Portland crowd also came out on top. 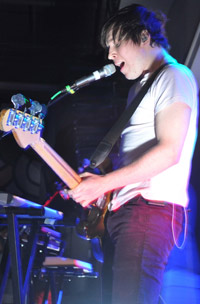