The Wombats : This Modern Glitch

<img src="http://www.qromag.com/wp-content/uploads/2011/05/thewombatsthismodern.jpg" alt="The Wombats : This Modern Glitch" />I never knew I was a Wombats fan. ... 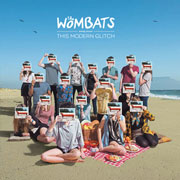 Americans have had to deal with a lot of bad emo electro.  For every Passion Pit (QRO album review), there are million wanna-be Passion Pits (certainly were a lot at South by Southwest this year – QRO recap).  And combining popular electronic music + popular rock has produced a lot electro-rock.  So when a sound has seemingly be thoroughly ruined by success, where is a Yank to look?  Why England, of course, and out of not just England but Liverpool, in fact, come The Wombats, who sophomore This Modern Glitch has the kind of infectious electro-rock that even makes emo good.

Not every track on Glitch is pitch-perfect, but those that are, really are – namely "Tokyo (Vampires and Wolves)" and "Techno Fan", whose choruses are so great even the biggest hater can’t help but sing along.  And Glitch near-consistently makes emo-electro work, from the pushing opener "Our Perfect Disease" through the strings maudlin "Anti-D" and Anglo-synth "1996", ending with a kind of Wombats anthem in "Girls/Fast Cars" and swinging, swaying Wombats of "Schumacher the Champagne".  There are some lesser songs on the record, but they’re still decent & forgettable, not bad & cringe-worthy.

If The Wombats are too English for serious success in America, that’s really too bad, as they’re light years ahead of American bands trying to do the same thing (Wombats have charted in Australia, but they are named after the native fauna Down Under…).  Or maybe it’s good, because then we’ll have to deal with a million wanna-be Wombats, which could even take the shine off the original.  So just thank god for Britain.

Frances With Wolves – “You’re a Wave”