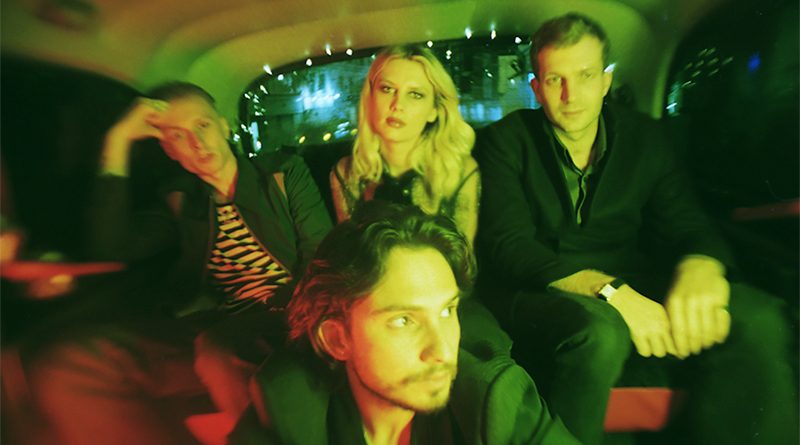 UK rock band Wolf Alice stopped by the Bowery Ballroom (QRO venue review) in NYC on November 12th & 13th, as they wound down their first tour in three years. Their critically acclaimed third album Blue Weekend (QRO review), released last June, has the been the source of much press coverage and garnered them a nomination for the 2021 Mercury Prize. After attending and photographing that amazing second Bowery show, QRO had a chance to sit down with Theo Ellis (bassist extraordinaire) for a quick chat.

Theo Ellis: I had a really special time. Both nights were equally great for me, to be honest. People always say when you go play at iconic venues that you’re going to have the best time. Sometimes they fall a little bit short because of expectations. I think a combination of not having played in New York for a long time and also playing such a unique venue made for a really great gig. Yeah, I think I’ll always remember it and it was all female mosh pits both nights which was really great to see so.

QRO: I wanted to talk a little bit about the record Blue Weekend. It was already written before everything shut down. You went into production during lockdown. How did all that affect the production process? Did you change any lyrics because of the way you felt at the time?

TE: I don’t think any of the emotional content of the record changed because of the pandemic, but in terms of the way the record was treated that was naturally changed because there was so much time just because of the nature of being locked in a studio. We were already in a residential studio and already optioned to go somewhere where you eat and sleep and wake up and go into the studio and that was before coronavirus became a reality for us. So, it was a voluntary kind of isolation that was then reinforced by being locked down. And that enabled us to go down into this real fine detail, which can be a bad thing. I think we kinda couldn’t see the woods for the trees by the end of it.

TE: Yeah definitely there was overthinking because people tend to overthink things anyway, but in that environment as well with that being the only thing you have to do. It’s really interesting. I don’t hear much lyrical reflection on the coronavirus. There was one song that Ellie [Roswell, singer/guitarist] changed the lyrics to that was nothing to do with that. That was much more to do with the subject matter she was dealing with so it’s interesting. It definitely informed the process in a different way. We don’t tend to write too outwardly in that sense. Things are quite personal usually. That’s not to say that would never change

QRO: So, when you’re locked down together, it’s just like recording a record normally because you’re together all the time anyway?

TE: Yeah, it’s magnified because you can’t go to the pub or the corner shop and you can’t have a kick-about in the park. So, it’s magnified. It’s more intense. It’s kind of like making a record on tour almost. It’s serious business.

QRO: So, what did you guys to relieve the stress? What did you do because you couldn’t go out?

TE: Well we’re not allowed out now, kind of. We’re bubbled up from the tour. It’s weird. At the moment in this environment, the emotion of the shows, seeing people react to the new songs, and also seeing fans who’ve come to shows for a long period of time, seeing them now three years on has been so amazing that it’s satisfied any need to go out and drink 50 tequilas. Each person has their own individual personal way of relaxing and unwinding. I’m pretty terrible. My attention span is awful so I’m always marching around a room somewhere. It’s difficult when there’s not much else to do but luckily, we’re so happy playing gigs that it doesn’t matter.

QRO: A lot more keyboarding on this record. How did all this come about? Evolution of the music?

TE: We’ve always had that. Always had loads of extra parts. In the beginning, we didn’t have the means to tour an extra member and we found exciting ways of playing the versions of those songs on the second record that we felt did justice to those songs. They were different but they were the four of us playing the best we could. It was unique and had the energy it required.

And then with this album, not only is there strings but there’s a multitude of samples and also we had Owen Pallett, who’s an Arcade Fire collaborator, an amazing string composer, helped with some of the parts that Ellie had written. There was a lot of digest and we got in a room with Ryan [Malcolm, keys], who we’ve known for a long time and he’s a joy to be around as a person and a really talented musician so it helped elevate the show. It’s been great having him as that fifth member on the road

QRO: So, what are you guys doing differently besides being in your own little bubble?

TE: Well, playing our songs with a new member feels like it’s elevated the sound a lot. Everything’s really about the show. We’re a little bit older and we’re really excited about trying to play these songs the best we can so we’re still looking at it with a fine toothed comb for the setlist and honing bits and getting it perfect. I’m not saying that we were negligent before but we’re just really committed to the gigs at the moment and it’s nice. It’s fun.

QRO: It doesn’t look like you guys are slowing down at all. The energy you guys bring to a show is pretty incredible.

TE: Yeah I’m trying to do some self-preservation to keep that energy going higher. I’ve already done a run around the monuments today, which was nice, to clear the head.

QRO: I watch you during the show and you’re just riling the crowd up.

TE: When I was a teenager, I had a notion of what rock stars were supposed to be this kind of cool and mysterious thing. And I feel, when performing on stage, I love to bring a lot of positivity and fun and getting everyone going a little bit. I really love seeing loads of people having a really good time. I’m trying to encourage it. I’m quite an energetic person so I just get excited and carried away basically. It’s not terribly calculated. It’s more just wanting everyone to have a good time. It was hectic on our side. There were all the girls that started the mosh pit were over there. It was great. I miss Bowery Ballroom already.

QRO: Hey, there was that girl that crowd-surfed up to the front and you brought her onstage.

TE: She was kinda bouncing off the stage. I was like ok, you’ve got to resolve this situation or you’ll be stuck there so. She was really cool though. She’s a lovely person as well. I’ve met her a few times.

QRO: Are you guys worried at all about crowd interaction during the pandemic?

TE: Yeah, we don’t do it. I like to put myself in the crowd quite a lot or used to. Especially in that size room, it’s fun or at least the option of it. But there’s so many people across this tour that want to come and see us play. We’re so lucky to have the opportunity that being a dick and getting in the crowd for a second if it means throwing the tour upside down. We’re not gonna do it.

QRO: So, what’s the plan when the tour ends?

TE: I’m going to Mexico City on Sunday myself. I’m going to meet my girlfriend in Mexico City. I’m spending a few days there and then I’m going to the coast and I’m going to lie down for a little bit and just have a nice time. Because I haven’t been out of London for a hell of a long time. I’m very lucky to be able to do that. And then in fucking ten minutes, it’ll be Christmas.

QRO: It’s great that you’ll have the opportunity to really decompress. I don’t know how long it takes for the brain to start running again and you’re like, it’s time to write the next record.

TE: 45 minutes in. It’s been so long since we’ve been able to do things because of coronavirus that I’m as much of a fan this process of going around America as the people who are coming to the shows. So, I haven’t been on my laptop making tunes with a guitar too much. I don’t know about the rest of the guys but Joff [Odie, guitarist]’s always making something. I feel like, in January, I’m going to start making tunes. It’s been a crazy year and we’ve spent a lot of creative energy.

TE: I have not spent enough time in NY. I feel like we’ve always been there when we’ve done loads of press and loads of shows. There are so many good places to eat and I’m absolutely failing on that. We spent a lot of time in Los Angeles because we recorded the second record [Visions of a Life – QRO review] there, so I’ve got plenty of recommendation but this is a call out to someone when I’m able to come to New York, not as a touring musician, but as a consumer of the delights of the city. I need someone to take me to the best spots because I don’t have those recommendations.