So although it was brick in the Bowery, it was warm in the Bowery Ballroom, where a sold out crowd convened to see a fellow New Yorker, Theophilus London.... 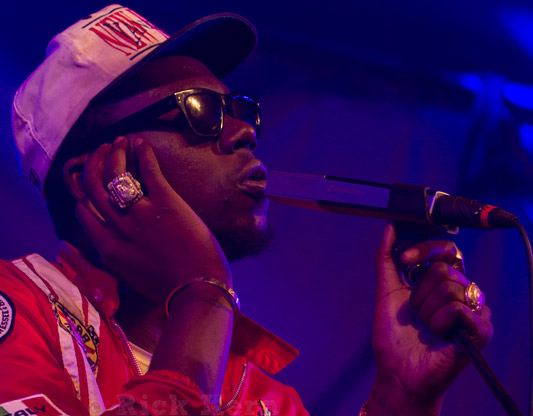 Click here for photos of Theophilus London at Stubb’s in Austin, TX on July 27th, 2013 in the QRO Concert Photo Gallery

Click here for photos of Theophilus London at 2012 CounterPoint Festival in Atlanta, GA in the QRO Concert Photo Gallery

Click here for photos of Theophilus London at Beauty Bar Ballroom in Austin, TX on January 27th, 2012 in the QRO Concert Photo Gallery

Click here for photos of Theophilus London at CMJ 2010 in New York, NY in the QRO Concert Photo Gallery

The air is a bitter cold in New York, and the snow has browned in the gutters and refrozen, forming semi-solid lumps in the sidewalk that evade all attempts at traction. But there are a great deal of that type of New Yorker who stubbornly plows through the frigidity and forays in and about the city, as if to say to mother nature: you don’t control my social life. So although it was brick in the Bowery, it was warm in the Bowery Ballroom (QRO venue review) on Monday night, February 16th, where a sold out crowd convened to see a fellow New Yorker, Theophilus London.

London’s music shuttles between sparsely electronic and imperatively danceable. Sometimes it seems like Theophilus can’t decide whether he wants to be a dance artist, a rapper, an R&B crooner, a pop star or an indie act – but he doesn’t necessarily need to settle on one of those options. His Trinidadian heritage pops up in in the occasional dancehall rhythm, and sometimes he ventures into punk territory. But unlike his compatriots in the alt-R&B game, danceability almost always takes priority over strangeness. London is tall and he’s stylish. In a black trench coat over a white t-shirt and jeans, and a broad brimmed black hat and sunglasses, he took the dimly blue-lit stage and opened with the sultry creepings of “Water Me”. A ferocious drummer kept the beat while the guitarist sprinkled in riffs and solos and a bassist grooved between his bass guitar and a stack of keyboards. It became clear as the show progressed that London was also using a laptop on a table, stage left, to fill out the sound – the backing track taking a more prominent role on the songs that needed it, like “Can’t Stop” where the laptop took care of Kanye’s verse.

“They say I’m from Brooklyn on Wikipedia and shit, but when you’re from New York, you gotta know at least three boros! You gotta know where the best roti is!” quipped London, clearly happy to be in his city playing to his people – many of whom he invited onstage through the night. The special guest appearances began when Theophilus brought Dev Hynes (a.k.a. Blood Orange) up to sing their collaborations, “Flying Overseas” and “Figure It Out”. London’s closest artist analog is probably Hynes, but where Blood Orange goes delicate and sensitive, Theophilus London tends to take a darker aesthetic and a sharper edge.

London grabbed a girl from the front row to serenade during “Smoke (Interlude)” and she nearly upstaged him with her dance moves. However, from there the guest appearances began to derail. London announced that Jesse Boykins III was in attendance and invited him onstage, but he never materialized. Then London invited Brooklyn rapper Manolo Rose up, who brought with him the opening act, Atlanta’s Father, and a glut of taggers-along in various stages of ridiculous dress or undress. Thus began the unraveling of the show with a period of chaos in which it was no longer a Theophilus London show with live band and charismatic lead man, but instead regressed into a generic rap show, complete with a stage suddenly filled with more bacchanalia and belligerence than beats or music. But an atmosphere of revelry is to be expected at a hometown show, especially when that hometown is New York City. Once order was restored and the stage population thinned back to the four actual music-makers (and the laptop), London played a few more songs, and everyone danced or swayed or got distracted by who they came with, and when it was over those cold-immune or cold-ignoring New Yorkers mobbed the coat-check and ventured back out into the cold of the Bowery.