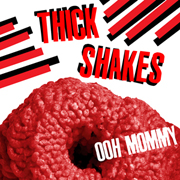 The recent upsurge of garage-rock is either a blessing or curse, depending on your aesthetic worldview.  The naysayers claim that all these bands sound the same: jangly guitars, low production values, and rapid-fire snark delivered over bright and buzzy (yet somewhat homogenous) ‘60s pop themes.  Call it the White Stripe-fication (QRO live review) of America.  On the other hand, the devil (and delight) is in the details.  Garage-rock distinguishes itself by a certain rock ‘n’ roll literacy; the music is often a homage to the band’s favorite niche genre, or a mash-up of several genres.  Case in point: Thick Shakes, a trio from Jamaica Plains, Massachusetts that could have been the Factory house band if the Warholian phenomenon had kicked up ten years earlier.  Their recent release Ooh Mommy spikes early ‘60s pop progressions with a weird psych mixer, pours the cocktail into the gas tank of your daddy’s T-bird, then adds drums and backing vocals to whatever noise belches out the tailpipe.  Garage at it’s best.

The go-go vibe is especially strong on opener "(Baby) You’re a Starfish".  The dime store organ progression on the refrain takes you back to a simpler time when women found knee-high boots and miniskirts empowering.  The ‘wink, wink’ Jacques Cousteau shout-outs lets you know, however, that they know, that we know, that they know, that we know that they know the ‘60s are over.  But that doesn’t mean we can’t enjoy the pop cultural heritage.  Like The B-52s (QRO album review), Thick Shakes is half rock band, half rock relic.  The similarity is doubly strong when you add in the playful he/she vocal jousts of "Memory Foam" and "Paid to Care".

One standout song, "Glass Mask", takes a slightly different tack from the pop archival trend.  It draws from the dark underbelly of mid-sixties pop without being a lo-fi rehash.  There’s a lot going on in one fairly simple chord strum: weird rhythms and odd lyrics combine to create a genuinely perturbed atmosphere.  It’s a simple song without filler.  Thick Shakes has the tendency to throw in standard blues progression-y stuff to bulk out songs when they’ve run out of original melodies to play.  The result is that parts of the album are more or less interchangeable, and the ear gets lost.

But what are we talking about here?  This isn’t high art.  Garage, like punk, favors participation against the cultivation of a treasured elite.  That means a lot of bands are coming up with a lot of great stuff.  For the connoisseur times have never been so good.  We’ve got the Soft Pack (QRO album review), Girlfriends (QRO album review), Shark? (QRO album review), and now Thick Shakes, adopting a similar musical lexicon to say very different things.  You may not like all of the above, but if you can’t appreciate the spunk and grit that a band like Thick Shakes brings to the table, you might not like rock ‘n’ roll!