<img src="http://www.qromag.com/wp-content/uploads/2010/06/thievingironsthemidnight.jpg" alt=" " />Out of the ashes of Pela, guitarist Nate Martinez forges his own alt-country road as Thieving Irons. ... 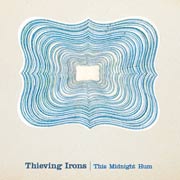 The break-up of Brooklyn indie-rock outfit Pela (QRO spotlight on) came as a disappointment, but it did free up guitarist Nate Martinez (QRO interview) to work on his own project, Thieving Irons.  Of course, Thieving Irons doesn’t sound a whole lot like Pela, as the old band was more focused on singer/guitarist Billy McCarthy, while Irons is Martinez’s "baby".  In his baby’s debut, This Midnight Hum, Martinez & Irons channel a strong alt-country tone, only occasionally marred by out-of-place indietronic keys.

Click here for QRO’s interview with Nate Martinez, when in Pela

Click here for photos of Thieving Irons at Rock Shop in Brooklyn, NY on February 13th, 2012 in the QRO Concert Photo Gallery

Click here for photos of Thieving Irons at Zebulon in Brooklyn, NY on November 28th, 2011 in the QRO Concert Photo Gallery

Click here for photos of Thieving Irons at Pianos in New York, NY on April 25th, 2011 in the QRO Concert Photo Gallery

Click here for photos of Thieving Irons at Northside 2010 in Brooklyn, NY in the QRO Concert Photo Gallery

Click here for photos of Thieving Irons at Union Hall in Brooklyn, NY on June 17th, 2010 in the QRO Concert Photo Gallery

Midnight is strongest when Thieving Irons go fully for the alt-country sound, matching the likes of genre icon Wilco (QRO live review) on such pieces as the subdued "These Shaking Walls" (bringing to mind some of the best of Wilco’s Sky Blue Sky – QRO review), twang loss-meets-sweetening rhythm "Babylon Is Burning", or the more old-timey & effective "Red Horses".  But the Casio keys employed on tracks like opener "Ashes On the Riverbank", "I Can Hear a Pin Drop" or "On the Horizon", while fine in and of themselves, just don’t quite fit with the less-than-electronic tone to the album – "Horizon" is reduced from an excellent indie-country sad relax into ‘only’ a very good one, but "Pin Drop" doesn’t fare as well.

However, there are exceptions to this rule.  The bit of a trot to "Wave’s Gonna Break" lets the keys fit better, if making the piece a bit ‘up with people’.  And the preceding "Sunken Houses" goes fully for the keys, so not so out of place.  But it is "Tow the Line" where Thieving Irons actually exceed their alt-country greatness, as the song grows into a fuzzy evocation.

Last fall, a spate of Brooklyn acts broke up, including QRO favorites Pela & Harlem Shakes (QRO spotlight on).  However, Shakes guitarist Todd Goldstein is still going on his own project, ARMS (QRO album review), a great band, even if it doesn’t sound like Harlem Shakes.  Nate Martinez’s Thieving Irons similarly goes in a different direction from his old band, as This Midnight Hum follows the strong alt-country road.

This Midnight Hum is out on August 24th – this is an early review in anticipation of Thieving Irons’ headlining the QRO Mag/Ampeater showcase at the Northside Festival: Sunday, June 27th at Bar Matchless (QRO event page).