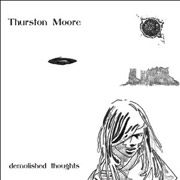 It took twelve years for Thurston Moore, frontman for the legendary alt-punk Sonic Youth (QRO live review), to follow-up his solo debut Psychic Hearts with 2007’s Trees Outside the Academy (QRO review), but only four for the subsequent Demolished Thoughts (though Moore, like Sonic Youth, left long-time major label Geffen for big indie imprint Matador).  Demolished resembles Trees in that the ‘father of distortion’ eschews such maneuvers for a stripped down, even acoustic feel, to the point of employing a strings section.  However, Demolished doesn’t vary enough, with each piece closely resembling the last, for really just one, long, Thought.

Given that Thurston Moore virtually single-handedly gave birth/revived/kept going the genre of noise-rock, it is still notable that his solo work is anything but.  From opener “Benediction” to closer “January”, Demolished Thoughts has Moore and his acoustic guitar up close and intimate, backed either by strings, a rather heavy bass (played by producer Beck – QRO album review), or both.  The guitar is still paramount – many tracks are close to instrumentals, with limited vocals – but it’s an acoustic guitar, given a procession force by Moore (and only occasionally sounds like ‘Sonic Youth Unplugged’).

Click here for photos of The Thurston Moore Band at 2015 NOS Primavera Sound in Oporto, Portugal in the QRO Concert Photo Gallery

Click here for photos of The Thurston Moore Band at 2015 Primavera Sound in Barcelona, Spain in the QRO Concert Photo Gallery

Click here for photos of Thurston Moore at Union Chapel in London, U.K. on December 2nd, 2011 in the QRO Concert Photo Gallery

Click here for QRO’s review of Thurston Moore at Maxwell’s in Hoboken, NJ on September 24th, 2007

It’s a strong, compelling sound, and one that Moore consistently does well – but does consistently throughout Demolished.  It is honestly hard to distinguish between one track and another (the relatively limited vocals – which also don’t vary much – don’t help in this regard).  The songs also go on a while – never less than four minutes, with the longest, “Orchard Street”, near seven, and the lack of variety makes each feel longer.

Thurston Moore is an ultra-accomplished musician in many genres, from experimental to punk and even pop, and Demolished Thoughts is another notch on that belt.  But it’s only one notch.