Just before the start of their big North American tour with The Psychedelic Furs, Tim Booth of James talked with QRO.... 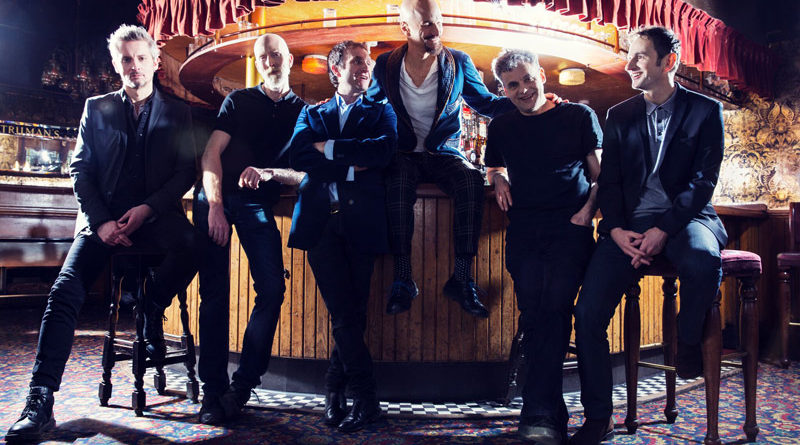 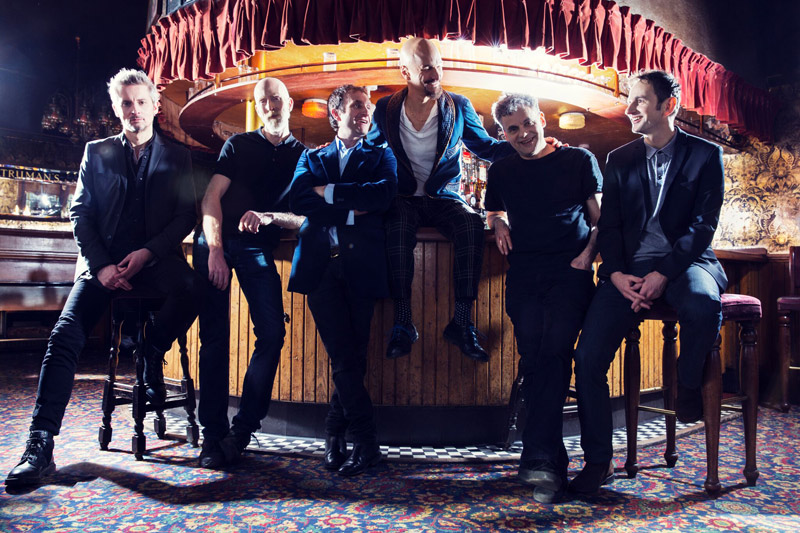 Just before the start of their big North American tour with The Psychedelic Furs, Tim Booth of James talked with QRO. In the conversation, the singer & frontman discussed the upcoming tour, their newest record, Living In Extraordinary Times (QRO review), getting caught by the record label trying to sneak in a double-album, darker Times, having a different set list for every night, what young audiences want vs. what old audiences want, “Coming Home” (again), going into the crowd these days & years past, and more…

QRO: How did this upcoming tour with The Psychedelic Furs come about?

Tim Booth: We’ve been wanting to come out to America, but because of the size of our band, and how much it would cost, it was financially difficult to come on our own. We’d been looking for a touring partner, and Richard Butler [lead singer, Psychedelic Furs] was nice enough, over the last year or so, was like, “Should we tour together?”

TB: I’ve always liked the Psychedelic Furs. I remember as sixteen-year-old, or seventeen-year-old listening to them.

QRO: Is it your biggest North American tour in quite a while?

TB: We were there four or five years ago. So yes, it is.

Record companies freak out over double-albums. We got caught trying to sneak one past them…

QRO: How was making Living In Extraordinary Times?

TB: Pretty much a joy. It flowed very beautifully for us.

And then we were lucky enough to stumble upon Beni Giles and Charlie Andrew. Charlie Andrew, the alt-J producer, came to a gig, came backstage, and said, “I’d love to make the album.” And it was just a joy to finish. I don’t think there was a bad word between us.

Some of the tracks which will be extras or b-sides, they’re as good as anything on the album. I somehow wish they were on the album. Very much, songs like “Moving Car”, and “Trouble” should be on the album.

But record companies freak out over double-albums. We got caught trying to sneak one past them…

TB: [laughs] You’re saying this one is darker than those?

I would agree with you on that. There were some really uplifting love songs on the last one, but on the last one, Girl At the End of the World, even the love songs always had a little threat of something. [laughs] People in love with somebody, your odds are you’re gonna get your heartbroken.

I’ve always felt a bit like that. It’s like, even when wonderful things are happening in my life, it’s hard for me not to gravitate towards, “But it’s shit sometimes…”

To me, that’s being realistic. I think that’s why we’ve lasted so many years – is because we write songs that people can relate to. And not many of us are living in paradise.

I think that’s why we’ve lasted so many years – is because we write songs that people can relate to. And not many of us are living in paradise.

QRO: I noticed songs about America & its politics, “Hank” & “Heads” – no song about Brexit?

TB: Well, I live in America. I’m an American and English citizen.

If I was living in England, I’m sure I would write about Brexit. But I was here, watching Trump get into power. There’s only two directly political songs on the album. I’m not a big fan of political songs.

There’s two political songs on the album; the rest, there are quite a few that are influenced by what is going on, but not necessarily in a negative way. If I was really writing about Trump, it would be ‘Living in Appalling Times.’ I also see the real positivity. An amazing positive, negative coming into the culture.

Some of it is due to the rise of nationalism, and the rise of white, male toxicity. So the album is called Living in Extraordinary Times, because there’s this polarization in this country going on, between this small-minded narrative of, ‘me, me, me – my country, my career, make America white again,’ and the more expansive, inclusive consciousness of, ‘We are all one.’

“There’s only one / Human race / Many faces / Everybody belongs here.”

That song’s probably the most optimistic summation of the record: “Many Faces”. There is a fight going on, between the two, and that’s what’s projected on this record.

I write the set lists one hour before we go on stage.

QRO: For the upcoming tour, what are your set lists going to look like?

TB: I write the set lists one hour before we go on stage.

We take a look at the feeling, the atmosphere, the weather, what day of the week it is, what the audience looks like, what we feel like, and we make a set list on the night, each night. Each night is different.

And that’s to the friendship in the band. Because, most bands do the same songs every night, the same order. I find that really against experience to your artistry.

I do know we are in love with the new album. The new album is going down like a storm, live. So, anyone who comes, be advised: have a listen to the new album, because there’s going to be quite a few songs from that record.

We have two hundred-and-fifty, three hundred songs to choose from. It’s a big pile.

QRO: I was at your New York show in 2014 (QRO review), where you didn’t play “Laid”, someone in the band saying that, “New York is beyond that.” You know that there are gonna be Americans on this tour who are gonna demand “Laid”…

TB: We get that every night. It’s okay.

We’re known as a great live band. Even if you can’t expect your song, you’re still gonna have a great time. We do sometimes challenge expectations; I understand that. But we’re pretty known for our live concerts, and the fact that we take risks.

We keep going our path. If you come really demanding a song, you’re probably gonna go away a bit upset; in fact, most likely. [laughs]

But if you come see what we’re playing, you’ll see a great band, live. We’re one of the great bands live, now. We’re pretty confident in that. Unless we have a really bad night, you’ll come away feeling like you got something you don’t get from most bands.

TB: We had this little girl, and I also would FaceTime my son, so I could see his face on the other side of the camera, which got me into the zone.

QRO: Whose idea was it for the ‘Problem with Connection’ halt in the video? I actually laughed out loud when that happened (once I realized it wasn’t a problem with my internet…).

TB: We were editing it, and I was in the bath, I think, that night and I had that idea of making it look like FaceTime had frozen. I rang up Leif [Tilden, director], “I got this great idea, we would freeze it and everybody would think their computer froze up, at home.”

QRO: How much of that song is from your own life – I imagine that touring bands do a lot of FaceTime…

TB: That song is very much from my own life. That’s where I came up with the idea.

I have a fifteen-year-old boy, and I have to go away and tour frequently. I reserve these blocks of time, and even that’s not long enough. That song is from the heart, about my own experiences, and his experiences.

I didn’t know that song, I would be so emotional about it until I wrote that song. And then I wrote the song, and came to the studio after I did it, and I was like “Oh…”

I realized, that’s how really good songs are written, from the unconscious, work. They connect you to your unconscious.

I realized, that’s how really good songs are written, from the unconscious, work. They connect you to your unconscious. And you go, “Oh, my gosh…”

There are songs that come, that I don’t understand at the time. Some of them are quite prophetical, in that they are clever, and they prophet what’s going to happen a year later, when the song gets released.

Sometimes, I’ll right a song and go, “What the fuck is that?” And a year later, it will come true.

TB: Yes. “Come Home” which is really about leaving the mother of my first son, who is now a young man. That song is a lot about the shame and guilt I felt about leaving him behind.

QRO: Much delayed sequels are all the rage…

TB: Yeah. That must be the longest delayed sequel in history, I think – not many people do sequels to their own songs. They do it for films, but not many musicians do that.

James’ video for “Better Than That”:

QRO: Where was the video for “Better Than That” shot?

TB: Albert Hall, but not the Albert Hall in London, a smaller version in Manchester.

QRO: With your crowdsurfing and climbing the balcony, if something had gone wrong, wouldn’t that have ruined the video?

That’s what I do when I perform. If the opportunity arises, I go with it.

Of course, you don’t want the performances of the songs to be predictable. This is why we change the set list every night.

I go on a walkabout, to see who’s here.

People who were screaming abuse, it was really fascinating, I didn’t get punched – people were actually very welcoming.

I learned that, really, on the [1997] Lollapalooza tour, with Tool, Snoop Dogg – and the audiences were really hostile. After the first two days, people screaming abuse, we went out and bought the sparkly, mirror ball, multi-colored shirts and dresses, and we dressed up. We thought, ‘We’re really gonna scare the shit out of them.’

We were on that tour for six weeks. Every night, we’d go up, and they’d be going, “You faggots!” And I’d go, “I appreciate the fact that you’re attracted in me, and thus inquire about the nature of my sexuality.”

And then I’d go walk about in audience, after just finishing. People who were screaming abuse, it was really fascinating, I didn’t get punched – people were actually very welcoming. They didn’t want to hit me. And so I learned how to go into an audience.

I was in a neck brace, too, at the time.  More vulnerable than anything I do now.