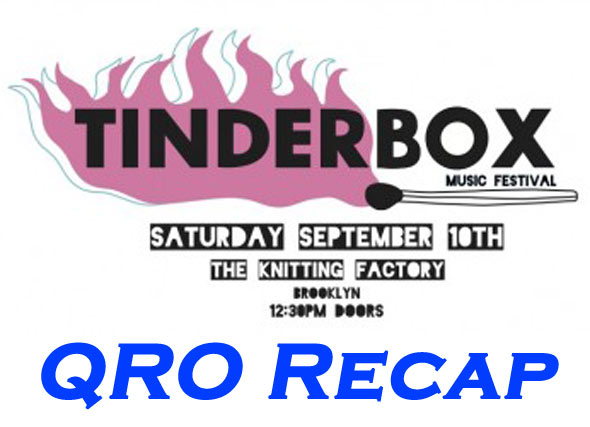 On Saturday, September 10th, Brooklyn’s Knitting Factory was host to the Tinderbox Festival – a whole host of artists playing in benefit of Girls Write Now and Willie Mae Rock Camp For Girls.  Yes, the line-up (and crowd) were lady-friendly, with seemingly all of the acts female-fronted, and most at least 50%+ XX – but guys didn’t stick out like a sore thumb, and the event was anything but one-note. 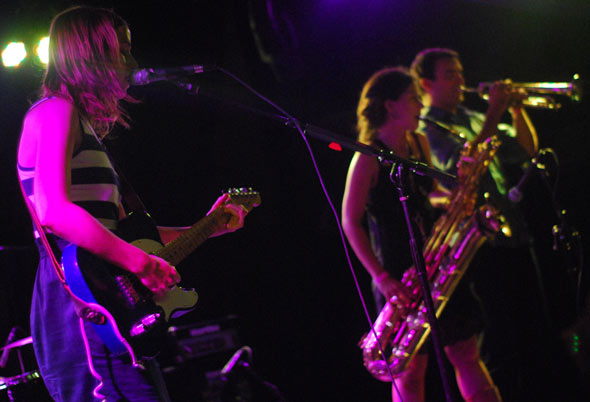 The clear headliner of the day was Holly Miranda.  The former Jealous Girlfriend (QRO spotlight on) has seen her profile rise significantly since heading out solo with The Magician’s Private Library (QRO review), but at Tinderbox she shifted from the airiness of that record for more energy and even a blues-lady feel, thanks to a backing band that was just a drummer and two horn players.  The other ‘buzz band’ at Tinderbox was the prior XYLOS, who had a bigger electro sound with female vocal harmonies. 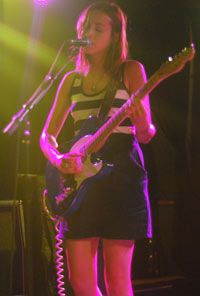 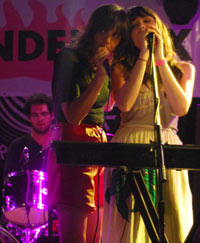 But perhaps the best received acts were the ones who had a ton of friends in the crowd.  Before XYLOS, Charlene Kaye & The Brilliant Eyes had enough fans who knew her/their stuff to sing the male part in one of the songs; the group started ‘80s New Wave/disco like Blondie (QRO live review), but went kind of country/folk once Kaye strapped on a guitar (especially when she played solo).  Prior Alyson Greenfield had the most friends in the audience (including her mother), but that’s because she organized the whole dang festival!  Indeed, her hilarious banter, about how hard it was to set up everything & hadn’t eaten or slept (when she mentioned that she hadn’t eaten enough pizza, a slice was brought on for her from backstage), might have been better than her actual music, where she seemed to constantly jump from one instrument/set-up to another; she stared with a beatboxer named Shane, ended with a string quartet, and played things like chord organ and glockenspiel in between.  And before Greenfield, The Debutante Hour had cello, ukulele, accordion, and Franz Nicolay (formerly of The Hold Steady – QRO live review). 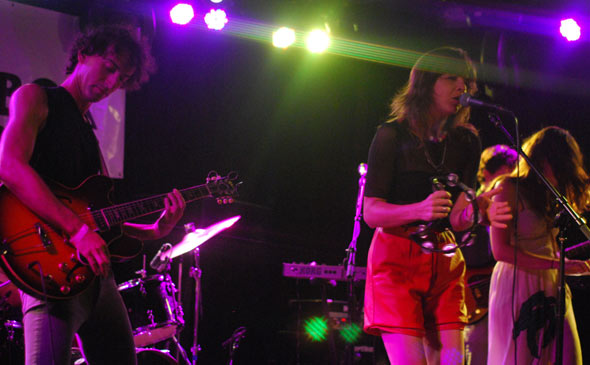 Note that these artists all played in Knitting Factory’s main room.  The front room/bar also had artists, but they were basically squeezed over into a corner of the booths (Brooklyn’s Knitting Factory – QRO venue review – is not the multi-space area that it used to be in Manhattan – QRO venue review).  The indie-pop Miss Geo, R&B/soul piano Sarah Walk, danceable violin of Sweet Soubrette, and polka-y Mira Stroika all did the as well as they could, but it was front room closer EULA who did it best – garage/punk like theirs can always handle a DIY setting. 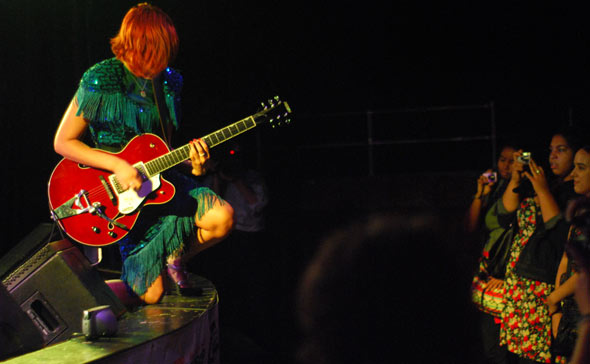 Still, that was kind of to be expected, as was the L train not running to the nearby Bedford Avenue stop that day – it seems to shut down every weekend, and Tinderbox is hardly the first festival to be hit with the cancellation (at least the J, M & Z ran to just-about-as-close Marcy Avenue, unlike the no trains nearby of July’s Bushwick Walkabout – QRO recap).  What was totally unexpected was that Knitting Factory couldn’t serve alcohol!?!  There were signs up next to the two bars, saying, "Due to an administrative issue with New York State Alcohol Beverage Authorities" they couldn’t serve alcohol.  Unconfirmed reports are that the venue forgot to file for renewal of its liquor license.  Whatever the reason, it kept the event from becoming a party, really – if you even wanted a glass of water, you had to ask the front room bartender who busy on his laptop, and uninterested in helping anyone.

Dry-ness aside, Tinderbox did put together a nice line-up that kept up the day’s momentum throughout.  Who knows how much money it raised (Knitting Factory really shouldn’t charge the benefit anything, since the place couldn’t serve drinks – without it, the venue is nothing more than a PA system with a roof…), but it was an interesting day of surprisingly diverse music.