<img src="http://www.qromag.com/wp-content/uploads/2009/07/tinymastersoftodayskeletons.jpg" alt=" " />The only thing special about Tiny Masters of Today is their age. ... 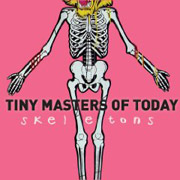 When a band is composed of two siblings, age (currently) fifteen & thirteen, it’s natural to think they might just be a novelty.  Brother & sister Ivan & Ada were actually younger when they first broke out, with 2007’s Bang Bang Boom Cake, getting great press in England, including the one-and-only David Bowie (QRO album review) calling them “genius”.  However, the same can be said now with their follow-up, Skeletons, as should have been said then: the only thing special about Tiny Masters of Today is their age.

Lo-fi is all the rage these days, with ‘shitgazing’ bands like No Age (QRO live review) and WAVVES (QRO photos), but, as many have pointed out, the main reason musicians go lo-fi is because it’s easy and cheap.  Most of them move on as they go forward.  It’s completely understandable that a pair of pre-teens would start off by doing lo-fi garage-pop.  What isn’t understandable is why people would think it was particularly special.  Bang Bang Boom Cake made Art Brut’s (QRO spotlight on) debut Bang Bang Rock ‘n’ Roll look intricate and complicated in comparison, and Tiny Masters of Today have not advanced much with Skeletons.

This isn’t to say that it’s outright bad music.  Skeletons’s lo-fi garage pop can often be catchy, like with “Monkey In the Middle”, “Big Stick”, or the title track.  But it’s always simple, and can even get grinding, like with openers “Drop the Bomb!” and “Two Dead Soldiers”.  The record particularly sags at the beginning with those two, and at the end, with the uninspired “Ghost Star” and “Understandable Honesty”, and the simply inane lyrics of “Abercrombie Zombie”.

It can feel bad, ragging on a pair of young kids who are doing their best.  Were you this able when you were just starting high school?  If you saw them at a school recital or in their parents’ actual garage, you’d think they were doing a good job, and wish them well.  But as an outright, released record, there’s nothing to write home about but their youth.

MP3 Stream: "Monkey In the Middle"

Ryan Lenssen of The Most Serene Republic