Tokyo Police Club have long been more pop than indie, though have mostly just straddled the line nicely.... 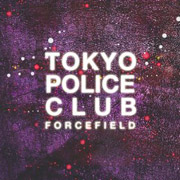 Tokyo Police Club have long been more pop than indie, though have mostly just straddled the line nicely – this is a band that can cover both mega-star Miley Cyrus and gone-too-soon Brooklyn hipster act Harlem Shakes (QRO spotlight on) on the same covers record (QRO review). They’ve also fought getting older, but have matured at least somewhat with fuller albums like 2010’s Champ (QRO review). Their first full-length since then, Forcefield, ups the pop & catch, though doesn’t feel as substantial.

Opener “Argentina I, II, III” is what you expect/look for from Tokyo Police Club: a catchy indie-rock song about a girl (even if the three-parter does go on at eight-and-a-half minutes). There’s lots of catch on Forcefield, like the absolutely infectious “Miserable”, but it does veer into straight pop and even dance on songs like “Hot Tonight” and “Beaches”. The band does seem to have adopted elements off their covers album, Ten Days, Ten Covers, Ten Years, from Miley to pop to Harlem Shakes’ line about “quick quips” on closer “Feel the Effect”. However, the short album (at just over thirty minutes, despite the long starter) doesn’t have quite the substance and staying power of much of TPC’s prior work – the only true growth feels like “Feel the Effect”, a sadder & synth-ier wistful tale from boys that you wouldn’t think were old enough to get wistful about anything.

But they can still throw a catchy hook and a quick quip (has anyone ever done a cheery song about kids with guns like “Toy Guns”?), even if it’s not the epic step forward that you might have been hoping for.