More Click here for photos from this show in the QRO Concert Photo Gallery Click here for all of QRO’s coverage of Tokyo Police Club in QRO’s ‘Spotlight On... 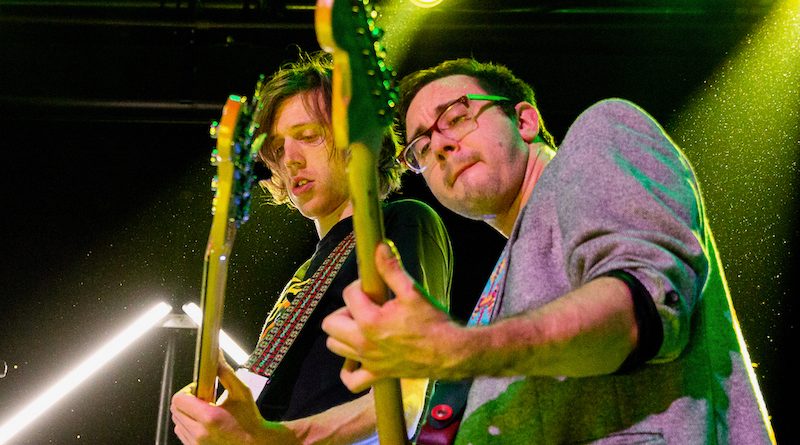 There’s a certain generation of indie-rock fans, too young to be Gen X, too old to be Millennials, sometimes called “Gen Y,” other times, “Geriatric Millennials.” We were too young to go see Nirvana, but knew enough not to get swept up in the pop or emo crazes of the turn of the millennium. We hated George W. Bush, loved Barack Obama. And we were into the indie-rock of the late aughts/early teens, after The Strokes but before EDM. There is a special place in our hearts for Toronto’s Tokyo Police Club, who brought their 2010 full-length Champ (QRO review) in full to New York’s Bowery Ballroom on Friday, November 19th.

Post-pandemic, it was special to see Tokyo Police Club, and special to return to Bowery Ballroom (QRO review). The Lower East Side space has survived most other closing or moving to Brooklyn, even the split in the ‘Bowery Presents’ company that means Bowery Ballroom isn’t part of Bowery Presents (it also isn’t on Bowery Street…). If you were in New York in your younger days, you probably spent some time at Bowery, but had slowly grown older/richer/more responsibilities, going to bigger, more expensive, uptown venues, if you go out at all. Now you’ve got a kid(s), or at least your Instagram & Facebook is filled with photos of your friends kids. And you certainly hadn’t been out much in the last year-plus. But Bowery was still here for you, almost as if nothing had changed (they check your vax card along with your I.D. at the door, and the stage floor bar finally takes credit cards, plus drinks are little more expensive, but haven’t gone up as much as other places).

It was a packed Bowery, for a show that probably could have been at a larger place like Webster Hall (QRO venue review) or Brooklyn Steel (QRO venue review), and the crowd was at least a few years – and one pandemic – away from being used to being in a crowd. Maybe you revived your ability to snake through people, maybe you stayed back at that bar. But this was a night to be young again.

Tokyo Police Club burst through fifteen years ago with youthful energy, and Champ might have been the pinnacle of that style from them. Singer/bassist Dave Monks asked, “How’s your younger brother / What grade is he in?” on “Favourite Colour”, and sang about covering younger eyes during the “bad bits” on “Bambi”. That was way back 2010, yet this night they were still those youths. Monks was an overgrown teen, hair in his face. Keyboardist/guitarist Graham Wright was running around the stage whenever he could, from back-to-back moments to sharing a mike (even though he had his own), the sleeves of his sport coat pushed up like he was in the video for a song from a John Hughes movie. Guitarist Josh Hook’s beard, glasses, and preternaturally grey hair made him the early old rocker, still playing like he’s in his parent’s garage. And drummer Greg Alsop still looks like the lost Jonas Brother, or the younger sibling of their country’s prime minister Justin Trudeau.

If you were going to this show, you knew Champ, you loved Champ, from “Favourite Food” to “Frankenstein”. Indeed, this isn’t the time to go back to going out on some new band, but an old favourite, someone you knew would deliver, and Tokyo Police Club did. This was a show where you had so much fun that you didn’t go to looking at your phone.

After “Frankenstein”, the band left the stage, but you didn’t have to be a show expert to know they would be coming back. However, returning to the stage was Monks solo on acoustic guitar. It was a sonic shift, but he was lovely playing his solo album’s “Love”, “The Harrowing Adventures of…” off of Tokyo’s Elephant Shell (QRO review), and TPC’s (QRO review) “Ready To Win” (and mention that, “I fucked up on Letterman”). The rest of the Club rejoined Monks for smoother Champ-era non-album single “Top Five!”. And it wasn’t like Tokyo wasn’t going to go even older than Champ, with two classics from the classic debut EP, A Lesson In Crime, with “Nature of the Experiment” and “Citizens of Tomorrow”, including both Hook and Wright playing tambourine in the moments they didn’t have anything else to play, because they just wanted to still be part of the great songs. And they closed their encore with the extended indie-pop of “Argentina (Parts I, II, III)” from Forcefield (QRO review).

And yet, there was still more. The nature of the ‘play an album in full’ show means there’s more time after the album, but usually that just means an extended encore, not a second set, and then an encore. But Tokyo Police Club came back for two from 2008’s debut full-length, Elephant Shell, another youthful one in “Tessellate” and killer rocker to close the night, “Your English Is Good”.

While American musical touring is going into its holiday season hiatus, and fans have to spend their show dollars on gifts for friends & family (like kids just old enough to love Christmas, while their parents no longer go out on New Year’s Eve), it does look like live concerts are back from the pandemic halt. Or, as Tokyo Police Club said on Champ’s “Breakneck Speed” and “Frankenstein”, “It’s so good to be back.”

Houndmouth – Good For You