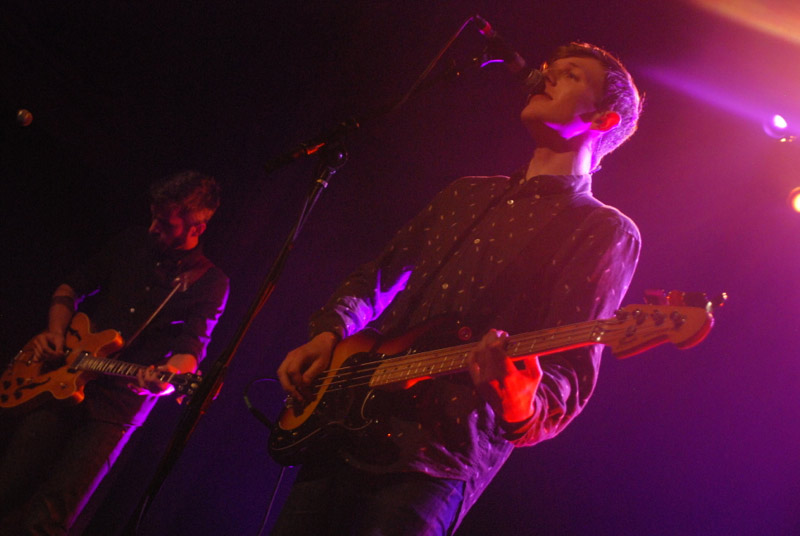 When Tokyo Police Club debuted in 2006/2007 with EP A Lesson In Crime, they looked to be the kind of wonderful youthful indie-rock that many thought would flame out fast, repeat themselves ad nauseam, or soon get old. But three more full-lengths in, the band has managed to not just stick around, but also stay young while growing up. Case in point was their great Thursday night show at New York’s Webster Hall on May 15th. 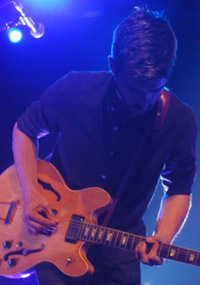 Touring behind last month’s Forcefield (QRO review), New York was one of only a few stops (that also included Atlanta’s Shaky Knees Fest – QRO photos). Yet the show was anything but a ‘playing just the new album’ event – interestingly, the prior Champ (QRO review) actually had one more song on the set list. However, that’s counting evening/Forcefield opener “Argentina (Parts I, II, III)” as one song – even the crowd cheered at the end of one part like it was the end of a whole song. Tokyo Police Club mixed and matched from Forcefield, Champ, debut full-length Elephant Shell (QRO review), and Lesson throughout the evening; they’ve lived long enough that they have enough material to do that. 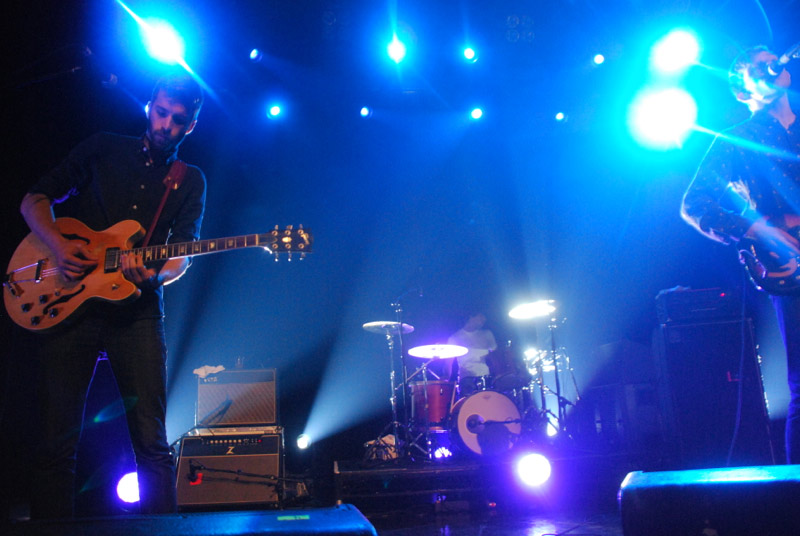 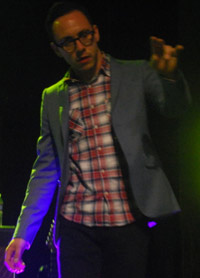 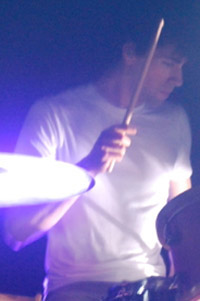 Not that the band seemed ‘old’. Anyone that’s listened to their records knows said youthful indie-rock, but it’s even more so live, with singer/bassist Dave Monks, guitarist Josh Hook, and keyboardist/guitarist Graham Wright (QRO interview) bouncing around on stage – of course, drummer Greg Alsop (QRO interview) is stuck on skins, but Wright makes up for that with even more dancing in whatever moment he’s not touching the keys. But more was to come. 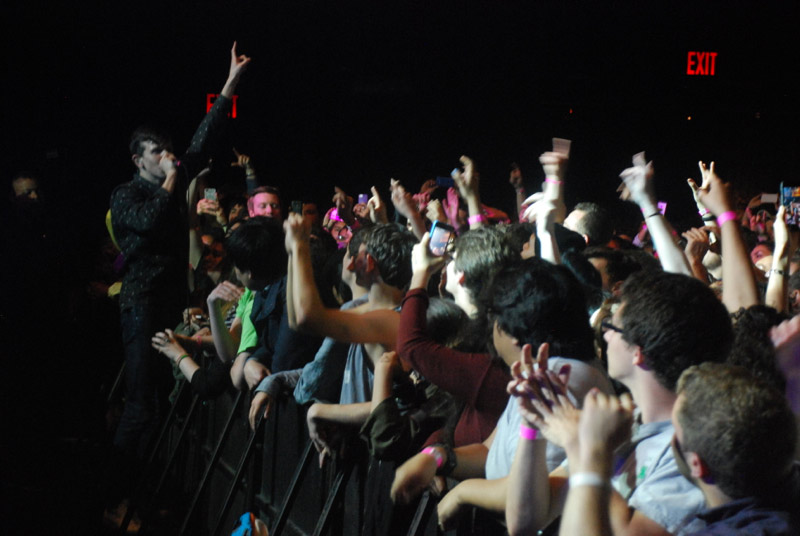 Among concert photographers, Webster Hall (QRO venue review) has something of a notorious reputation, not for lighting problems (though it is heavy on the smoke machine), but because the photo pit there is barely there, just enough width between the edge of the stage and the barrier for one person squeezed in (and no security keeping fans out). Yet this night the pit was a full one, including security on either end (which did prevent your correspondent from spending the whole evening in a corner of the pit…). This wasn’t because Webster had decided to upgrade (it was tiny again the following night for Elbow – QRO photos), but because TPC had thought ahead: during “Frankenstein” chorus of “So good to be back,” Monks went into the pit to high-five fans and lead the audience sing-a-long. 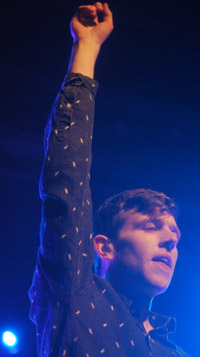 Other choice moments of the main set included the crowd cheers before the new “Toy Guns” (the happiest song ever that references kids with firearms…), favourite follow-up “Favourite Colour” (they’re Canadian, thus the ‘ou’s), an excellent “Bambi”, the exuberant pop of subsequent “Hot Tonight” (rock-channeling the likes of Miley Cyrus in the right way; the band had previously covered her on their covers album, Ten Songs, Ten Years, Ten Days – QRO review), and the killer old-school TPC going-into-the-encore break of “Boots of Danger (Wait Up)” and “Cheer It On”.

Early in the show, Monks had remarked that it was an early evening show, and returned quickly for the encore, mentioning that they had an 11:00 curfew (something else about Webster Hall, which then turns into a dance club, like an evil Cinderella in Central Time Zone). Going completely against the dance club grain, Monks told the crowd he was going to do an “experiment,” playing Elephant Shell single “Tessellate” completely acoustic, without any sort of P.A., just him, his acoustic guitar, and the crowd. This required the crowd to hush, which they did (Monks joked about the folks at the back bar, how he’d seen shows from such places, but needed them to be quiet for this), though would occasionally try to join in, and not just on the chorus – the “do-do-do-do do” attempt to mimic the keys quickly died down, while even Monks had to laugh at a later failed attempt to keep the beat with claps. Monks has played solo acoustic before, to mixed results (QRO photos), but this time pulled it off on what was otherwise a loud night, before the rest of the band returned to end it all with other favourite “Favourite Food” (points off for only having one ‘ou’) and very early hit, “Your English Is Good”.

When Tokyo Police Club began, they seemed to square the youthful music circle, having the energy of few years but not the annoyance-inducing nature of it (at the time it was attributed to them being from Canada – that was just a few years after the indie-rock ‘Canadian Invasion’, and years before Bieber slouched towards Bethlehem). And they’ve managed to keep that up, getting older but not cynical. 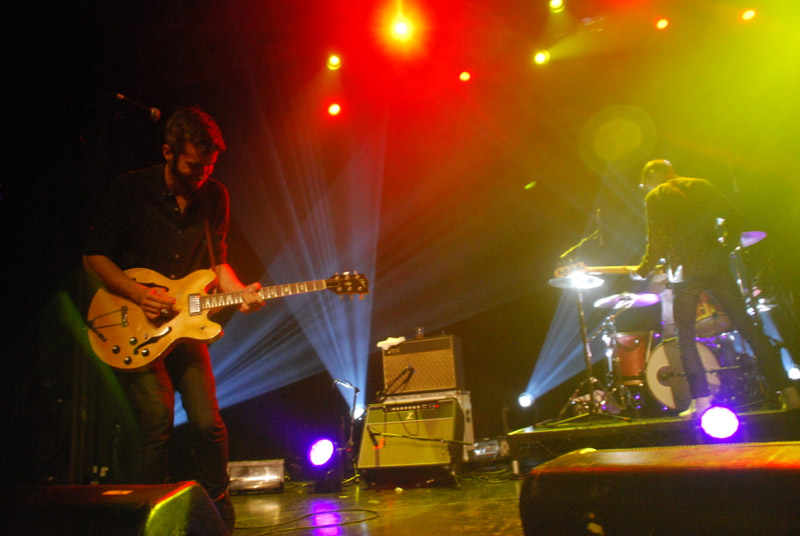