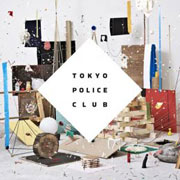 Somewhere along the line, Canada’s Tokyo Police Club got a reputation for being something ‘less than indie’.  The utter punk-catch of debut EP A Lesson In Crime, shows with mosh pits (QRO live review – okay, that was in Jersey…), playing Letterman (QRO Indie on Late Night TV), opening for Weezer (QRO photos of TPC, opening for Weezer) – but that last point may have a point, as Tokyo Police Club’s enjoyable indie-rock is more enjoyable than indie, akin to early period Weezer (QRO live review).  But what’s important is that it is enjoyable on sophomore full-length, Champ.

After the hook and success of A Lesson In Crime, plus digital EP Smith and non-album single "Your English Is Good" (QRO video), Tokyo Police Club’s 2008 debut full-length, Elephant Shell (QRO review), just couldn’t match up, as the band seemingly wasn’t sure exactly how much they wanted to grow up.  However, they seem to have found a much better balance on Champ – yes, not as hook-laden as their pre-LP work, but more so than Elephant, as it mixes the enjoyable with a building pressure.  "Favourite Colour" (they’re so Anglo with the ‘ou’s…), as well as single "Breakneck Speed" bring a welcome indie-pop/rock catch.  Opener "Favourite Food" and single "Boots of Danger (Wait Up)" go for the pressure, while "Big Difference" combines the two – and more than splits the difference.

Tokyo Police Club aren’t all toe-tapping upbeat, however.  There’s a relaxed rhythm to many pieces on Champ, such as ‘middle America high school kicking around’ "End of a Spark", though the penultimate "Not Sick" just can’t help but be cheery in its relax.  The band gets sadder with the proceeding rhythm of "Hands Reversed", and darker and more interesting (thanks to increased tech from keyboardist/guitarist Graham Wright – QRO interview) on "Bambi" – but do slip-up a bit with "Gone"; inexplicably the latest single, there’s a bit of ska up-stroke to the beat, and slightly strange keys from Wright, which don’t work as well with singer/bassist Dave Monks’ (QRO photos) vocals.

Weezer has declined a lot from their early self-titled records (QRO review of latest self-titled), but that’s partly because they had a long way to fall – and their alt-rock was never that ‘alt’ (QRO album review).  Tokyo Police Club can’t be as pitch-perfect catchy as the likes of "Say It Ain’t So" or "My Name Is Jonas" (but who can?), but they’re also more alt/indie.  More/most importantly, they put out enjoyable songs.