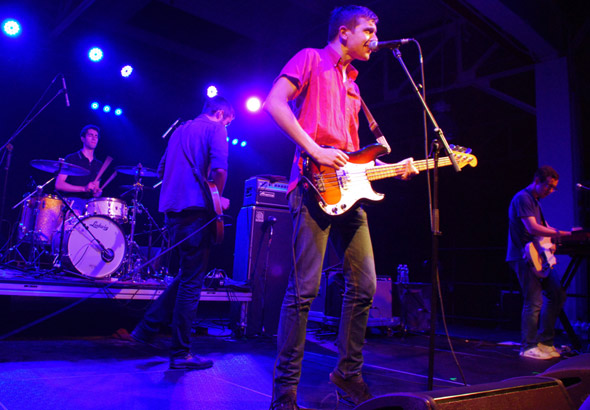 This summer in New York has seen many of the free events curtailed or eliminated.  River-to-River’s shows at South Street Seaport (QRO venue review) were knocked down to four this year (and the annual Fourth of July show at Battery Park – QRO venue review – was no more), while The Village Voice replaced its big Coney Island Siren Festival (QRO recap from last year) with the much smaller 4knots (QRO photos) at the Seaport this year.  And the post-McCarren Park (QRO venue review) Pool Parties of Williamsburg Waterfront (QRO venue review), plus last year’s new Gone to Governors on Governors Island (QRO venue review), didn’t return in ‘11.  Indeed, August’s Music To Know Festival on Long Island was cancelled (QRO preview of what would have been) – and Long Island’s Escape To New York Festival (QRO photos) the weekend prior hardly sold out (and it’s final day was cancelled due to rain).  But shoe company Vans has stretched out from supporting the Warped Tour (QRO review) by opening the ‘House of Vans’ (QRO venue review) near the East River in the Greenpoint-Williamsburg area of Brooklyn.  The line-ups have been of the punk variety, but the best was clearly on Thursday, August 18th, headlined by Tokyo Police Club – though that almost hurt their show. 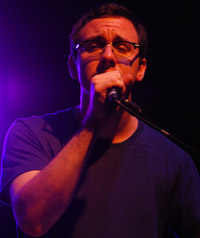 When a concert is organized by the venue, not part of a tour or a proper festival, the line-up can often be a scattershot, as the venue just wants to get the most people to the place as possible – different-appealing acts actually bring in more people.  And when it’s free, that only adds another non-musical cook in the works, as whoever is sponsoring it – i.e., whoever is actually paying for the event – has their own input.  For something sponsored by local government (such as Celebrate Brooklyn! at Prospect Park Bandshell – QRO venue review), there’s a desire for diversity (lots of world music).  For something sponsored by mainstream corporations (such as Wall Street’s River-to-River), there’s a desire for class (lots of classical, opera, Broadway, etc.).  And both want a certain not-to-offensive nature – the Williamsburg Waterfront Pool Parties were stopped almost before they began when the first show was to feature Canada’s Fucked Up (QRO photos).  But for Vans House Parties, offensiveness is fine (indeed, Fucked Up played one House Party – QRO review); the main angle is to appeal to the young punks who care about sneakers and go to skate parks, which is what the actual House of Vans is. 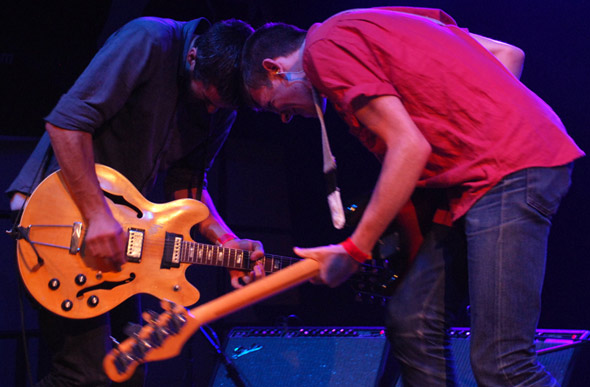 House of Vans thankfully didn’t go the emo route, but the punk was decidedly skewing young, save for a few ‘veterans’ like Superchunk (QRO live review) or Cro-Mags (QRO live review), or new bands with old folks like OFF! (QRO photos) with Keith Morris of Circle Jerks & Black Flag.  The August 18th show went young, and relatively hyped, as well as stocking the bill with five acts, Tokyo Police Club, Against Me!, Big Freedia, Japanther, and Team Robespierre.  But these were not ‘similar’ bands – Team Robespierre are excitable locals, Japanther an extremely rowdy guitar-and-drums duo, Big Freedia a gay-friendly ‘New Orleans bounce’ operation, Against Me! somewhat aging north Florida agit-punk band, and Tokyo Police Club a Canadian mixture of indie & punk.  This all drew a huge line well before doors, despite an intermittent rainstorm (some of that line might have been because the venue perhaps didn’t want to fill the place to capacity, given that over half the skate park space was outdoors).  However, it also meant that people were there for one of the bands, not the whole line-up – and thus might leave early.  Many Brooklyn bloggers were there to catch the borough’s own Japanther (QRO photos) & Team Robespierre (despite both acts playing the borough all the time…), while those with wider tastes may have only been there for post-Katrina ass-party that is Big Freedia (QRO photos).  Plus either Against Me! (QRO photos) or Tokyo Police Club could have headlined the show all by themselves.  Thus, a lot of people actually left by the time Tokyo Police Club came on. 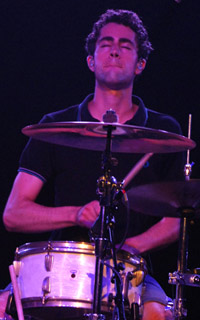 Also working against the Canadians was that House of Vans ran out of beer.  The event offered free Heineken (not unlike the WIRED Store holiday party TPC played in NYC last December – QRO review).  The alcohol had to be free, to get around liquor license laws (as well as the show having to be RSVP-only, though anyone 21+ could RSVP for the entire series of Vans House Parties) – indeed, they were prohibited from selling any, or even making change so you could tip the bartenders.  All this meant that, when they ran out of Heineken during Against Me!, the fans had no drinking options save water (also sponsored – some pseudo-ironic ‘boxed water’, water in a milk carton…).  Even the VIP area ran out – or rather, closed out, as the space was still serving after the main area’s beer had run out (albeit a packed VIP area, thanks to it now being the only source of alcohol), until a staff member came in and announced that the space was closed.  ‘VIP areas’ are kind of a joke these days, just something to make people feel special without giving them backstage access (and backstage did still have drinks – there were people in the crowd with them right up until the end of the night), but it still didn’t make one feel like a ‘very important person’ when some anonymous staffer shuts down the only special thing your given, without any warning, before the headliner had even started… 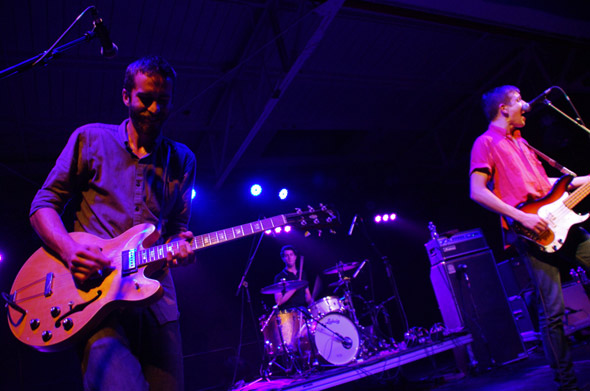 But enough bitchin’ – Tokyo Police Club were great!  The band has always had a rather broad appeal, from skate-punks to indie-hipsters, but that’s correspondingly threatened to be a thin appeal – skate-punks don’t want to listen to the same music as indie-hipsters, and vice-versa.  That kind of width works better in Canada, where alternative bands can get on mainstream radio (state funding helps, too…), but is tougher in the massive, segmented American market.  Their set (QRO photos) at Montreal’s Osheaga Music Festival (QRO recap) was better received than theirs at Bamboozle at Giants Stadium, for instance.  By the time the group took the stage at House of Vans, the skate-punk haters, the indie-hipster haters, and those just there for the booze had left (including whoever had started a fight with one guy hitting another in the head with a skateboard) – and those that were there got a great set from TPC.  The band played newer material like "Breakneck Spee" from Champ (QRO review), but also older songs that first got fans hooked, such as closing with "Your English Is Good", and encoring with their signature "Cheer It On".  And singer/bassist Dave Monks got the crowd to clap- & ooh-along to "Wait Up (Boots of Danger)".

Monks also mentioned that the band will be embarking on ‘Ten Songs. Ten Hours. Ten Days. Ten Years.’ covers project: recording ten cover songs from the years 2001-2010 over the course of ten days, spending ten hours at Red Bull Studios Los Angeles each day (the songs premiere starting tomorrow, August 24th, at www.polaroid.com/tokyopoliceclub) – even threatened a Miley Cyrus cover, getting the crowd to, "Give it up for Miley!"  Another way to get sponsored (can’t live on the Factor Program alone…); another way to catch a great band for free. 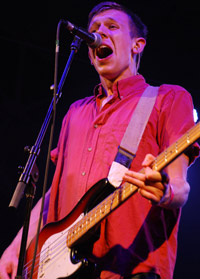