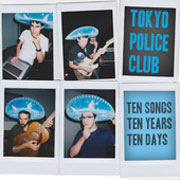 Covers albums are usually made to tribute an influential band of yore, often done as a compilation by various artists, but sometimes one band can cover another (such as Shonen Knife’s Osaka Ramones – QRO review).  Even when it’s one artist covering many, it’s usually in tribute to a bygone era, like Grant Lee Phillips’ nineteeneighties.  But the members of Tokyo Police Club are a young bunch, born in the eighties, too young to remember much of the start of the nineties (though they’ve undoubtedly heard Nevermind), so there’s only one decade for them to pay tribute to: the one that just passed, the decade we never named, which the group did in a short ten days, one song for each year, holed up at Red Bull Studios in Los Angeles this past fall, for Ten Days Ten Covers Ten Years.

Though Tokyo are often labeled as indie, they’ve always been bordering on the mainstream (such as playing 2011’s Bamboozle Festival), and have long professed love for more mainstream music (though it seems like every alt act nowadays say they also love Britney or Kanye…) – they even performed with rapper Matisyahu last December (QRO photos).  So it’s no surprise that the band chose more mainstream chart hits for their twenty-first century covers project – but what is surprising is how well they do them.  Starting in 2001 with Moby’s (QRO live review) “Southside”, songs that you can still remember being sick of are refreshing and enjoyable.  “Southside” had the benefit of being from Moby, and replacing his vocalist Gwen Stefani (“I don’t know what a ‘Hollaback Girl’ is, but I know I want her dead” – Brian on Family Guy) with Morgan Kibby of M83 (QRO album review), but Tokyo take Moby’s high-livin’ piece is given a loss-spin.  Kelly Clarkson’s “Sing U Been Gone” (2004) wasn’t actually a bad song, but Tokyo make it an actually pretty decent one.  And last year’s “Party In The U.S.A.” by Miley Cyrus (It’s Miley!) becomes a relaxed summer jam with shout-outs to the States and the Provinces from the actually-Canadian Club (“Northwest Territories!”).

Still, it’s the quality of the original that determines the quality of the cover.  The Strokes’ (QRO album review) near-reggae “Under Control” (2003) is even more laid-back and unimportant, while the stoner rock of Queens of the Stone Age’s “Little Sister” (2005) can’t really be lifted out of the muddle.  But “Sweetness”, the 2002 breakthrough/still-best song by Jimmy Eat World (QRO live review), is still a great song even if you don’t like emo, though Tokyo & guest Michael Angelakos of Passion Pit (QRO album review) can’t do a whole lot more with it.  Similarly, their covers of Phoenix’s (QRO live review) “Long Distance Call” (2006), LCD Soundsystem’s (QRO live review) “All My Friends” (2007), and M83’s own “Kim & Jessie” (2008) are all good, but not really improved.

Special mention must be made by QRO of our clear favourite song choice, 2009’s “Strictly Game” by the late Harlem Shakes (QRO spotlight on).  QRO was crushed when the Brooklyn band broke up right when they were reaching higher (QRO Tribute to the Harlem Shakes), and any revival of them gets the warmest of welcomes.

No covers record is really ‘essential’, but Tokyo Police Club have at least done something relatively new and certainly enjoyable on Ten Days Ten Covers Ten Songs (and in record time, too…).