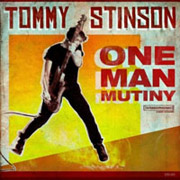 Tommy Stinson will forever be known for his work in other people’s bands.  The first line on his bio is and always will be “bassist for The Replacements” – indeed, he was the only one to last in the seminal eighties punk band (QRO re-releases review) from start-to-finish alongside singer/songwriter Paul Westerberg.  More recently, he’s been the bassist for Axel Rose’s Guns ‘n’ Roses, including on the long-delayed Chinese Democracy.  And after the tragic loss to cancer of Soul Asylum’s (QRO photos) Karl Mueller, he’s been the bassist for that other great Minneapolis outfit.

Stinson’s solo work, however, has not held up as well.  His post-‘Mats Bash & Pop lasted for only one album, and post-Bash Perfect for only two.  His 2004 solo debut Village Gorilla Head got more traction, but Stinson still seemed destined to be a great role player, not a leading man.  Sophomore solo record One Man Mutiny doesn’t entirely change this notion, as his country-garage is not new – who isn’t going country and/or garage these days? – but he does it pretty well.

Click here for photos of Tommy Stinson at 2015 Newport Folk Festival in Newport, RI in the QRO Concert Photo Gallery

Click here for photos of Tommy Stinson at ‘Big Star’s Third‘ at SXSW 2012 in Austin, TX in the QRO Concert Photo Gallery

Click here for photos of Tommy Stinson at Double Door in Chicago, IL on May 21st, 2011 in the QRO Concert Photo Gallery

One thing One Man Mutiny does lack is a standout track – there’s nothing on it that screams, “Single!”  However, there are still a number of solid pieces, starting with the dirty blues of openers “Don’t Deserve You” and “It’s a Drag”.  Stinson also does the country-garage rock well on “All This Way For Nothing” and the more relaxed “Seize the Moment”.  However, the twang seems maybe a step too far in the pedal steel “Zero To Stupid” and honky-tonk “Match Made In Heaven”, while Stinson comes off too earnest on “Destroy Me” and the title track.  The record is also not helped by having these four pieces as its four final tracks.

MP3 Stream: “All This Way For Nothing”