Tord Øverland Knudsen of The Wombats

While stopping off in New York City to preview their new album 'Glitterbug', Tord Øverland Knudsen of The Wombats talked to QRO.... 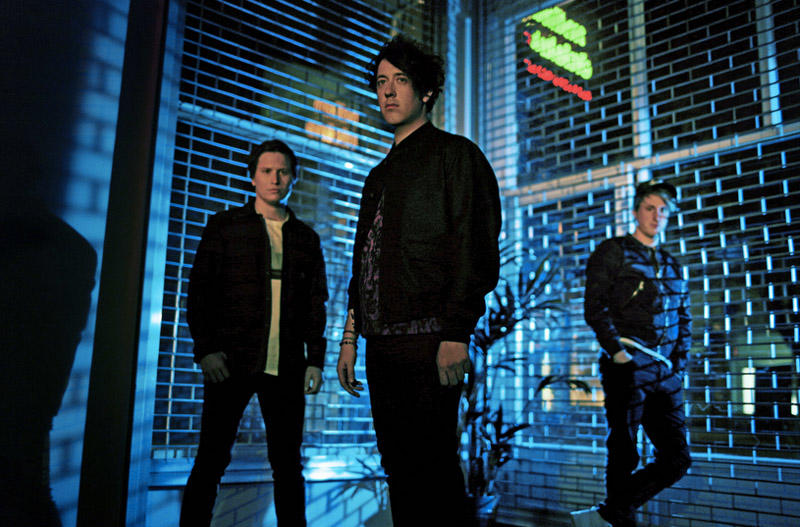 While stopping off in New York City to preview their new album Glitterbug, Tord Øverland Knudsen of The Wombats talked to QRO. In the conversation, the bassist discussed the album, its Los Angeles inspiration, it’s progression from their debut record A Guide To Love, Loss & Desperation and sophomore release This Modern Glitch (QRO review), returning to the stage, unfortunately finding out some songs don’t fit on a record (even if they share the same name), and more…

How are you feeling about being back?

Tord Øverland Knudsen: Absolutely buzzing, really. It feels a bit strange being back on stage, most of these songs have only been played three or four times so far. But I’m still really excited about playing live.

QRO: Did you ever find yourself thinking about how you’d present this album to the world while you were making it or after it was finished?

TK: Definitely not during. Even after it was released it was more of a thing we left to label and such like that. It’s gotten to a point now where we’ll kind of be holed up in the studio, and wondering if there’ll be an audience waiting for us. [laughs] So usually our time is spent just making songs that’ll keep people interested in us.

QRO: But it is a pretty good position to be in, right? You’re about to release a third album, so there definitely is an audience.

TK: Yeah, that’s true. I think the time gap just does our heads in a bit. It’s not lost on us that it’s been a couple of years since our last album, and even though I wouldn’t take anything back on how this album was made, it still can be maddening at times being away for so long. But the great part is that most of our shows have sold out, so people still clearly care and that feels really great to know it.

QRO: There’s quite a bit that a title such as ‘Glitterbug’ could allude to. I read how L.A. was a major inspiration for you on this album as well. How did that come about?

TK: Well, Murph [Matthew Murphy, singer/guitarist] was living there for a while, he really found himself ingrained there unexpectedly. It’s funny as well because L.A. isn’t a place I took to right away. Nothing against L.A. or the people or anything at all, it’s just I’d always feel a sense of unease going there when we’d go the first couple of times. It wasn’t until our fourth or fifth visit where I started to feel more comfortable there and able to get about and such. L.A. is such a weird place to be in, but it’s also a very unique place as well.

So with Glitterbug it was kind of accumulation of things Murph went through. He had a girlfriend when he first moved there but then they split up, so it’s almost like he had to find his footing while being in such a foreign place. If you’re British, there’s no place that could feel more foreign to you than L.A. It’s a place where myth and reality just coexist in such a seamless way. So the new album has quite a bit of element of that, kind of being a fish out of water. But Murph did eventually meet someone new and with that there’s a bit of a hopeful quality to it all. So it’s almost…

QRO: That sounds cinematic in a way, no?

TK: Yeah, exactly! That was quite unintentional really but I’m really proud with how it’s all come out in the end.

The Wombats playing “Moving To New York” live at Bowery Ballroom in New York, NY on May 31st, 2011:

QRO: What do you think it was that made you take a while to warming up to L.A.?

TK: It’s going to sound strange, but L.A. always felt like a place you have to ‘figure out’, and it can do your head in trying to do that. But after a while you learn to just take L.A. as it is, and yeah, they’re myths pertaining to L.A. that end up being true, but for the most part it’s just a really interesting place to be in.

QRO: When reading up on the album I was quite struck by the themes of envy and struggle that the album will have. Even though the album is about the city, how personal are the tracks to your own life experiences?

TK: Well Murph’s girl troubles were a key factor of course, [laughs] but also that essence of being far from home, and just… not to sound too cheesy or anything, but when you’re in a new surrounding you really do have to learn how to be yourself again in a way. But yeah, the level of comfort we started to feel towards L.A. now is very special to us, and it just brought us closer as a band. Every album has done that for us but the bond just keeps getting stronger.

The Wombats playing “Tokyo (Vampires and Wolves)” live at Bowery Ballroom in New York, NY on May 31st, 2011:

QRO: Does the album feel finished, now that recording has ended?

TK: Not at all. [laughs] There wasn’t a euphoric feeling that came about once the album was done, because we knew the mixing for it would be quite extensive.

QRO: Does mixing an album end up changing an album that much? For example: do songs ever get left out because of mixing?

TK: Absolutely. That happens a lot actually. Sometimes you’ll mix a song four or even five times before it becomes obvious that the song just can’t fit with the album. It’s quite annoying when that happens, especially because when it comes to mixing you’re entrusting someone else with your work. There’s a massive level of trust that goes along with it but it is necessary.

QRO: Any tracks off album that you’re sad to see left off?

TK: Yeah we have a track called “Glitterbug” that ended up being scraped. It just didn’t end up fitting with the album, even though it shares its name with the album.

QRO: Maybe you’ll release it as a b-side?

TK: [laughs] Possibly, though that might end up confusing people a great deal.

If you’re British, there’s no place that could feel more foreign to you than L.A.

QRO: Something I’ve always admired about you guys is how you never sacrifice fun for emotional weight; usually you do a great job of combining the two. Would you say that element of fun is almost essential to the band?

TK: It absolutely is. I don’t think we really ever start an album with firm intentions but I think we always aim to make pop songs no matter. Pop songs are like our middle ground in a way. [laughs] But we do also have a firm belief in doing things that are different, that if you’re not changing things up than what’s the point?

QRO: I can definitely see that with how you guys have progressed. This Modern Glitch is a different beast than your debut, but it still felt like a natural progression, even though the songs sounded bigger.

TK: That’s a great thing to hear. It’s what we were initially aiming for with that album and with this one [Glitterbug]; we just wanted to take that a step further. We wanted to look at keyboards and layering and such in a different way. When it’s all said and done I don’t know if the tracks reflect that so much. They’re a bit more…

TK: No exactly. A lot of them are immediate songs but I think it’s just a bit… sorry, it’s hard to put into words. The songs aren’t as brash as our debut album, and some of the songs are a bit on the softer side, but what we’re happy about is that there’s a lot going in in most of the songs, so there’s always something for you to latch onto when you listen to the album.

QRO: Lastly, has the new album changed the live show that much or are you still bouncing about happily on stage?

TK: It hasn’t changed insanely yet, at least in terms of energy. We just go out there and attempt to have as much fun as possible. We’re really just dying to play these songs as much as we can!

The Wombats’ video for “Greek Tragedy” from Glitterbug: