Update: Toronto Island Music Festival has been made part of North-by-Northeast, the Canadian music industry fest taking place all that week in venues across Toronto – First 250 NXNE wristbands at the ferry get in for free! 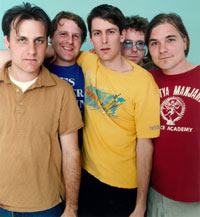 It’s the reunion we’ve all been waiting for.  Ever since the Pixies (QRO live review) kicked off the eighties/nineties alt-rock reunion trend in 2004 at Coachella (well, really first was Mission of Burma – QRO live review), they’ve been coming at a pretty good clip (see: Dinosaur Jr.  – QRO live review), but one everyone had been hoping for was Pavement.  The acclaimed indie-rock act split up ten years ago, with singer/guitarist Stephen Malkmus going his own way alongside his Jicks (QRO live review).  Deluxe edition re-releases of prior records like Brighten the Corners (QRO re-release review) and Wowee Zowee (QRO re-release review) did keep the flame burning, but the rumored reunion seemed like just that – a rumor.

Until September 2009, when the news finally broke that the reunion was real.  It started with the announcement of four shows at Central Park SummerStage (QRO venue review) for September of 2010 (QRO concert listings) – which sold out immediately (a fifth was recently added/sold-out – QRO concert listing – at Williamsburg Waterfront – QRO venue review).  Since then, they’ve made it a full-fledged reunion tour, starting earlier this year in New Zealand, and are hitting up festivals all over the world, including headlining Toronto Island.

What brought about the reunion?  The anniversary?  The money?  Greatest hits record, Quarantine the Past (QRO review)?  Singer/guitarist/Malkmus rival Scott Kannenberg coming back solo, using Pavement-era moniker Spiral Stairs on The Real Feel (QRO review)?  Jick Janet Weiss reforming her old band, including new member/Jick Joanna Bolme, Quasi (QRO interview), leaving Malkmus free?  Malkmus no longer being the coolest ex-member of Pavement, since bassist Mark Ibold joined Sonic Youth (QRO live review) full-time on The Eternal (QRO review)?  Or did everyone just get tired of them asking about a reunion?

Whatever the reason, the dream has become reality. 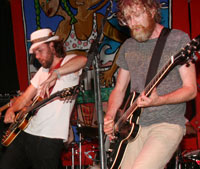 Since being part of the indie-rock ‘Canadian Invasion’ of 2003/2004, Toronto’s own Broken Social Scene (QRO photos) have also become one of the most sought-after festival bands in the alternative music arena, whether indoors at industry showcases (QRO photos at a festival) or outdoors at more traditional fests (QRO photos outdoors at a festival), to the point where they’re headlining (QRO photos headlining a festival).  Fronted by singer/guitarists Kevin Drew and Brendan Canning (QRO interview), this giant collective includes The Apostle of Hustle, Andrew Whiteman (QRO interview), Do Make Say Think’s Charles Spearin (QRO interview), and a rotating female vocalist spot that’s included Metric’s Emily Haines (QRO live review), Leslie Feist (QRO live review), and Land of Talk’s Elizabeth Powell (QRO interview).  While the previous releases were ‘BSS Presents:’ albums focused on Drew (Spirit If… – QRO review) and Canning (Something For All of Us… – QRO review), last month’s Forgiveness Rock Record (QRO review) is a return to the Broken Social Scene (QRO photos outdoors at a festival), and their live show (QRO live review) has included everything from Spearin’s fascinating Happiness Project (QRO review) to the old ‘hits’ like "K.C. Accidental" (QRO video) and "Fire Eyed Boy" (QRO video).

Broken Social Scene are curating this year’s Toronto Island, after playing it every year – except not only the cancelled 2009 (they played a free show at Harbourfront to make it up to everyone), but also 2008 (muscled out in the Canada department by friends Stars – QRO live review).  So welcome the too-long-awaited return to Olympic Island of the Scene! 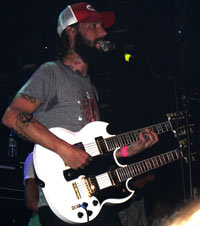 Before the current, unceasing wave of alt-country, there was Seattle’s Band of Horses (QRO live review), who broke through with debut Everything All the Time and "Funeral" in 2006.  While guitarist/co-founder Matt Brooke left after that, singer/guitarist Ben Bridwell kept on the trail, with the following year’s Cease to Begin (QRO review).  Band of Horses (QRO photos at a festival) dropped a little off the radar following that, but are back with Infinite Arms last month, and now at Toronto Island. 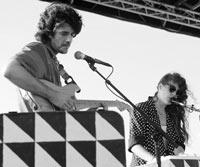 The guitar-and-keys pair of Victoria Legrand and Alex Scally may hail from Baltimore, but there’s a Francophile expanse to Beach House (QRO photos).  2008’s Devotion (QRO review) earned them many fans that felt that way, and this year’s Teen Dream (QRO review) is already being shortlisted for ‘albums of the year’.  But will the sweet sounds work as well in the bright sunlight (QRO photos outdoors)?

Note: Legrand is also an in-demand guest female vocalist, such as on "Slow Life", the contribution by Grizzly Bear (QRO photos on bill with Beach House) to the Twilight: New Moon soundtrack (QRO review), so she might just appear back on stage later in the evening with Broken Social Scene (see above) – though she didn’t when the two acts fested together (QRO photos at the festival) at Coney Island’s Siren Music Festival in 2008 (QRO recap). 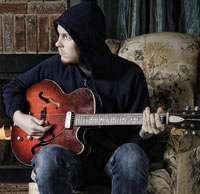 Brooklin, Ontario’s Taylor Kirk goes the stripped, alt-folk sound that they seem to know better how to do in Canada than anywhere else, as Timber Timbre, most recently with last year’s self-titled Arts & Crafts debut. 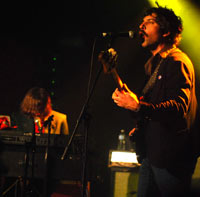 Be sure to get to Olympic Island right at gates (and not just if you’re trying to get in with your NXNE wristband…), for the ‘Toronto Revue’, featuring three of the city’s up-and-coming acts, the roots/country of The Beauties (just out with their self-titled debut), whiskey-soaked power trio Flash Lightnin’, and the re-rocking seventies of Zeus (QRO photos at a festival), out with their own debut, Say Us (QRO review), and recently back from the Bonfire Ball Revue (QRO live review) with Bahamas & ex-Scenester Jason Collett (QRO spotlight on).