To the sound of steam, pistons and gears, Train hit the stage at Kansas City’s Starlight Theater and reminded everyone there exactly what it takes to run a band... 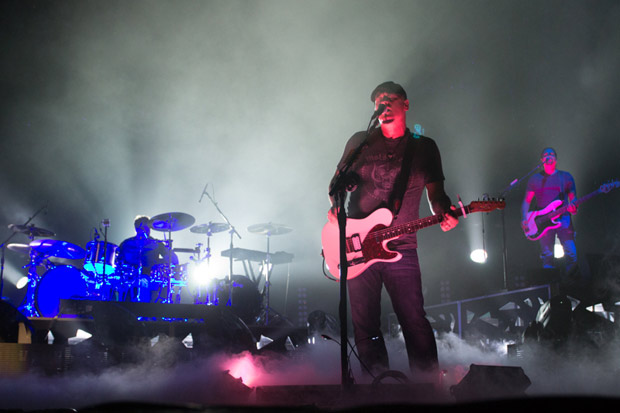 Click here for photos of Train at Shoreline Amphitheater in Mountain View, CA on July 8th, 2017 in the QRO Concert Photo Gallery

Click here for photos of Train at MusicFest 2010 in Clark, NJ in the QRO Concert Photo Gallery

To the sound of steam, pistons and gears, Train hit the stage at Kansas City’s Starlight Theater on Saturday, July 20th, and reminded everyone there exactly what it takes to run a band with longevity.  Now granted, California 37 (QRO review) and Drops of Jupiter are two very different animals, but it would be more than a little difficult to try and place one song above the other.

Train gave a wonderful exhibition of old and new, delivering the very best of their expansive discography, giving no regard to chronology.  The highlights were, of course, “Meet Virginia”, “Free”, “Mermaid”, “California 37”, “Mary Me”, and the encore, “Drops of Jupiter”.  Whether or not Train delivered an emotionally charged set filled with hit songs and superb musicianship is barely even worth addressing.  Those who know the band well ought to expect nothing less. 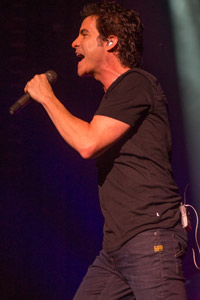 Ashley Monroe was there, by the way.  You know, the high, clear voice on California 37’s “Bruises”?  She joined singer Pat Monahan on stage for a perfect recitation of the masterfully written duet, which was immediately followed by one of her very own originals – a modern country tune called “Weed Instead of Roses” – that seemed to combine various country clichés with a loosely associated BD/SM motif.  It was just a touch out-of-place.  That being said, Miss Monroe did perform marvelously.  She’s got a strong, charismatic stage presence with a voice to back her play.  Her most recent album, Like a Rose, was released on March 5th, and is well worth exploring.  It was produced by Vince Gill, for crying out loud! 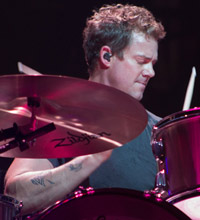 Right, so back to Train.  Did you guys know that you can play dubstep on drums?  Well you can’t.  Nobody told Scott Underwood that, though, because he did it, and it was marvelous.  What started out as an out-of-character electronic dance track being piped in through the P.A. system evolved into a monstrous drum solo that crested like a tidal wave and crashed back down onto the audience at just the right length.  It was the only fitting segue between Monroe’s country action and “California 37”. 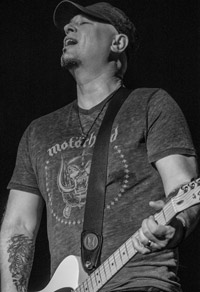 Monahan is a phenomenally nice guy, by the way.  He signed t-shirts that he promptly gave away, to his merchandise staff’s dismay.  He took selfies with a dozen different cell phones borrowed from audience members – even taking the time to wait for one fan to unlock her iPhone before handing it to him.  In between songs, he shouted, “I saw you give that shirt to that little boy, sir, so I want to give you another one.”  And the rest of the band waited while he distributed yet another freebie.  Monahan managed all of this while singing, displaying with ease the various ways to hold a microphone and sing effectively while both hands are preoccupied with something else.

Many excellent bands came and went in the ‘90s.  Despite the radical evolution of musical demand in the last two decades, popular themes rising and falling, and the total shift in genre dominance, Train is still here, and they’re still putting on phenomenal shows.  Hit one of their dates, and you’ll want to name your next three children Pat, Jimmy, and Scott. 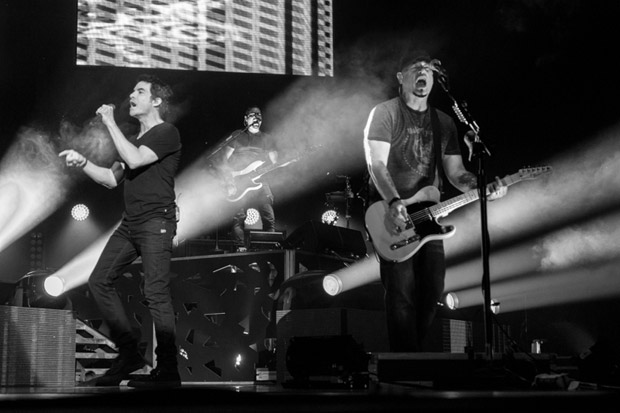 Editors – The Weight of Your Love