Travis – Everything At Once

'Everything At Once' keeps up Travis' grand return.... 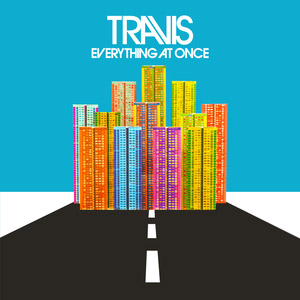 2013’s Where You Stand (QRO review) was a decided return for Travis, as the British band came back from a hiatus, and returned to their uplifting, grand style. Everything At Once largely keeps that up, with more of a dichotomy between brightness and dark.

Brightness and uplift definitely start the record, on “What Will Come”, and in that song and pieces such as “Animals”, it is Travis’ best side. They can do relaxed, like the catchy sing-along “Magnificent Time” or the swinger “3 Miles High”, but there are also moments when the group gets into the shade. “Idlewild” probably does it best, featuring guest vocal contribution from Josephine Oniyama, but Everything is mostly a big & up album – see the following up-with-life closer, “Strangers On a Train”.

It’s been a long time since Travis could compete with the likes of Coldplay (but hey, at least no one in the band had to spend time married to Gwyneth Paltrow…), but with Everything At Once, the group stays grand.