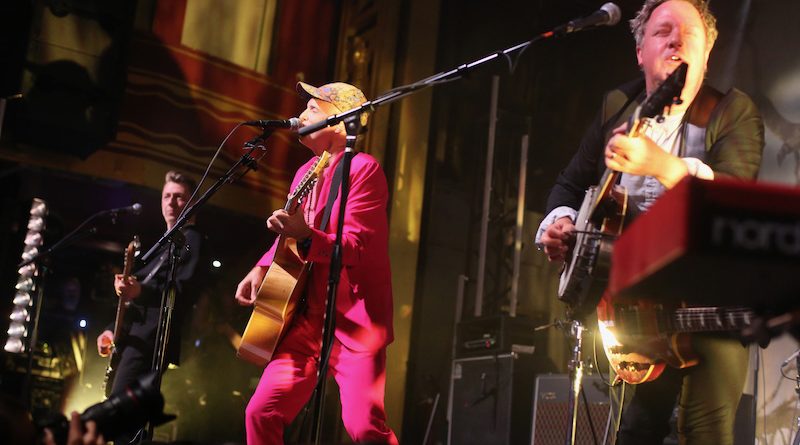 Click here for all of QRO’s coverage of Travis in QRO’s ‘Spotlight On : Travis’ feature

In 1999, Glasgow’s Travis broke out of the Brit-pop pack with the massive success of The Man Who, and follow it up two years later with the similarly successful The Invisible Band. In 2019, the band played a special run of 20th anniversary shows for The Man, and this year have been doing (COVID-delayed) similar for The Invisible. On Tuesday, November 8th, they brought the Band and more to New York’s Webster Hall.

Doing the ‘play the album in full’ thing is always tricky. What worked as a track list way back when might not work live now (some acts switch up the set list, like Broken Social Scene did with their own fifteenth anniversary of You Forgot It In People just weeks earlier at Webster Hall – QRO review). Some of those songs might have only ever been played rarely & a long time ago, or even never at all. A whole record is rarely enough for a whole show, but how do you work after playing the album in full – there are other singles that one ‘has’ to play, but leaves precious little time for newer material. Oh, and add in for this case that it wasn’t their most-beloved hit breakthrough, but the still-loved, but just-couldn’t-match follow-up.

But the boys from Glasgow know how to deliver. The Invisible Band’s track list worked well as a set list, perhaps front-loaded like most records – the album/night started with the album’s hit single, “Sing” – but even enough in quality as to not have dips. And the group was still very into playing the old stuff, something that is not always the case. Indeed, they were particularly excited to play some of the rarer songs, such as “Flowers In the Window”.

Also, frontman Fran Healy was in fine Scottish form with his stage banter. There’s a thing with bands from northern England or Scotland, where they’re very funny & appealing on stage. Some of that are their accents, no doubt, but as the late fellow funny Scottish frontman Scott Hutchison of Frightened Rabbit told QRO, “There’s something about Scottish and northern English people, that they don’t have the same self-awareness. Quite happy to take a piss out of themselves and be the joke” (QRO interview). While playing The Invisible Band, Healy had numerous funny stories & asides before songs, making feel close even songs you didn’t know as well as “Sing”. He pointed out that “Side” was about being forced to take sides, inspired by the Catholic/Protestant divide in his native Glasgow, but extended to the politics of that American election night (which he promised to keep out, and which the show was a great respite from). Apparently Harry Styles wants “Flowers” played at his funeral. Healy went back to his youth, being taught “social dancing,” for “Follow the Light”. And his first remarks to the crowd were about how special it was to be playing The Invisible Band in New York, as it had come out in 2001, “I don’t know you if you remember, it was a bad year in this city.” They then weren’t sure if they should play their Fall ’01 show booked at Radio City Music Hall, asking the message boards (2001 was an era of message boards), and getting a resounding, “Yes!”

But after the band finished out Invisible, left the stage, and returned, came Healy’s best story – where he admitted to basically ripping off Oasis’ massive hit “Wonderwall” to create Travis’ own big hit, The Man Who’s “Writing To Reach You”. Healy showed how similar the chorus chords are, acknowledged mentioning “Wonderwall” in “Writing” just to make it clear, and told of opening for Oasis on tour, where a judgmental Noel Gallagher would watch them play “Writing” from the side of the stage. Indeed, the band segued into and out of “Wonderwall” during “Writing”, without dropping a note (the crowd singing along for it all).

The second half of the set did naturally include The Man Who hits like “Writing”, “Driftwood”, “Turn”, and “Why Does It Always Rain on Me?” If you’d missed their Man Who tour and couldn’t help but think that you wished you’d caught it [like your correspondent], you got your fix, in addition to a renewed appreciation of The Invisible Band.

Travis peppered in a few post-Invisible songs in the back end of the evening, though notably nothing from 2020’s pandemic era 10 Songs (QRO review). Healy had complained to QRO about the ‘write an album, record it, release it, tour, repeat’ circle of band life (QRO interview), so perhaps this was a way to break that cycle, in addition to 10 Songs having been two particularly long years ago.

Oh, and after getting the crowd to pogo to “Rain”, Travis returned for an encore, with “Happy” from their overshadowed (and not as successful) more rock 1997 debut, Good Feeling – and a cover of AC/DC’s iconic “Back In Black”, both just in case you forgot that sweet Travis are still a rock band.

It might never been 2001 (or 1999) again, but it was a packed Webster Hall (QRO venue review), including a lot of working class British accents – more Andy Serkis Andor prisoner than the elitist Imperial Security Bureau stiff-necks. All ready to “Sing”.