Travis – Where You Stand

Travis have returned (in full) to their original, grander style, in the well-honed Where You Stand.... 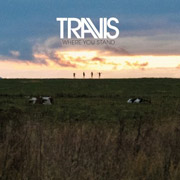 There was a time, around the turn of the century/millennium, when Glasgow’s Travis paved the way for emotional, more wrought Britpop – only to be passed by on that road by the likes of Coldplay (QRO album review) and others.  The band shifted further into sadness in the twenty-first century, losing not only their large American audience but eventually even their British one by the time of 2008’s Ode To J. Smith.  Frontman Fran Healy went on a solo journey, and it seemed that even time had passed Travis by.

Well, now they have returned (in full) to their original, grander style, in the well-honed Where You Stand.

Whereas Ode hewed towards the rock (and was a too-quick follow-up to the prior year’s The Boy With No Name), and such earlier twenty-first century records as 12 Memories got sorrowful, Stand opens up with uplift in “Mother” and “Moving”.  On this album, Travis leaven the touching & intimate (“Reminder”) and wistful (“Boxes”) with that uplift.  There are also hints in the backbeat of both country (“Warning Sign”) and indietronica (“Moving”) – though the band shouldn’t try to be as chill as “New Shoes”, and the piano-man Healy only goes so far on closer “The Big Screen”.

It’ll never be 1999 and New Labour again, and Travis will never become a world-girdling, starlet-marrying, Apple-bearing colossus – but even better is that the band is recapturing the emotional core that touched you in the first place.