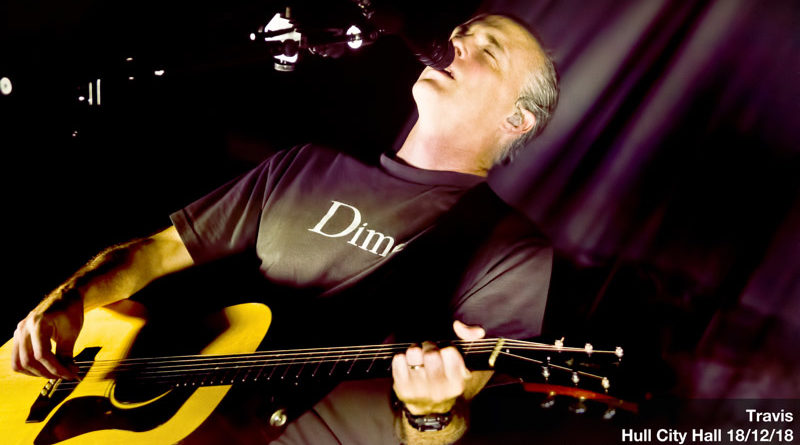 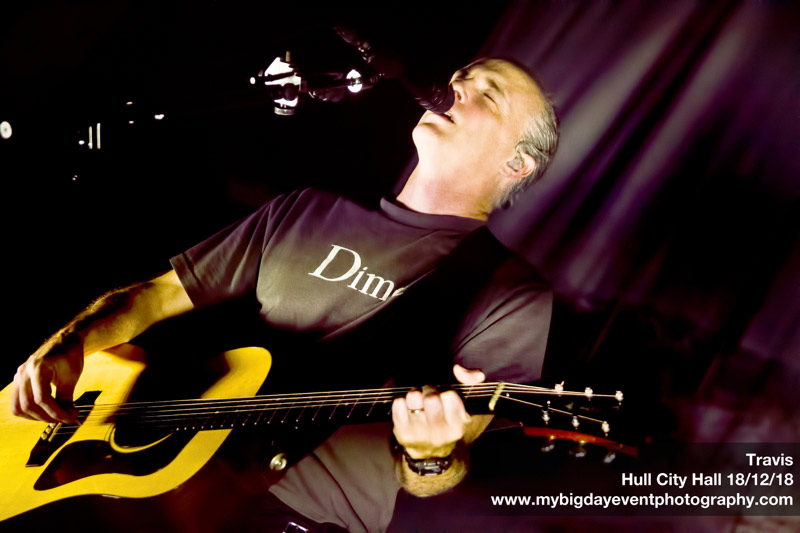 The album anniversary celebration tour. It’s become a traditional part of the whole post-music ownership revolution and sometimes, if we’re being honest, it can seem like a bit of a cynical marketing person’s excuse for a money spinner, along with a reissue, remaster, a ‘let’s chuck in the cuttings off the floor as bonus tracks and a few photos that didn’t make the cut the first time round.’ We’ve all been there.

But when you get an album that’s really special, that probably changed lives, a bit at least, and then the happy birthday show can be a joy to attend. And in this context you’re not going to find any much better than Travis’s The Man Who, which the band have been touring for its twentieth birthday throughout 2018. That tour came to Hull City Hall on Tuesday, December 18th.

The album was widely criticized at the time of its release for its melodic melancholia, qualities seen by some as a betrayal of the abrasive in your face of many of the critically favoured Britpop superstars, and there’s still an unpleasant review on the BBC music website, but the years have been kinder to Travis than to many of their contemporaries. In the darkened City Hall, with a huge reimagining of that album cover (has any ever looked bleaker?) and the simplest of lighting set ups throwing harsh white light and dark shadows (mostly shadows) onto the band the atmosphere is reverential, almost sepulchral. Which is not to suggest that people hadn’t come along to enjoy themselves, rather that The Man Who seems to stand in people’s memories as something fragile and important and they are wary of seeing it’s memory toyed with.

It’s an album that marks the change from a world dominated by Oasis to one where the big players were Coldplay and Radiohead, from a world where songs were written to amuse drunken children to grown-ups with a full range of emotions and vocabulary.

It was a quiet show, not too much chat from the band, although Fran Healy, resplendent in a grey kilt, did have a rather good story about making one of the Gallaghers (Liam, I think, but I could be wrong) with a backstage rendition of “Luv”.

How do you pick favourites from a set of songs that seem so precious? It’s as tough as it sounds. From the moment the first chords of “Writing To Reach You” broke over the crowded room everyone just seemed to go quiet. There were odd pockets of dancing, but that was probably a few Oasis fans that had snuck in. The rest of the assembled company seemed to have come mostly to listen politely. Obviously “Driftwood”, “Why Does It Always Rain On Me”, “Writing”, and “The Fear” were big moments, because they were the ones that everybody loved, but also because they were the ones that first captured our hearts. Then “As You Are” and “The Last of the Laughter” as they made us feel like true fans because we knew the words within a few days of the release, and no one else did, but in truth every song on the album takes you back to wherever you first heard it, and of course whoever you first heard it with.

And when at the end of the first half of the set the backdrop fell away to leave a stage, where the bonus track “Blue Flashing Lights” played out it was like a secret message from the band to us directly. You remember. We know you remember.

The second of the show visited a few highlights from other albums including The Invisible Band (18 years old this year, hair on its top lip, and ripe for a revival tour of its own very soon one would think) for “Flowers In the Window”, and The Boy With No Name for “Closer” and “My Eyes”, but we all knew that the main business of the evening had been and gone.

Outside on the street people were singing as we leave and there’s a lot of love in the air. Nobody looks even slightly melancholic. Thanks for a great night, guys. 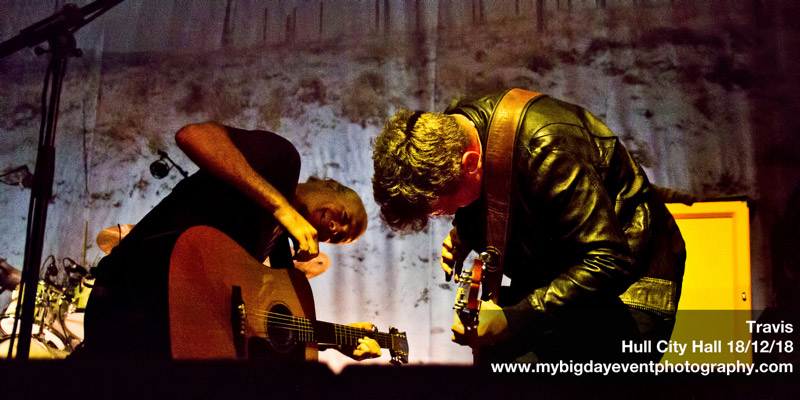