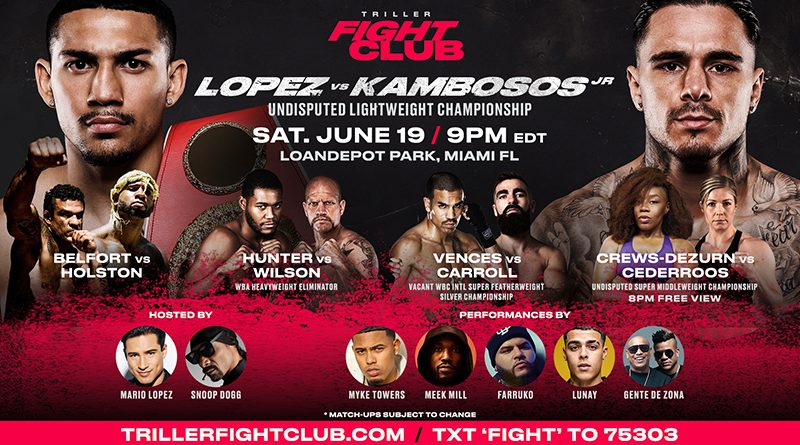 COVID is going into the rearview mirror and we’re all looking to get back to big live events with massive crowds. This Saturday, June 19th, big-name boxing and big-name music come in the form of Triller Fight Club to LoanDepot Park in Miami, with giant top match, stacked undercard, stacked music line-up, even special celebrity hosts!

The title card match is a big one with Brooklyn’s ‘The Takeover’ Teofimo Lopez (16-0, 12 KOs), in his first defense of his Undisputed Lightweight World Titles (WBC, WBA, WBO, IBF, RING). He’ll be up against Mandatory Challenger ‘Ferocious’ George Kambosos Jr. (19-0, 10 Kos) of Sydney.

Co-featured on the main card with the competition for the Women’s Super-Middleweight Undisputed World Title, Franchon ‘The Heavy Hitting Diva’ Crews-Dezurn (7-1, 2 KOs), the holder of the WBO/WBC belts, challenging the WBA/IBF title holder Erin Cederroos (8-0, 4 KOs).

The undercard will see 2016 U.S. Olympian Charles ‘Bad News’ Conwell (14-0, 11 KOs) of Cleveland making his move up the professional world rankings when he faces off against Mark ‘The Bazooka’ DeLuca (27-2, 15 KOs) of Witman, MA.

Musicians have long been fans of the sweet science, and now they will be performing at the event!

It’s all produced by So You Think You Can Dance co-creator Nigel Lythgoe, and will also include Miami salsa dancers and massive pyrotechnics. The concert is going to include a surprise performance of a never-before-and-never-again duet.

Oh, and the whole thing will be hosted by TV heartthrob for forever Mario Lopez and the iconic Snoop Dogg, who, among his many other accomplishments, is a Triller Fight Club partner.

Prices range from $50 to $3,000 and include options from VIP ringside seats to traditional seats in the stadium (home of Miami Marlins) upper and lower bowls, as well as seats near the two entertainment stages on either side of the ring, positioned at the pitcher’s mound. FITE, the world’s premier streaming PPV platform for sports and entertainment recently acquired by TrillerNet, will handle worldwide live pay-per-view streaming distribution online for the June 19 event, and via FITE mobile and Smart TV apps, game controllers and all major OTT devices. For tickets, PPV, and information, visit www.TrillerFightClub.com.