<img src="http://www.qromag.com/wp-content/uploads/2010/02/trumanpeyotelightlightning.jpg" alt=" " />The 21st century is beautiful and its name is Truman Peyote. ... 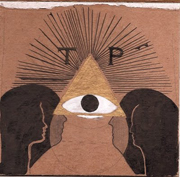 The 21st century is beautiful and its name is Truman Peyote.  On their recent release, Light-Lightning, two guys from Jamaica Plains, Massachusetts have created a sound that so successfully melds the textural possibilities of the digital and analog, of samples, founds sounds, and live instrumentation, that the album is less like a hybrid and more like a brand new species.  Acts like Aphex Twin may have trailblazed the path, and still others like Animal Collective (QRO album review) may be getting more press, but Truman Peyote proves this sound is more than just an isolated phenomenon.  The dam has burst and a new zeitgeist is upon us.  After listening to the ten tracks on Light-Lightning, caroming ingeniously between cosmic psych-noise and infectious pop, you’ll wonder why the hell it took so long.

Truman Peyote gained some nice traction at the end of 2009 via a spotlight on the track "New Wife, New Life" by the Website-Which-Must-Not-Be-Named (rhymes with ‘bitchspork’).  The electro-hippie vibe of the song played up to the near hysterical adoration for Animal Collective at the time.  It was a nice ‘we can do it too’ moment, but don’t listen to Truman Peyote expecting an Animal Collective tribute band.  Light-Lightning is a much more savage, inchoate experience than Merriweather Post Pavilion (QRO review).  Novel sounds and melodies morph at the speed of life, like fetal cells, exploding with alien possibility in an electronic placenta.  Often the transformation is violent: tracks "Fishscraps" and "Firetime = Snowday" cultivate unique ambient signatures, beats and all, and then suddenly lapse into minimalist or found sound digressions.  These songs are not highways; they’re more like the historic quarter of an old European city, full of alleys, nooks, niches, and sometimes dead ends.

A good touch point for Light-Lightning is another ‘L-L’ album, Losing Losers by Lou Barlow (QRO photos – under the ‘Sentridoh’ moniker).  This epic double LP was a sonic collage of countless micro-ditties, even shorter than a Jay Reatard (QRO photos) number, squashed together and sunk into a fantastic cloud of lo-fi haze.  Like Barlow, Truman Peyote have an ear for fantastic melodies (but that’s too restrictive; let’s call them ‘sound patterns’); and like Losing Losers, Light-Lightning refuses to articulate these patterns unto the point of death.  Songs bubble up, effervesce, and retreat back into the froth without ever giving themselves completely to a reductive comprehension.  In short, these songs are elusive in the way that (theoretically) popular music rarely is.

"New Wife, New Life" is a great song, but the ease with which it falls into the listener’s aural register belies the real intrigue of the album.  The most exciting songs on Light-Lightning are the ones where Truman Peyote elicits a certain expectation, and then dramatically overturns it without warning.  If the pair, Caleb Johannes and Eric Farber, produced an entire album like the song "Beantown", they could do quite well as the afore-mentioned Animal Collective cover band; if they did the same with the last half of "Sarah Delta" as source material, they would make a fantastic Aphex Twin rip-off.  But they do neither.  Or rather, they do both and more, piling invention upon invention like an impossible musical Jenga, having created in Light-Lightning a towering, polyglot structure that should fall to pieces but somehow never does.  A remarkable achievement.