There's no one quite like Merrill Garbus, the singer-songwriter behind tUnE-yArDs, who performed to an enthusiastic crowd for her taping of Austin City Limits.... 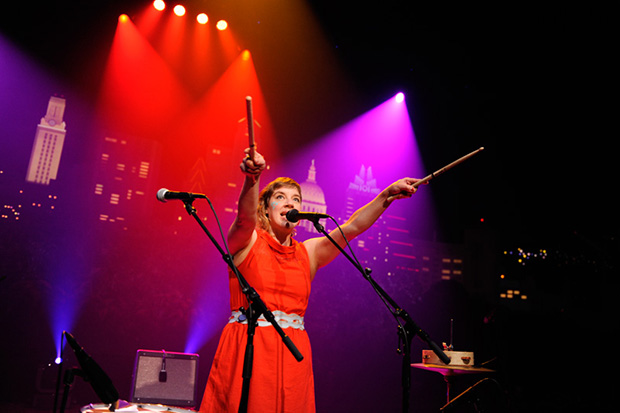 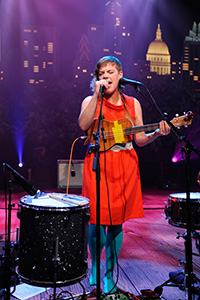 Drums pound out tribal beats, saxophone sirens wail, and a voice filled urgency and intensity asks the audience, “Do you want to live?” followed by trills, calls, yells and chants.  There’s no one quite like Merrill Garbus, the singer-songwriter behind tUnE-yArDs, who performed to an enthusiastic crowd on May 29th for her taping of Austin City Limits to be aired as part of their 38th season on PBS.

Garbus’ unique style is an intricate working of her minimalist drum set, ukulele and looping system, which she uses to create loops and layer of rhythms and harmonies that grow into beautiful cacophonous sound.  None of her recordings, which have garnered quite a bit of praise, can do justice to the thrill and intensity of her live performance and she did not let the crowd at the Moody Theater down.  By the end of the first song, she had the audience engaged in lively call and response.  We did, indeed, want to live.

Her demeanor is sweet and humble, claiming, “I am the person I am because of PBS.”  Musically, nothing holds her back.  She is backed by Nate Brenner on electric bass and occasional percussion, who helps her create her experimental, indie-rock, pop, afro- beat, jazz.  Of course the man sitting next to me said it best when he shook his head and smiled, “She is one of a kind.”  Garbus is one of a kind, sounding at times like a T.S. Eliot poem in melodic form, and spitting out lyrics like, “There is a freedom in violence that I don’t understand and like I’ve never felt before.”  Her music often carries with it a sense of urgency as she lyrically grapples with darker themes.  Her vocals loop in wails and saxophones add to the siren call.

The saxophonists were each painted with Garbus’ signature bright line across the face.  They are part of her experimental, dissonant, defiant tribe of music working out the darker side of things.  She holds the mic out to the crowd encouraging us to wail out from our own deep recesses.  We are part of this tribe too.

The show was loud and energetic, ending with an enthusiastic version of “You Yes You” where she sang out, “Now that everything is going to be okay,” a resolution to the musical conflict of the night and an entire audience jumping in frivolous ecstasy. 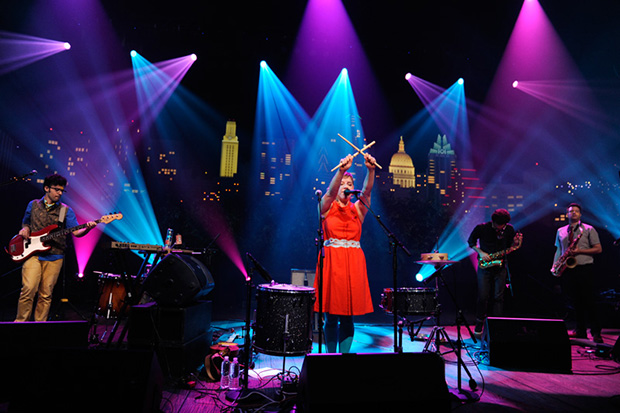