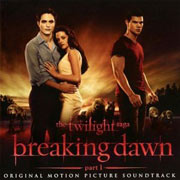 While the music industry is still seriously suffering thanks to the internet, the movie industry ain’t, and so films you’d never go see have been getting great, often original soundtracks with some great artists of today.  Exhibit #1 is the Twilight saga – despite being blockbusters, you probably (hopefully) haven’t seen any of them if you’re old enough to drink (hell, if you’re old enough to drive…), but they’ve put out some great original soundtracks, with artists like Death Cab for Cutie (QRO album review) and Metric (QRO live review) contributing strong songs.  But for the fourth in the saga, Breaking Dawn, Part 1, the soundtrack gets a lot closer in style – and quality – to the film series.

There are a few good, even great songs on Breaking Dawn, and the soundtrack starts off well with “Endtapes” by The Joy Formidable (QRO live review), which sees the great up-and-coming alt-rock band at their most introspective.  Angus & Julia Stone follow that up with “Love Will Take You”, sweet & sad, yet neither over- nor under-done.  And The Features (QRO live review) kill it with “From Now On”, yet another great slice of southern alt-rock from this should-be-huge band.

But too much – much too much – of Breaking Dawn is more like the third song, “It Will Rain”, by Bruno Mars.  What the siblings Stone balanced right, Mars overweighs into an overwrought torch song – and he’s joined in this by the likes of Sleeping At Last (“Turning Page”), Cider Sky (“Northern Lights”), Imperial Mammoth (“Requiem on Water”), Mia Maestro (“Lloverá”), and even Iron & Wine’s (QRO live review) “Flightless Bird, American Mouth”, which has all the sickly sweetness of a Christmas song.  Even decent songs like Christina Perri’s “A Thousand Years” and Theophilus London’s (QRO live review) “Neighbors” get hurt by the connotation with the film series (Twilight hip-hop?…) – only Aqualung (QRO spotlight on) & Lucy Schwartz actually deliver good stripped-down goods, in the haunting “Cold”.

While the soundtrack to the first Twilight had the likes of Paramore, that of the second (QRO review) shocked hipsters by containing everyone from Death Cab to Thom Yorke of Radiohead (QRO album review).  The soundtrack for Eclipse (QRO review) wasn’t as good as New Moon, but still a strong collection – it is only with Breaking Dawn that the soundtracks match the saga.  I guess hipsters are Team Edward…

MP3 Stream: “From Now On” (The Features)