<img src="http://www.qromag.com/wp-content/uploads/2009/12/twilightnewmoonsoundtrack.jpg" alt=" " />While you're sick of Twilight, the soundtrack to New Moon is indie, not teen-o, and has some choice gems. ... 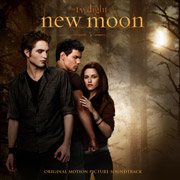 You were probably (hopefully) sick of the Twilight Saga long before sequel New Moon came out, and it has only gotten worse since then.  But spare just a moment for the movie’s soundtrack, which shies away from the emo-mainstream of Twilight‘s female fans, and instead is stocked primarily with better-known names in the indie-sphere.  Twilight: New Moon Soundtrack may be a patchwork jumble, and certainly doesn’t justify the film, but has more than enough gems.

The primary gem is the leadoff track/single “Meet Me On the Equinox”, from Death Cab for Cutie (QRO album review).  The pressing expanse pushes right into Death Cab emotion – the only pity is that, of all the artists on the soundtrack, Death Cab is the one least needing the exposure (though perhaps they can become one of those rare indie-rock ‘gateway bands’ for/from the young mainstream).  In general, the best songs are from the best artists: “Hearing Damage” by Thom Yorke (of Radiohead – QRO album review – as if you needed to be told…) brings an echo-haunt-tronica (actually rather reminiscent of the solo work by the singer from another successful, though not nearly as iconic, indie-rock act, Paul Banks of Interpol – QRO album review – as Julian Plenti – QRO tour review); Bon Iver (QRO album review) & St. Vincent (QRO spotlight on) – a.k.a. Justin Vernon & Annie Clark – combine for the stripped soul-baring to an empty room “Roslyn” (though it’s more Iver than Vincent); Grizzly Bear (QRO live review) employ Victoria Legrand of Beach House (QRO album review) for the orchestral beauty of “Slow Life”; Editors (QRO album review) strip to an epic Anglo New Wave voice on penultimate “No Sound But the Wind”.

Meanwhile, the weaker artists deliver weaker pieces – but there’s no embarrassing teeny-mainstream act on the soundtrack: Band of Skulls give an emo-indie straight procession with “Friends”; “A White Demon Love Song” is some sub-Beatles sad pop with echo from The Killers (QRO album review); the stripped alt-pop from OK Go has unnecessary tech effects on “Shooting the Moon”.  And in between the best & worst, some artists rise, some fall: Lykke Li (QRO album review) & Anya Marina fail to really impress with their reverbed harmonies on “Possibility” & “Satellite Heart” (respectively), but the engaging rhythm in charming mono-procession to “Monsters” justifies the extra attention given to Hurricane Bells (QRO album review) – the solo side project from Steve Schiltz of Longwave (QRO album review) – thanks to the artist’s inclusion on the soundtrack.

While the general sadness & dark outlook intended to come from Twilight: New Moon is reflected on the soundtrack, it’s done far better by these musicians than in the actual teen flick, and there’s little else that connects the two, just some monster and/or moon imagery & piano score closer “New Moon (The Meadow)” by the film’s composer Alexandre Desplat.  And it’s certainly nice that these artists are getting the exposure of being on a #1 album.  So don’t feel you’re losing any indie-cred by getting it – though maybe just download it, as then you won’t have to look at the cover, with the vampire’s sucked-in cheeks, the werewolf’s CGI-ed abs, and the vacant stare from that girl who isn’t good enough for either of them.

Julian Plenti : On Tour in Europe

Parkas : You Should Have Killed Us When You Had The Chance