There was a tipping point in the early ‘90s when Sunny Day Real Estate reintroduced the idea of an ultra-polished, complex composition to post-punk.... 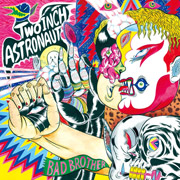 There was a tipping point in the early ‘90s when Sunny Day Real Estate reintroduced the idea of an ultra-polished, complex composition to post-punk.  Before them it felt like a screeching, muddled mess of hardcore and their attention to songwriting combined with the skill to reign in unruly distortion and unmanageable arrangements felt new.  Even though emo has evolved into a genre delivered by unmentionable bands, the shift into complex and epic songwriting in the middle ‘90s from Jawbox or Mineral are at the roots of Two Inch Astronaut’s latest album Bad Brother on Exploding in Sound Records.

On the first track, “Swol”, Sam Rosenberg opens with his a-cappella harmony in a conscious effort to begin the album with a very precise attention to detail that reflects the hours of rehearsal.  Sam’s layers of harmony recall Weezer’s tighter, soaring moments from the Blue album (QRO live review), but Two Inch never dwells there, moving on, enamored with their latest progression and preparing for an abrupt stop.  They proceed without a hint of delay or spatial effects that would disrupt their clean, detached sound.  “Spank Jail” has a tougher approach to their bombastic guitar delivery.  Full of crunches, stops and inspired head banging that drops to a distorted bass line and spirited, yelling vocals getting bigger into this chorus, like they’ve been saving the best for last.  The trick is making it seem like they aren’t.  Every measure is as full out as loud as possible with as much emotion and energy as they can muster while the guitar work goes from heavy, solid thrusts to delicate free noise jazz bursts.  It’s an impressive combination floating between these modes of attack on the instrument.  They’re looking at the bigger picture, treating that rhythm guitar as a buttressed support one minute and slicing it up under a microscope the next.  Like on “Probe”, where jazzy brushes on the snare and delicate delayed guitar weaves in time to the twitchy rhythm.  In case it isn’t clear yet, there’s a lot of music math involved, and it constantly makes you aware of the effort that must go into these arrangements.

Their Dinosaur Jr.-like focus to the tight, compressed distortion and its range of emotion becomes lofty, pounded out riffs of pure exploration when no one is looking.  Like label mates Fat History Month (QRO live review), they are equally as obsessed with the dynamics of each piece ranging from pin drop silence to a solid wave peaking from top to bottom.  “Blood From a Loyal Hound” jabs at abbreviated chords and full stops just to remind you of that silence.  Notes bellow in the lower end of this track and the precise strum patterns are impossible to follow, making sure you don’t ever feel comfortable.  It’s always changing, demanding your attention.  They build to emotional peaks, the one thing they can’t plan in their accounting ledger arrangement.  You have to have faith that at the end of this a connection, reaching deep, is going to exist.  They never allow themselves but a fraction of a seconds rest and even that’s spent calculating the next wall of sound, the loud and heavy distortions coming together into something bigger than itself.  “Check the Yard” also introduces an essential post-punk element: suburban sprawl.  They’re simultaneously speaking to something so specific lyrically about “…looking in the yard,” talking about a specific place but the exact details about what is deliberately unclear.  It’s as if he doesn’t know what he even wants yet, but it’s definitely not going to happen here.  Lyric is the one area they seem to inject uncertainty into.  The way he delivers “Fuck off” with a surrendering quality before switching to the aggressive insult.  Recorded in a tiled back room, parts are hardly audible in their quietness, asking himself rhetorical questions about success.

It’s funny how often you don’t see this coming and even less at this impressive volume.  They seem to pull off this huge sound over and over without it ever feeling tired.  Bad Brother is so perfectly clean; they don’t leave a single moment to point to as a crack in the armor.  They’re a solid force of highly trained telepathic friends forging an impassable wall at any volume.  They have summoned crazy magic in the control room; the way guitars are doubled with undertones of bass rumbling in perfect time with the shiny upper layers of controlled distortions as shocking as a single frame of high-speed film.

“He was our boy” is let off the leash, at least in the opening lines of almost free-sounding crunches, before being reined back into their quick equations, like a few hundred songs chopped up and reassembled in the most death defying ways possible.  The sound of a palmed chord halting the ringing of sustain.  A reflection of a mechanical age of 1s and 0s, the unrestrained vocal is attempting to recover that human element.  When you’re finished being impressed by their technical prowess you can give in to abandoning complicated thought.  Bad Brother is the kind of soundtrack that takes over a subway ride, obliterating the loudest squealing brakes from beginning to end.  They’ve created a consistent hard and tight explosive set of distortions and Rosenberg’s fusion with vocal harmonies is the pitch perfect contemporary equivalent to that shift Sunny Day Real Estate made taking hardcore in a serious and complex direction.

Courtesy Tier – “In Some Dreams” and “Cold”