Tyler, The Creator has some strange things going on inside his head.... 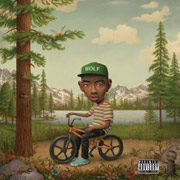 Tyler, The Creator has some strange things going on inside his head.  Take a gander at his Instagram feed.  When it’s not filled with pictures of his latest FatBurger receipt, you’ll mostly see candid snapshots of random, strange looking people.  He doesn’t really give much away.  Every so often a pic of something that’s actually happening in his life will crop up, a screenshot of an album he’s listening to or some Golf Wang-ed out wall in his house.  Even his show on Cartoon Network’s Adult Swim, Loiter Squad, is so bathed in youthful irony and reckless abandon that it only buries him further underneath that green hat he always wears.  Sometimes it seems that Tyler is all about shock value.

Click here for photos of Tyler, the Creator at 2018 Lollapalooza in Chicago, IL in the QRO Concert Photo Gallery

Click here for photos of Tyler, the Creator at 2018 Boston Calling in Boston, MA in the QRO Concert Photo Gallery

Click here for photos of Tyler, the Creator at 2014 Governors Ball in New York, NY in the QRO Concert Photo Gallery

Click here for QRO’s review of Odd Future at The Granada in Lawrence, KS on September 19th, 2012

Wolf is Tyler’s third album.  It’s his follow up to 2011’s Goblin (QRO review), a slight disappointment after the major underground hit that was Bastard.  The things that drew so much attention to Bastard at times could go conspicuously missing on Goblin; it felt less like a cohesive work, and more like a hodgepodge of tracks compiled to capitalize on newfound notoriety.  Maybe the pressure from XL Recordings to produce an album rushed him through his artistic process, who knows?  It doesn’t really matter, the album is still one of the best hip-hop efforts in recent years, so what if it wasn’t that ‘next level shit’ we were all expecting?

Wolf is that next level shit.  No lie.  Wolf shows a return to restraint for Tyler.  The Golf Wang is a crazy group of hyped up kids.  Watch Loiter Squad, which should tell you all you really need to know about the level of reckless abandon that courses through the veins of the young LA crew.  Go see an Odd Future show.  It’s an absolute madhouse; the performers spend almost as much time stage diving as they do actually performing.  Nuance, craft, and introspective verse fall victim to youthful abandon.

But with Wolf, Tyler pulls the old tricks out, with silky smooth tracks like “Bimmer” and “Treehome95”.  The latter surely belongs on a jazz compilation album rather than a 22-year-old’s hip-hop vision.  Tyler reminds us that he’s more than the growling, green-hatted leader of the Golf Wang; he’s also one of the most gifted producers and musical minds of our generation.

What’s new about this album is the amount of insight we get into the mind behind the music.  Tyler explores the concepts of newfound fame in “Colossus”, and some pretty deep daddy issues in “Answer”, which may turn out to be the most honest and cutting hip-hop track of the year.  Tyler seems a bit more intent on spitting what’s on his mind that he has in recent memory.  It makes sense- Wolf is the third session with his fictional therapist Dr. TC, as hinted at in the title track of Bastard.

In amongst all this seriousness and gut-spilling honesty are still moments where all control is lost.  “Domo23” is the banger that is required of all OF projects, although “Trashwang” and “Tamale” also have enough adrenaline pumping energy to incite riots among skater kids and hip-hop heads.

Wolf is exactly what we wanted from Tyler, The Creator.  It’s heavy; the beats are equal parts Wu-Tang and Star-Trak.  His verses strike a perfect balance of irony and honesty.  The guest verses are solid as always from his OF brethren, and the work of Erykah Badu and Pharrell is spectacular, and a coup for a young artist to feature such veterans on his album.  Wolf is Tyler’s best work to date and he accomplishes it, not through sheer force or shock value, but through fresh production, a calm flow, and that off-kilter vibe that is ever-present in the world Odd Future.