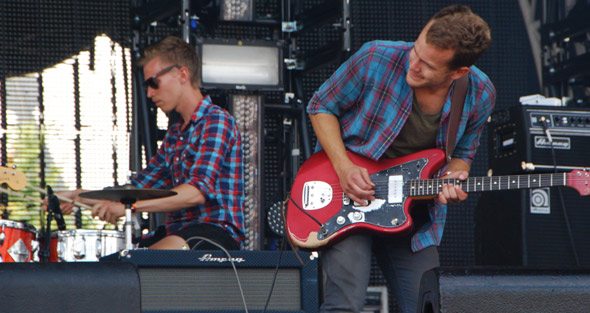 Click here for photos of Typhoon at Central Park SummerStage in New York, NY on September 16th, 2014 in the QRO Concert Photo Gallery

Click here for photos of Typhoon at 2014 High Sierra Music Festival in Quincy, CA in the QRO Concert Photo Gallery

It was a rainy night in Brooklyn on Wednesday, August 3rd when 150-odd souls gathered at Littlefield (QRO venue review) in Boerum Hill to hear Portland’s favorite big band.  Typhoon was midway through a successful cross-country tour where they graced the stages of Osheaga in Montreal (QRO recap), Lollapalooza in Chicago, and even the Ed Sullivan Theater for their network television debut on The Late Show with David Letterman that would air the following night (QRO Indie on Late Night TV).

By half past ten at Littlefield, Lady Lamb the Beekeeper had long finished their set and local rockers Diamond Doves were going through the motions of their closing jam.  Once Diamond Doves cleared the stage to steady applause, the size of the headlining group was hinted at by the wall of amps, forest of microphone stands, and yards of drums that already filled the modest bandstand without any human presence.

A calm half-hour of room swelling took place while extensive soundchecks were required for all of the mics and instruments that the band uses, from hand bells and ukuleles to flugelhorns and a cello.    The Portland big band flooded to the stage to polite adulation, and after some perfunctory remarks about it being the group’s first trip to Kings County, they launched into their opening number.  For those not familiar with Typhoon’s music, their blend of poppy ensemble-folk is reminiscent of similarly sized ensembles such as Edward Sharpe & The Magnetic Zeroes (QRO spotlight on), while singer, guitarist and songwriter, Kyle Morton, has the tender and intense qualities of Damien Rice.

While Morton is the creative engine of the group, it is the players who make up the spectacle, so with no further ado, the 13 members consist of: three horn players (trumpet, cornet, flugelhorn) two guitarists (including Morton), a bassist, two drummers, multi-purpose girl who does samples and hand bells, three string players (two violins and a cello), and a percussionist who rocks the aforementioned ukulele.  All members, save the drummers, sing at some point during their set, which just about hit the one-hour mark, tactfully leaving the fans wanting more.

Seeing all of these bodies crammed up on the stage begs the question, how much does it cost to move these folks across the country, and is it necessary?  The answer, at least to the second part, is, maybe, but not for the reason you’d expect.  At the end of a short seven-song set, there is an impression that the ensemble is largely underutilized.  Large portions of their show leave trumpeters clapping instead of blowing, string players plucking and not bowing, and everybody singing while the bass, guitar, and drums do the heavy lifting of actually playing music.  Even when every band member is actually playing his or her instrument, the result is often underwhelming.  A big band needs solid arrangements to ensure that group fires on all cylinders and keeps the audience’s attention, in Typhoon one suspects perhaps a lack of collaboration in the songwriting process among members and a single-mindedness in the final musical product.

That being said, the size of the group is also one of its greatest assets. Many of Typhoon’s songs resolve into anthemistic sing-along type moments, sometimes with multiple anthems confusingly clustered into the same song.  And when the crowd is either uninitiated or docile – the latter being largely the case on Wednesday night – it helps to have twelve friends with microphones standing behind you.  Their performance is like the best campfire jam session you’ve never had.  And therein lies the appeal of Typhoon, a gluten-free bakers dozen out Brooklyn-ing Brooklyn with their Grapes of Wrath look and country ways.