While 'Barking' might be a brighter Underworld, it's still the nineties dancetronic act you remember.... 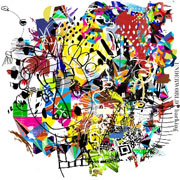 Underworld know how to not overstay their welcome.  The U.K. act could have easily gotten over-exposed after the Trainspotting success of “Born Slippy NUXX” made them one of the biggest bands in the then-still-finding-its-feet electronica genre – think what happened to The Prodigy after constantly hearing “Firestarter”.  Instead, they’ve put out new material just infrequently enough that each new record is a reminder of why you liked Underworld in the first place.  They’ve never changed their style too much, even after the 2002 departure of Darren Emerson left Karl Hyde & Rick Smith as a duo again, and while Barking might be a brighter Underworld, it’s still the nineties dancetronic act you remember.

“Bird 1” opens Barking as definitely Underworld, with pressing beats and smooth electronic sounds, though is a bit higher and lighter than prior work.  The group has long brought their sound up from the dance floor and towards the heavens, and lifts again with “Always Loved a Film”, “Scribble”, and “Diamond Jigsaw”.  Yes, it sounds like old Underworld, but it’s a great sound to have back.

Click here for photos of Underworld at 2015 NOS Primavera Sound in Oporto, Portugal in the QRO Concert Photo Gallery

Click here for photos of Underworld at Roseland Ballroom in New York, NY on October 27th, 2010 in the QRO Concert Photo Gallery

There are still darker tones on Barking, however, and those might just be the most interesting.  “Grace” is much more subtle and undercutting, change while still being Underworld, while there’s an ominous feel behind the following “Between Stars”.  The female vocals to “Moon in Water” give it a gliding nature, amid the darkness.  Only the slow, sad, and not dancetronic closer “Louisiana” feels out of place.

Just their third record of the twenty-first century, Barking still hews to the band’s nineties heyday, when there were a lot less electronic bands out there as competition.  But there’s a reason Underworld has managed to stay popular in the young, flash-in-the-pan electronica scene.